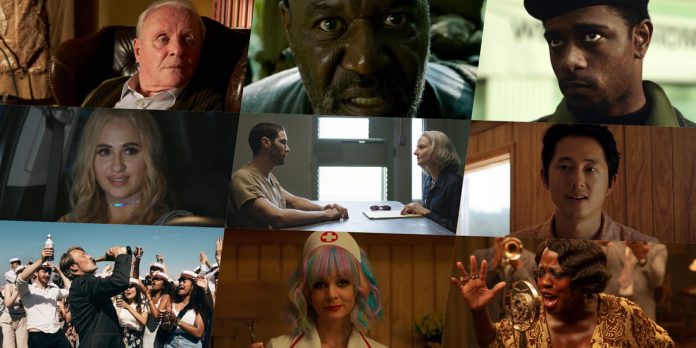 After a longer wait than ever, the nominations for the 93rd Academy Awards are here. With the chaos of 2020, it’s been a contentious and hard to predict season, but it’s now nearing an end. As always, there were plenty of big surprises, but thankfully, not too many egregious snubs this year. These nominations were, dare I say, actually pretty good?

​Let’s dive in and break them down!

MANK LEADS THE NOMINATIONS WITH 10
With ten nominations, “Mank” leads the nomination count as many expected. It landed nominations almost everywhere, including Picture, Director, Actor, Supporting Actress and plenty of craft categories. Its biggest miss of the morning was a fairly big one: Best Original Screenplay. It also missed Best Film Editing and Visual Effects, though this was a very strong showing for David Fincher’s latest. Outside of “Mank,” the Academy really spread the wealth, with no other film getting more than six nominations. “Nomadland,” “The Father,” “Judas and the Black Messiah,” “Sound of Metal,” “The Trial of the Chicago 7” and “Minari” all received six nominations.

MA RAINEY’S BLACK BOTTOM & ONE NIGHT IN MIAMI MISS PICTURE
While there were no shocking inclusions in the lineup for Best Picture, it was surprising to see “Ma Rainey’s Black Bottom” and “One Night in Miami” miss nominations here. They were both seen as top five contenders not terribly long ago but were eclipsed by other films throughout the season. This is a bit more surprising for Regina King’s “One Night in Miami,” which had scored a Best Director nomination at the Golden Globes. The Best Picture lineup included all the other expected contenders like “Nomadland,” “The Trial of the Chicago 7” and “Minari,” along with films that were on the bubble, like “The Father,” “Judas and the Black Messiah” and “Sound of Metal.”

NOMADLAND REMAINS THE FRONTRUNNER
After winning the majority of critics’ prizes, as well the Golden Globe and Critics’ Choice, “Nomadland” remains in a good position for a Best Picture win. “The Trial of the Chicago 7” has seemed like a strong challenger, but undoubtedly Aaron Sorkin’s snub in Best Director doesn’t help. Of course, “The Trial of the Chicago 7” could still win in the same vein as “Green Book” (which also didn’t receive a Best Director nomination) but “Nomadland” is looking unstoppable at this time. If anything, “Minari” could be a contender in second place, and with a strong campaign from A24, it could give “Nomadland” a run for its money.

LAKEITH STANFIELD NOMINATED FOR SUPPORTING ACTOR
Easily the biggest shock of the morning was in Best Supporting Actor. LaKeith Stanfield landed there for “Judas and the Black Messiah,” alongside his co-star Daniel Kaluuya. Stanfield hadn’t shown up at any precursor outside of a few smaller critics groups. More importantly, Warner Bros. had officially campaigned Stanfield as a Lead Actor, which makes this all the more surprising and a little confounding. That said, it’s extremely exciting for Stanfield to receive his first-ever nomination. “Judas and the Black Messiah” overperformed as a whole, scoring a solid six nominations, including a well-deserved first-time nomination for cinematographer Sean Bobbitt.

​TWO WOMEN IN DIRECTOR & AARON SORKIN MISSES
Long overdue history was made this morning in Best Director. Chloe Zhao and Emerald Fennell (“Promising Young Woman“) were both nominated, making this the first year with two female directing nominees. Zhao is also the first woman of Asian descent nominated in the category. Lee Isaac Chung became the first Asian-American nominated here as well. Additionally, alongside David Fincher, Thomas Vinterberg scored a somewhat surprising nomination for Denmark’s “Another Round,” bumping out presumed nominee, Aaron Sorkin. Some have been whispering that Sorkin was vulnerable in the category, and they were proven correct. Still, lots of broken ground here that is worth celebrating.

JODIE FOSTER MISSES BEST SUPPORTING ACTRESS
Finally, we have at least a bit of clarity with Supporting Actress. Jodie Foster’s shocking Golden Globe win threw this category for a loop, which was made all the worse by the insane BAFTA nominations. As it turns out, Foster followed in the footsteps of Aaron-Taylor Johnson for “Nocturnal Animals:” winning a Supporting Globe but missing the Oscars altogether. Maria Bakalova ended up getting nominated for her outrageously funny turn in “Borat Subsequent Moviefilm” (which also showed up in Best Adapted Screenplay, like the first one did), one of the few genuinely comedic performances ever nominated here. Glenn Close also scored her eighth nomination and would tie Peter O’Toole’s record for the most nominations without a win if she doesn’t prevail this year for her also Razzie-nomianted work in “Hillbilly Elegy.” It’s still anyone’s game for the win. I could see Youn (for “Minari“), Close, or Bakalova winning. This will be a tough race.

THE FATHER OVERPERFORMS
Despite an awards campaign that appeared to be lackluster, “The Father” scored a respectable six nominations, including a few relative surprises. Alongside its Picture, Actor, and Supporting Actress nominations, it scored in Adapted Screenplay, Editing, and Production Design. It felt like the steam was running out for this campaign, but it was certainly revived this morning.

Overall, one of the biggest surprises of this crop of nominees is that they’re fairly unsurprising. There were very few major snubs to speak of here, and instead, there were some pleasant surprises. All in all, most of the expected nominees are here. And now, we look forward to seeing who wins on April 25th!

How did you do on your predictions? What were the biggest snubs and surprises to you? Who do you think will win Best Picture? Let us know in the comments below or on our Twitter account. We will be updating the Predictions Pages on the site very soon.