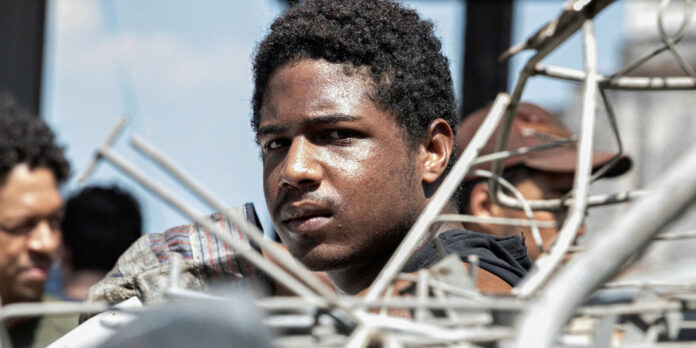 THE STORY – To provide a better life for his family, 18-year-old Mateus accepts a job in a junkyard in São Paulo, Brazil, where he and a few other boys become trapped in the dangerous world of human trafficking.
​
THE CAST – Christian Malheiros, Rodrigo Santoro, Cecília Homem de Mello, Josias Duarte, Vitor Julian, Clayton Mariano, Lucas Oranmian, Bruno Rocha & Dirce Thomaz

​Some films offer an escape from our difficult world, while others seek to excavate the uncomfortable truths that most are content to pretend are nonexistent. “7 Prisoners” absolutely falls into the latter classification. Everything about Alexandre Moratto’s drama operates in service of an oppressive, stressful tone that, appropriately, doesn’t let up across the course of the film. And while its villainous characters are broad in their unfathomably evil intentions, the magic trick of the film is the way it subtly but effectively shows how these individual misdeeds are both influenced by and contribute to the exploitative global economy.

The story begins in the almost-too-cheery family homestead of Mateus (Christian Malheiros). He has big dreams and a clever intellect, so like many ambitious young folks, he leaves his country home for the city’s opportunities. He and a small group of young men are employed at a São Paulo junkyard by Luca (Rodrigo Santoro), a seemingly caring boss who gives them living quarters and food. But things quickly turn sour for Mateus and his co-workers, as Luca’s true intentions are revealed. The young men are exploited to the point of essentially becoming victims of slavery. Mateus finds himself torn between his inherent desire to fight for what’s right and his need to provide for his family.

For this complex, complicated story to not immediately fall apart, a preternaturally good central performance is necessary. Luckily, Malheiros delivers stunning work. He’s precisely the type of strong-willed character that’s easy to root for, and the performance evokes pity without ever being pathetic. It would’ve been so easy for Malheiros to have his character descend into dead-eyed soullessness as the story progresses. Still, instead, the young actor wisely maintains a sympathetic, headstrong persona – which makes it even more difficult to witness the unseemly choices he goes on to make. He’s the perfect stand-in for the thousands of nameless, real-life people who are born into an unforgiving world and feel forced to make decisions that go against the very conscience with which we’re all born.

As “7 Prisoners” explores some of the darkest aspects of humanity, it only makes sense that the film is unrelentingly severe. There’s very little light peeking into the murky, depressing world in which the characters inhabit. Smartly, Moratto keeps the world of the film small and compact. The camera takes on a ground-level approach that makes the audience feel cloistered and stuck, much like the trapped young men the film follows. At times it can almost feel too harrowing, but to allow a release of tension would feel inauthentic and disingenuous to the story being told.

While the narrative focuses on the personal dilemmas faced by Mateus, the film’s greatest accomplishment is the seamless and understated way in which it ties this small-scale story into a worldwide issue. The main character struggles to make complex, immoral decisions in the name of survival, and Moratto’s vision doesn’t let him off the hook. While Mateus may think he’s making decisions that only affect him and those in his immediate vicinity, the film makes it clear that his choices create a ripple effect that extends out beyond the small part of the world he inhabits. His actions reflect, in miniature, the unethical deals and decisions that are made every day in the name of money and security. The film paints a depressingly realistic portrait of how, to function, the global economy relies on those most exploited. The rich get richer while those on the bottom are consistently taken advantage of – and the world keeps turning.

Alexandre Moratto’s “7 Prisoners” is a grim triumph. Anchored by a layered performance from Christian Malheiros, it portrays a world that is inarguably awful but speaks to the corrupt global business practices that nearly everyone regularly interacts with in one way or another. And most impressively of all, the film remains thrilling and engrossing throughout.