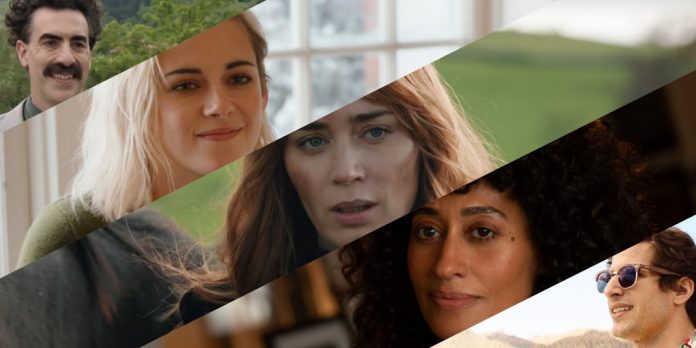 ​In a year like no other, as films are constantly being shuffled and re-distributed around the calendar, our current cinematic landscape does not leave much in the way of traditional award contenders. However, that has presented us with the opportunity to re-evaluate what types of films are deemed worthy of accolades and attention. In any year, I have always enjoyed seeing what the Golden Globes consider in their comedy/musical categories. From “Her” to “The Martian,” the Hollywood Foreign Press Association’s definition of comedy is often liberal, to say the least. But while this calendar year no longer sees contenders along with the likes of “West Side Story” or “In the Heights,” there are still a number of unique contenders to consider. ​

Having seen “The Prom” on Broadway, I can say with certainty that the upcoming Ryan Murphy film adaptation is essentially designed for the Hollywood Foreign Press Association. A star-studded feel-good musical about real and timely issues is not only what we need after this year, but frankly, what we deserve. Globe favorites Meryl Streep, James Corden and Nicole Kidman headline the cast and can expect to be in contention for nominations in addition to Best Picture and Original Song.

When “French Exit” premiered at the New York Film Festival, reviews were mixed across the board. But the one element that garnered a consensus agreement was Michelle Pfeiffer’s performance, which is already being hailed as a career-best. Given the international flair and odd competition of the season, this zany comedy seems like Globe catnip. Regardless of whether it overperforms, Pfeiffer’s work is all but certain to be recognized. Perhaps she’ll even contend for her first win since 1990.

The West End musical “Everybody’s Talking About Jamie” took the world by storm a few years ago when international audiences discovered it through National Theatre Live. Just like “The Prom,” here is another musical that is striking the iron while it is still hot. Newcomer Max Harwood stars as a teenage boy with aspirations of becoming a drag queen. He learns under the guidance of Richard E. Grant’s Loco Chanelle. It’s a fun and inspiring musical for tough times that will find a loving audience upon its release.

As I write this piece, “Borat Subsequent Moviefilm” is sweeping the nation as Sacha Baron Cohen’s memorable, and Golden-Globe winning, social prankster returns for a second round of daring antics. While the original shock may not be the same as it was 14 years ago, Cohen’s provocative comment on the state of America is no less vital. The Globes are no strangers to circling back to beloved characters as Renée Zellweger, for example, was nominated twice for playing Bridget Jones. Regardless of whether Best Picture is in the cards, the genius behind the character himself seems set for a return to the party.

​“Happiest Season” was originally set for a Thanksgiving theatrical release. Luckily, we will still be able to see it thanks to Hulu, which will be keeping the same release window. Clea DuVall directs this queer Christmas rom-com starring Kristen Stewart and Mackenzie Davis as girlfriends trying to navigate their conservative family around the holiday season. With a supporting cast featuring Dan Levy, Mary Steenburgen and the ever-reliable Victor Garber, “Happiest Season” looks to be the sort of cheerful yet thoughtful comedy the Globes tend to favor.

We recently received a trailer for “Wild Mountain Thyme” from Oscar-winning screenwriter and director John Patrick Shanley (“Moonstruck” and “Doubt”). Although the film looks small and has received criticism for its Irish stereotypes (Christopher Walken’s accent is….something), we must not count this one out. Star Emily Blunt has been nominated for 5 Golden Globe awards, winning one for Best Supporting Actress Series, Miniseries or Motion Picture Made for Television for “Gideon’s Daughter” back in 2007. If anything, this delightful film might follow the same trajectory as “Salmon Fishing in the Yemen” which managed to get three Golden Globe nominations including one for Emily Blunt, her co-star (which could bode well for Jamie Dornan and Best Picture – Comedy or Musical.

There are also the rowdy comedies with hearts of gold. Both “The King Of Staten Island” and “Palm Springs” opened up to solid reviews and lots of mainstream attention. The former, saw SNL star Pete Davidson teaming up with comedy producing legend Judd Apatow. The later, was a surprise Lonely Island hit at Sundance and debuted on Hulu earlier this summer to some of the best reviews of Andy Samberg’s career. Both of the funnymen’s female co-stars, Marisa Tomei and Cristin Milioti respectively, should not be counted out for consideration either.

We round out top-tier contenders with two titles distributed by Focus Features that came out earlier this year. “Emma.” made its theatrical debut just as the pandemic was growing in the United States. While it’s time on the big screen may have been cut short, Autumn de Wilde’s take on the Jane Austen classic received positive notices for its biting edge and Anya Taylor-Joy’s performance as the titular matchmaker. Similarly, “The High Note” can find itself in the mix for Tracee Ellis-Ross’s performance as the musical diva, not unlike her Golden Globe-winning mother, Diana Ross.

I love previewing the Comedy/Musical races as they allow us to revisit titles that may not come across as obvious Oscar contenders. Yet, the more attention we focus on them here, the likelier it is that they find an audience and award recognition of some sort. Who are you predicting in these races? Let us know in the comments section below or on our Twitter account.