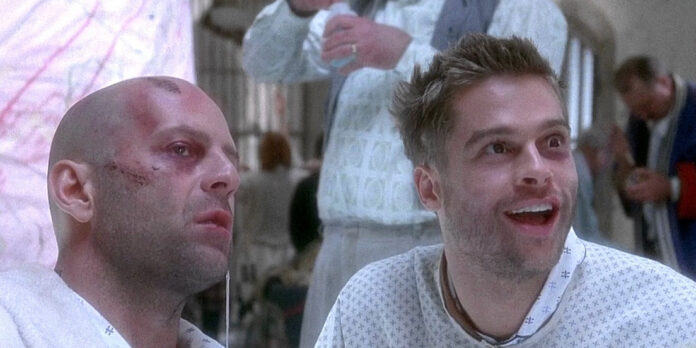 ​THE STORY – Traveling back in time isn’t simple, as James Cole (Bruce Willis) learns the hard way. Imprisoned in the 2030s, James is recruited for a mission that will send him back to the 1990s. Once there, he’s supposed to gather information about a nascent plague that’s about to exterminate the vast majority of the world’s population. But, aside from the manic Jeffrey (Brad Pitt), he gets little in the way of cooperation, not least from medical gatekeepers like Dr. Kathryn Railly (Madeleine Stowe).​
​
THE CAST – Bruce Willis, Madeleine Stowe, Brad Pitt & Christopher Plummer

​It’s hard to believe that “La Jetée,” a French short film shot in 1962, would go on to be the inspiration for a big blockbuster released during the Christmas holidays. Released on December 29, 1995, “12 Monkeys” remains Terry Gilliam’s most profitable and accessible film to date – it also remains very relevant especially considering the current COVID-19 outbreak. Despite this being Gilliam’s most mainstream film, it still contains all the familiar trademarks of a typical Gilliam picture: the surreal, complex narrative; a main protagonist that’s mentally unstable; and the use of high, low and Dutch camera angles.

However, Gilliam wasn’t originally attached to the picture and didn’t pen the script like he usually does with his films. He was selected by producer Charles Roven who saw this film as a perfect fit for Gillam’s distinctive style. In terms of the film’s inception, the story begins with executive producer Robert Kosberg who purchased the rights to “La Jetée” and hired David and Janet Peoples to write the screenplay. Rather than make a straightforward ‘remake’ of “La Jetée,” the writers used the outline as a springboard to create an intelligent film that benefits from multiple viewings and still stands the test of time.

The film opens with green text. We are informed that a deadly virus released in 1997 would see five billion people die. In 2035, the surviving population now lives underground; the air above them is considered too toxic. The deadly virus was released by a group calling themselves the “Army of the Twelve Monkeys”. Their placards are still visible on the surface proclaiming: “We did it”. A prisoner named James Cole (Bruce Willis) is selected to travel back in time as his mind seems strong enough to survive the journey. The survivors know that they can’t change the past, but if they can find the virus in its true form, then they can make a cure for those living in 2035. Cole believes he’s being sent back to the year 1996, but he actually arrives in Baltimore in 1990. He’s arrested, then is sent to a mental hospital on the diagnosis of Dr. Kathryn Railly (Madeleine Stowe). In the institution, Cole encounters Jeffrey Goines (Brad Pitt), a mental patient with fanatical environmentalist and anti-corporatist views. Goines happens to be the son of Dr. Leland Goines (Christopher Plummer), who creates viruses. (“My dad is God,” Goines exclaims.) Cole decides to trust Goines to help him escape. It doesn’t go exactly to plan. However, is Cole really from the future or is he suffering from delusions?

“12 Monkeys” is a visual delight. Like Gilliam’s “Brazil,” the future presented to us is this cyberpunk dystopia full of machinery. Special mention must be given to the film’s production design by Jeffrey Beecroft, art design by William Ladd Skinner, and costume design by Julie Weiss, which helps to create this world rich in detail. The film’s cinematography by Roger Pratt helps to set the film apart from other sci-fi films of the time. The Dutch angles and extreme close-ups really work here to make the viewer feel just as disorientated as Cole.

The film’s score by Paul Buckmaster helps to reinforce the surreal and quirky atmosphere. The use of accordion acts as a tribute to the film’s roots in French cinema, but Buckmaster also pays homage to Bernard Herrmann’s score for Hitchcock’s “Vertigo” when Cole and Railly hide in a cinema that happens to be playing the film. Each part of the mise-en-scène is effectively harnessed to create the visual look of “12 Monkeys” so the viewer becomes fully immersed in the world.

There are slight issues to be had with “12 Monkeys” in terms of its plot. The film benefits from multiple viewings as the different time threads make the viewing very difficult to follow. Certain plot points don’t exactly make sense, but then again, it’s a film that involves time travel (things always get complicated when time travel happens to be integral to the plot). The main issue lies with the romance between Cole and Railly as it seems rather rushed and slightly underdeveloped. The film lags towards the midway point as well, and the film’s runtime of over two hours begins to drag.

However, “12 Monkeys” does feature great performances from its three central players. Willis presents us with an unlikely hero who’s the strong silent type with a vulnerable, damaged psyche under that “tough guy” exterior. Stowe manages to bring depth and intelligence to her character who could have simply been reduced to the “romantic interest”. The real standout is Pitt who won a Golden Globe for his performance. He spent weeks at Temple University’s hospital, visiting and studying the psychiatric ward to prepare for his role. Pitt brings some real kinetic energy, and the film builds up in momentum whenever he’s on-screen. Twenty-five years on, “12 Monkeys” remains as entertaining and thought-provoking as ever.