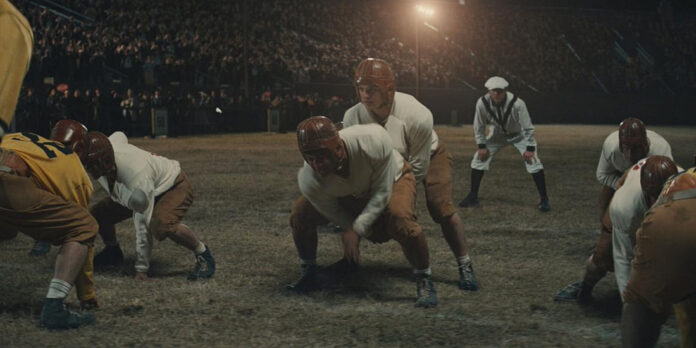 THE STORY – During the Great Depression, Rusty Russell gives up a privileged position to coach football at an orphanage in Fort Worth, Texas. Whipping his young players into shape, they soon become an inspiration to their city, state and an entire nation.

​​Sports movies have been with us almost since the birth of cinema. Underdog films, in particular, have proven to be catnip for audiences, giving moviegoers a welcomed excuse to cheer mightily for their unexpected heroes as they triumph over adversity to become champions (or at least come tantalizingly close). Indeed, the only thing you’d need to make an underdog movie a complete blubberfest would be a bunch of parentless kids.

Inspired by a true story, the film is set in Dust Bowl Texas in the late 1930s and focuses on Rusty Russell (Luke Wilson), a celebrated high school coach who unexpectedly takes a job assembling a football team at Masonic Home for Orphans, which has never before fielded one. (Rusty is also an orphan.) As Rusty takes a dozen scruffy (but incredibly photogenic) young men and tries against raised local eyebrows, the task is daunting to shape them into a winning team.

Football? Orphans? Why this movie could practically write itself! And if it did, it would probably do a better job than this one’s trio of screenwriters (Roberts, Lane Garrison & Kevin Meyer), who deliver a thoroughly predictable by-the-numbers script that tries so hard to be inspirational that the entire enterprise becomes counterproductive. There won’t be a wet eye in the house.

All the beats you would expect from a football movie are here — the hot-headed kid who resists teamwork, the powers that be that don’t like the coach’s newfangled ideas, the injury that might spell doom for the team. Check, check…and check. There are a few unexpected left turns — the stadium announcer, for example, who ridicules the team while calling the play-by-play, plus (shades of “Annie”) a surprise cameo from President Franklin D. Roosevelt (Larry Pine) himself!

“12 Mighty Orphans” is not without its strengths, though, thanks to its (mostly) rock-solid cast. Wilson delivers a strong performance as Rusty, whose modest demeanor masks a fierce drive. As his wife Juanita, Vinessa Shaw is reliably good before being sidelined from the film’s main story. And to Roberts’ credit, he has cast a deep bench of great character actors, with the first and foremost being Martin Sheen. Though his role is pretty clichéd — the school’s kindly doctor who likes a wee bit of whiskey now and then — Sheen gives it his considerable all, unearthing the marvelous twinkle that he brought so memorably to “The West Wing.” Add to that, as a local newspaperman, Treat Williams, whom I haven’t seen in forever, but who still has the moves.

Most memorable of all is 90-year-old, Robert Duvall. His is really in a throwaway scene in which his Mason Hawk, a financier, and orphan, watches the game from the bleachers and dubs the team “The Mighty Mites.” But the moment when Sheen’s doctor warmly greets Duvall’s Mason in the stands, it’s like two great actors from a passing generation paying due respect to one another. It has nothing to do with the story, and yet, it’s the best moment in the film.