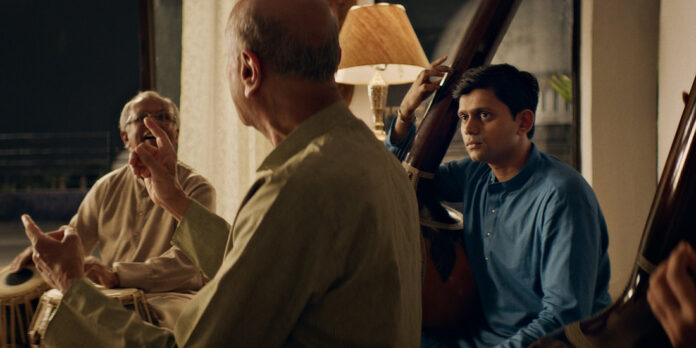 THE STORY – A vocalist who has devoted his life to the study of classical Indian music begins to question whether he will ever achieve his aspirations of excellence.

​​​Movies love a dreamer, particularly those who have the talent, drive, and that little bit of luck to help them make their dreams come true. Chaitanya Tamhane’s “The Disciple,” which won the Best Screenplay Award at last year’s Venice Film Festival and is now streaming on Netflix, is set in the same world of dreamers. Still, Tamhane has taken a decidedly different path.

A young man, Sharad (Aditya Modak), has devoted his waking hours to mastering the art of performing Hindustani music, a Northern Indian style of classical music that combines the sounds of the sitar with an improvisational singing style that proves challenging to untrained Western ears (like mine) but has a deep spiritual connection for devotees. By day, Sharad studies diligently with his guru (veteran singer Arun Dravid), and by night he pedals around Mumbai listening to tapes recorded by his guru’s mentor, Hindustani legend Maai (voiced by filmmaker Sumitra Bhave), who offers guidance on reaching the higher spiritual realms that Hindustani music can provide.

Sharad has the drive all right, but he hasn’t had that little bit of luck yet. More importantly, despite his hard work, he lacks the sheer talent needed to rise to the top of his chosen field and achieve that level of spiritual bliss that he’s so desperately seeking. To be sure, Sharad isn’t without some talent, but his mediocrity gets him bounced early from talent shows, and even his guru sees fit to criticize him onstage during a performance.

Years pass, and despite his continued practice, he finds himself no closer to success. He takes a job as a music teacher, fitting in performance gigs whenever he can, and must painfully watch as a fellow Hindustani musician soars to great public heights on Indian TV’s version of “American Idol.” He even has to endure the views of a noted music critic, who tells Sharad to his face that his beloved guru and even the legendary Maai were considered frauds in the music world. Still, Sharad practices on.

Just like the sense of serenity that can be felt with Hindustani music, “The Discipline” creates a distinctive mood of its own. Tamhane tells his story at a leisurely pace to give him (and Modak) time to fill in the emotional background details of Sharad’s character to the point that, instead of being or becoming impatient with his unwillingness to face reality, we empathize with his determination to keep trying.

If there’s any film that “The Disciple” resembles in its approach, it’s Alfonso Cuarón’s “Roma,” with its long takes and middle-distance shots that utilize few close-ups. That shouldn’t be surprising — Temhane has been mentored by Cuarón and even worked on “Roma” himself. In return, Cuarón advised the director here and is credited as executive producer on “The Disciple,” which is all to the film’s benefit.

For those expecting or looking for a crowd-pleasing triumph for its main character, “The Disciple” is not that film. Instead, Tamhane is much more interested in exploring just how people act when their lifelong dreams don’t come true. But in his skilled hands, “The Disciple” offers a glimpse of artistic frustration that is at the same time both behaviorally perceptive and emotionally satisfying.