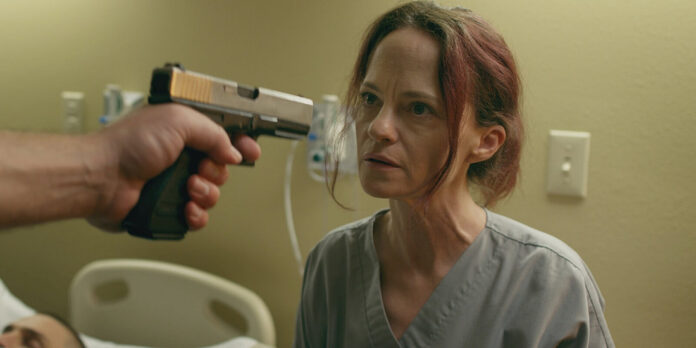 THE STORY – Bodies start to pile up when a drug-addicted nurse and her crazed cousin try to find a replacement kidney for an organ trafficker.

​​This year is shaping up to finally be Brea Grant’s year. She starred in the raved about “After Midnight” earlier this year, wrote and starred in “Lucky” which premiered at Fantasia Festival in August, and after its Tribeca debut was postponed due to the COVID-19 pandemic, her newest writing/directing venture, “12 Hour Shift,” has premiered just in time for the Halloween season.

The film focuses on Mandy (Angela Bettis), a disgruntled nurse who hates her job. She smokes outside before her shift, face downturned in dissatisfaction as a coworker drawls on about her perceptions of Mandy. As she finally enters the hospital, we soon discover our main character is harvesting her patients’ organs and selling them to various buyers. One of these buyers happens to be Mandy’s cousin Regina (Chloe Farnworth), a middleman transporting a kidney from Mandy to a mob boss-type, Nicholas (Mick Foley). Regina soon loses the kidney she was given, and she desperately tries to find a replacement while foiling Mandy’s side gig. What follows is an introduction of wild characters that inhabit the hospital, a race against time, and a story that, unfortunately, runs itself dry.

As the film progresses, it feels like the odds are never in Mandy’s favor. She snorts pills to cope with the stress of working, and her only solid relationship is with her co-worker and partner in crime, Karen (Nikea Gamby-Turner). A few hours into the shift, a violent prisoner (David Arquette) gets admitted to the hospital, a gang is after her cousin because of the missing kidney, and suddenly, Mandy’s brother is admitted after overdosing. These all seem like indicators for a wild ride of a film, but the ties never bind together. What could have been a whipped smart script slowly descends into a shlock filled puddle, as bodies continue to pile up in the hospital. As each death (and each pain in Mandy’s side) happens, you can’t help but sigh and wish the gimmick was over.

The saving grace of the film is Angela Bettis’ performance as Mandy. She plays her with a particularly dry wit that makes you root for her, even though she’s proved time and time again she is not a good person. As the foundations of Mandy’s side gig start to crumble, so do the professional masks she puts on before work. She becomes snappy, and after running around all night, starts to come down from her high. Bettis adds life to a character that’s not fully fleshed out, but her natural charisma allows for the viewer to connect with the character in a way they wouldn’t be able to if Bettis wasn’t playing this role.

With “12 Hour Shift,” Brea Grant has crafted an addition to the “dirtbag cinema” canon. The film is grimy, each character fights dirty, and it has an anti-hero at its center. The colors are muted unless blood is spilled and the camera shakes enticingly at times. It’s immersive, yes, but these aspects cannot save the film from the cringy performances (minus Bettis) or the nonsensical plot. In the end, “12 Hour Shift” would work better as a 30-minute short film – it stretches itself too thin.