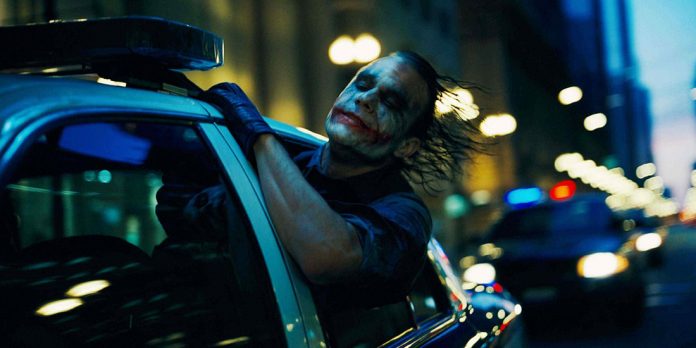 I can imagine that, for many of us, the release of “The Dark Knight” 10 years ago, was one momentous occasion. Even if the usual comic book fare is not your particular speed, the release of Christopher Nolan’s sequel to his rebooted Batman franchise was already at a fever pitch within the popular culture. No doubt anticipation intensified after Heath Ledger’s sudden and tragic passing earlier that year. Eagerness to see his last completed film, as well as a bit of morbid curiosity, only helped to build up expectations even more. When the film was finally released, it was met with huge critical praise and record-breaking box office numbers. It really felt as if something different was in the air that was being ushered in by this dark avenger.

As we have now crossed the milestone of the ten-year anniversary, looking back on the legacy of “The Dark Knight” is one of endless fascination. The film’s insertion into the culture fundamentally changed the dialogue when it came to discussing the artistry of comic book movies. Building off of the tone he set in “Batman Begins,” Nolan took the more grounded, realistic approach to the world of Gotham City even further, fusing the more fantastical elements with a darkly, more disturbing look into our own political atmosphere. It was something audiences had never seen rendered before, and it took the world by storm.​ Surely, the Academy would take notice of such a monumental achievement from that year?

In the wake of its release a decade ago, many parts of the industry have been affected by its presence. These are aspects ranging from the establishment of Christopher Nolan as one of the most high-profile studio filmmakers working today (Complete with a fanbase whose obsessive loyalty also comes with a noticeable level of toxicity) to the “dark and gritty” tone that Warner Bros. chose to establish as its brand of comic book adaptations, which would later be much derided to the point of parody. However, there is no denial of its fundamental disruption of the Oscar race.

To start, one has to look back at its initial awards season run. It always felt as if the entire campaign first centered around rewarding Heath Ledger. Just putting the exceptional performance to the side, having the opportunity to reward such a talented young performer who was taken from this world far too soon was something that was championed quite early. As the season progressed, it seemed to be the lynchpin to the film’s campaign, and it was used to great success. Ledger’s performance had swept nearly all of the season’s Best Supporting Actor precursors, but when the film landed top industry nominations from the Producer’s Guild, Director’s Guild and Writer’s Guild, it seemed like a guarantee that when the Oscar nominations would be announced, the film would land in many above the line categories.

However, no such luck came for “The Dark Knight.” Even though the film received a hefty prize of eight Oscar nominations, including one for Ledger, it was nowhere to be found in the Best Picture category, though personally, Nolan’s exclusion from the Best Director lineup stings even more. Internet outcry was pervasive, railing against an Academy that brandished elitism in choosing prestige over celebrated genre fare, a category that had been consistently ignored by the Academy. It felt like another indignity in not recognizing audience taste over their own insular group. By the time the Oscar ceremony ended, the film walked away with prizes for Ledger in Supporting Actor as well as a somewhat surprising upset in Best Sound Editing. But the sting of its omission from more of the top categories was still felt.

Then, the following summer, the Academy made a surprising announcement that forever changed the nature of its establishment. In an effort to try and invite a more diverse lineup of films into the conversation, AMPAS made the decision to expand their Best Picture selections from five to ten, a practice that had been retired for over sixty years at that point. And while then-president of the Academy Sid Ganis never mentioned “The Dark Knight” once by name at that press conference, it seemed quite obvious that this was an attempt to invite more audience-friendly blockbusters into Oscar consideration, thus bringing in more people to watch the ceremony itself.

One could argue the effectiveness of the expanded Best Picture lineup since it was instituted, particularly as it relates to more mainstream films getting nominated. The selections still are generally regulated to critically praised indie films whose box office dent is minimal. This has only seemed to become more prevalent when the Academy implemented a “sliding scale” where the number of Best Picture nominees could range from five to ten. Yes, high-brow genre films such as “Mad Max: Fury Road,” “Get Out” and Christopher Nolan’s own films “Inception” and “Dunkirk” (Albeit, more Academy friendly type work) have managed Best Picture nominations since the Academy’s change which started with the 2009 awards season. However, mainstream blockbusters are still finding themselves on the outside looking in when it comes to consideration in the major Oscar categories, and while the recent “Black Panther” release may indicate a change, that still remains to be seen.

It is odd that, despite “The Dark Knight” being responsible for implementing one of the most seismic changes to Academy procedure, it appears that kind of film would struggle even today to make an altered Best Picture lineup itself helped create. Even one of the film’s most assured wins of the night, Heath Ledger, was greatly enhanced with knowledge of the star’s passing. One of the most discussed hypotheticals amongst groups of dedicated Oscar lovers is whether or not Ledger would have truly triumphed throughout the season if his death had not been on the minds of people watching his performance. I cynically am inclined to say no. But it is an answer we will never know.

“The Dark Knight” is responsible for so many changes within the film industry, but at the end of the day, one of the most important things it resulted in was an outstanding cinematic achievement. I can still vividly remember being in a packed IMAX theater in Chicago, and the minute the entire framed opened up on my beloved city, I was completely in awe. The film still holds a personal record for most times I saw a film in theaters (Eight, by the way). It is my favorite film of 2008. Even though I sat through much of that Oscar season dreaming and hoping for awards success to find its way to the film, I was still content with having seen such a magnificent piece of filmmaking on display. Its overall Oscar haul may have been minimal, but the legacy and influence of “The Dark Knight” has continued throughout the entire decade since its release, and I have a feeling that will be felt for many decades to come.

​Do you think “The Dark Knight” deserved more recognition from the Academy? Do you think it would be nominated today? What re your thoughts on the expanded Best Picture lineup policy in the wake of its success and eventual Oscar snub for Best Picture? Let us know in the comments section below.