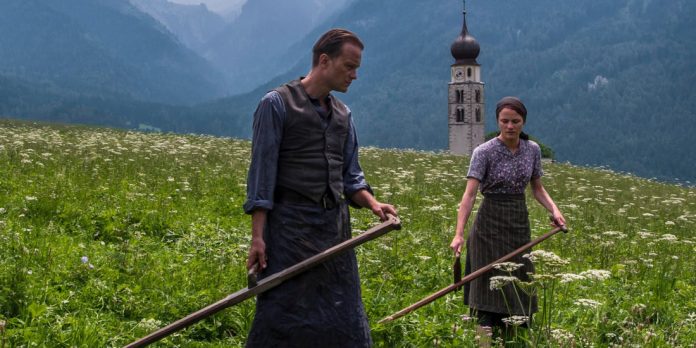 Three-Time Oscar Nominated Director Terrence Malick’s (“The Thin Red Line” & “The Tree Of Life”) new film, “Radegund” is reportedly eyeing a fall premiere date with a potential festival run. His last three films have been experimental and divisive in both their critical and audience reaction, but now returning with a new DP and a traditional script, the legendary filmmaker could find himself back in the awards season hunt yet again.

In an interview with The Independent, actor Matthias Schoenaerts discusses his “life-changing experiences” working with director Terrence Malick on his new film, “Radegund.” The film centers around Franz Jägerstätter, a real-life German conscientious objector who refuses to partake in WWII, and ultimately is executed by the Nazis for his courage.

Schoenaerts’ interview with The Guardian suggests that Malick is eyeing a Venice or Toronto premiere for the film, which is described as being more “structured” than Malick’s recent cinematic efforts. For Malick fans who were disappointed by the abstract “Knight Of Cups” and “Song To Song,” this is great news.

But adhering to a more traditional structure is not the only way Malick’s latest will differ from his other recent films. 3-Time Academy Award Winner, Emmanuel Lubezki, who shot Malick’s “Song To Song,” “Knight Of Cups,” “To The Wonder,” “The Tree Of Life,” and “The New World” is not DP’ing this project. Instead, German cinematographer, Jörg Widmer will step behind the camera.

Widmer previously served as a camera operator on a number of Malick films, including “The Tree Of Life,” and provided Steadicam support and 2nd unit camera work for films ranging from “The White Ribbon” to “V For Vendetta” to “Atomic Blonde.”

In addition, he has served as Director of Photography for a more than 40 German Productions, including Netflix’s Acclaimed TV series “Dark,” and Wim Wender’s Oscar Nominated documentaries, “Buena Vista Social Club” and “Pina.” He also has DP’d a number of commercials which you can view here.

He’s an experienced hand who has worked with Malick time and time again, and no doubt understands both his and Lubezki’s style. At the same time, he could bring his documentary chops into the fray to further expand Malick’s style. If Malick is looking to shake up his technique after some commercially disappointing efforts, some fresh blood behind the camera (And of course, a coherent script) could be just what the doctor ordered.