10 Feature Documentaries You Should Have On Your Oscar Radar 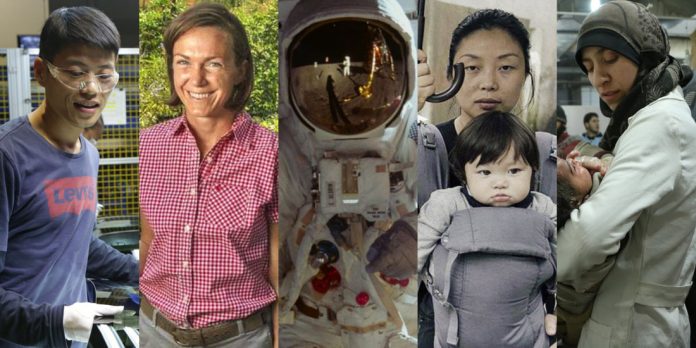 Thank God for documentaries. In a summer when few narrative features have clicked with art-house audiences (with only “The Last Black Man in San Francisco” and “The Farewell” really breaking through), it was a steady stream of top-notch documentaries that kept the lights on in many of the nation’s limited-release movie theaters.

In 2018, five different documentaries (“RBG,” “Free Solo,” “Three Identical Strangers,” “They Shall Not Grow Old” and “Won’t You Be My Neighbor?“) each grossed over $10 million in the U.S., an almost unheard-of achievement. Although no non-fiction film this year has reached that mark yet, the crop of 2019 documentaries have proven to be of very high quality, thus setting the table for what promises to be an extremely competitive race for this year’s Best Feature Documentary Oscar. Several favorites are already playing in theaters, while many more, which have screened at film festivals, are awaiting release. Let’s take a look at 10 that we have seen already that should not be forgotten come Oscar voting time.

​“Apollo 11”
Release date: March 1
The box-office champion of 2019 documentaries (so far), “Apollo 11” has been met with rave reviews (99% favorable on Rotten Tomatoes) and impressive box-office returns ($9.03 million and counting), more than twice the gross of its nearest competitor. Although entirely made up of artfully-shot archival footage, the film is so suspenseful (even though we know it has a happy ending) that it plays like a narrative film, often a plus in this category. The downside is this particular branch’s aversion to documentaries relying on archival footage — many believe that the archival footage in 2018’s biggest-grossing doc, “Won’t You Be My Neighbor?,” cost that film a spot in the Oscar final five — might prove true once again. It’s ironic that this category’s most popular documentary might be its most vulnerable for a nomination.

“The Biggest Little Farm”
Release date: May 10
This doc, directed by John Chester, one of the subjects of the movie, shares with “Apollo 11” great reviews and strong box-office, and its all-original footage approach is much more in this Academy branch’s wheelhouse. It’s a classic underdog story of a Santa Monica couple (John and Molly Chester) who are kicked out of their apartment and decide to try to realize their dream of becoming owners of a farm that can grow a number of diverse crops. They buy a 200-acre farm in Ventura County, but they soon find that their soil is depleted of nutrients, so they really have to start from scratch to bring their biggest little farm back to life. It’s both fun and compelling at the same time that may be a winning combination with the Academy.

“Echo in the Canyon”
Release date: May 24
Music docs generally don’t do well in this category unless they have an extra hook (“Searching for Sugar Man,” “20 Feet From Stardom”). “Echo in the Canyon” appears to have that hook — a snapshot of Laurel Canyon, an L.A. neighborhood where a large group of influential musicians lived in the late 1960s.The subject is particularly relevant to film fans today thanks to the locale’s inclusion in the current Elton John biopic “Rocketman.” Yes, there is a lot of archival footage here, but there’s just enough new material from surviving musicians who lived there at the time that will likely get the film by the branch’s anti-archival inclinations.

“Pavarotti”
Release date: June 7
Yes, another music doc, I know, but this one’s directed by four-time Oscar nominee (and two-time winner) Ron Howard, so attention must be paid. Opera purists may turn up their noses at the film’s emphasis on Pavarotti The Celebrity rather than Pavarotti The Artist, but audiences (who have turned out to earn the film an almost $4 million gross so far) don’t seem to mind. The documentary branch doesn’t usually jump at musicians’ biographies (2015’s “Amy” was probably the last one to hit it big), but “Pavarotti” may have a pedigree that’s simply too tempting to resist.

“The Edge of Democracy”
Release date: June 19
For an Academy branch that tends to nominate docs about starving Bosnian children over showbiz documentaries, the Netflix film “The Edge of Democracy” might be right up their alley. Here we look at politics in Brazil with President Luiz Inácio Lula da Silva, as he leaves office with an astronomical 87% favorable rating, only to be convicted to a 12-year prison term for corruption. His hand-picked successor, Dilma Rousseff, started off well enough until she was impeached for manipulating the budget to hide economic problems. In short, Brazil’s democracy is a mess, and if the viewer can detach oneself from the impact this has on the people of Brazil, it’s a fascinating look at the right form of government gone very wrong.

​”Maiden”
Release date: June 28
This is a beaut of a doc that is just beginning what looks to be a very successful run in theaters.  Do you have any interest in competitive sailing?  I certainly don’t, but that doesn’t make the saga of Tracy Edwards, a 24 year-old cook on charter boats, any less compelling.  In 1989, sick of the sexism in competitive sailing, she organized the first-ever all female crew to compete in the prestigious Whitbread Round the World Race.  The reviews for “Maiden” have been strong, and the appeal of an underdog story about women competing in a man’s world should not be underestimated.

“One Child Nation”
Release date: August 9
A new mother herself, filmmaker Nanfu Wang looks back at the One Child Policy of China, which extended from 1979 to 2015, which forbids any family from having more than one child in an effort to stem China’s burdensome population explosion. While there may have been good intentions behind China’s effort at population control, the enforcement procedure by the government led to paranoia and forced sterilizations that caused a panic in many Chinese families. In Wang’s hands, “One Child Nation” manages to examine a potent political issue through a very personal lens.

“American Factory”
Release date: August 21
This Netflix film won the U.S. Documentary Directing Prize at this year’s Sundance Film Festival and focuses on a culture clash between a high-tech Chinese billionaire who opens a new factory in an abandoned General Motors plant in Ohio with the thousands of blue-collar American workers whom he hires. The Chinese staff see the American workers as too lazy, and the Americans view their bosses as having unrealistically high expectations, a real snapshot of how a difference in work ethic can reflect the culture of a country. One side note: “American Factory” is co-produced by Higher Ground Productions, the production company of Barack and Michelle Obama.

“Where’s My Roy Cohn?”
Release date: September 20
With a title taken from President Trump’s notorious quote about his search for an Attorney General who would do his bidding, director Matt Tyrnauer follows up last year’s successful “Scotty and the Secret History of Hollywood” with this profile of Sen. Joseph McCarthy’s infamous layer/fixer Roy Cohn. The deeply closeted Cohn, who was seen by many as McCarthy’s attack dog during the senator’s Communist witch hunt, in later life became a close friend to a flashy young real estate mogul named Donald J. Trump. Sony Pictures Classics, which is also releasing “Maiden,” knows how to play the Oscar game, so look for “Roy Cohn” to become a high-profile contender in the coming months.

“The Cave”
Release date: October 19
Directed by Academy Award nominee Feras Fayyad (“Last Men in Aleppo”), National Geographic’s pony in this year’s Oscar race won the TIFF Audience Award for Best Documentary and has amassed quite a large amount of buzz for its harrowing and remarkable on the ground storytelling of a secret underground hospital during the Syrian war. With a compelling female protagonist at the center pushing many topical social issues forward and some brutal imagery with horrific sounds of gunfire, bombs and drone strikes ringing throughout, “The Cave” packs an emotional wallop that will be hard to dismiss this year.

These are the 10 films that are on many Oscar prognosticators’ radar, but there’s always one or two surprises that come out of nowhere to become major contenders. And now that others have screened at Telluride and TIFF, how many of these will get bumped? What are you currently predicting for Best Documentary Feature? Are there any contenders you’re considering that haven’t been released yet? Let us know in the comments section below or on our Twitter account.