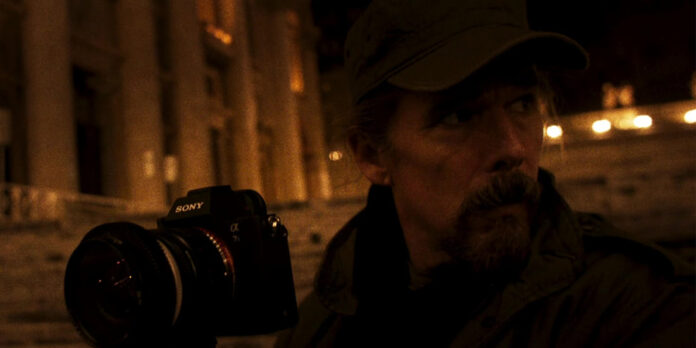 THE STORY – Called to Rome to stop an imminent terrorist bombing, a soldier desperately seeks news of his imprisoned brother — a rebel with knowledge that could thwart the attack. Navigating the capital’s darkened streets, he races to a series of ominous encounters to keep the Vatican from being blown to bits.
​
THE CAST – Ethan Hawke
​
THE TEAM – Abel Ferrara (Director/Writer)

​​​​​​​​A common complaint thrown at spy movies is that they contain plots that are “incomprehensible.” Who is doing what to whom, and why they’re doing it, is obscured for so long or only revealed to be happening at all in the final few minutes. This makes the film difficult to follow or recount the plot after the film has put everything into place. After seeing Abel Ferrara’s latest, “Zeros and Ones,” I think all other films deserve an apology. This film takes being incomprehensible to a new level, offering up so little context for its labyrinthine networks of people, places, and plots that it could have been a parody if it wasn’t so straight-faced.

Ethan Hawke plays twin brothers Justin and JJ, the latter of whom is an agent of some kind looking for the former, a radical who has some information about something that might have gotten him killed. “Zeros and Ones” starts off about as comprehensible as any other spy flick – we may not know exactly who the people that JJ talks to are, but we can discern enough to get us through. At first, it’s just the filming style that is frustrating. Everything is awash in a sickly yellow tint, and every so often, the cinematography will shift to slow-motion and a lower frame rate with no warning and little, if any, motivation. But then more characters are introduced, the timeline starts to hop around, and we watch more and more play out on screens so pixelated that what is happening is barely discernible. The effect is alienating and isolating, which is very likely the point, as Ferrara has been obsessed with these themes throughout his career. But “Zeros and Ones” (the only purpose behind the title of which seems to be a nod to the base of digital code) looks and feels so ugly that the point is made well enough in the first few minutes, after which Ferrara and cinematographer Sean Price Williams engage in nearly an hour and a half of beating the audience over the head with it. As the film goes on, the plot takes more and more of a backseat to the increasingly hallucinatory aesthetics, leaving the audience stranded in a morass of digital noise with nothing to latch on to. Again, this is almost certainly the point, to put the audience in the shoes of the protagonist, to feel as disconnected from other people and as unmoored from life as he does. Except that JJ actually has a base knowledge of what is going on, and the audience does not. With nothing to be invested in, why should the audience care?

Theoretically, Hawke’s performances should be the answer to that question. It’s not a surprise that Hawke would end up working with Ferrara, and not much of a surprise that he would be incredibly excited to take on these dual roles. In two inexplicably tacked-on video messages that bookend the film, Hawke mentions how much he loves Ferrara and how deeply the screenplay touched him. Hawke’s performances have an improvised feeling to them that could keep the film grounded in something real and tangible, but instead, they cause the film to fly off the rails. The film’s centerpiece sequence is a rambling screed of a monologue from Justin that feels like a list of bullet-pointed ideas about radicalism and religious extremism that Hawke spits out with mad conviction. It’s stunning but increasingly ridiculous as he rambles on and on, and his point becomes less and less clear. We feel Justin’s passion, but without context, it comes across as a generic manifesto that could have come from any random person at any point in the past decade. As JJ, Hawke is a compelling blank slate, completely lacking in personality or even the actor’s trademark charisma. He’s a vessel for Ferrara’s ideas, which don’t need any help given all the work the film’s style is doing to put them across.

Despite all these complaints, something is intriguing about the film’s ideas and how it visualizes them. The way Price Williams emphasizes the low-quality digital footage at every turn may be ugly and overdone. Still, the abstraction of digital images does have the sensation of looking bleary-eyed at a screen for too long, something we’ve all experienced after living through over a year of pandemic life. Unfortunately, everything about the film’s style (including the portentous, foreboding drum-and-guitar score by Joe Delia) comes across as pretentious and overbearing, especially when paired with the barely-there plot. “Zeros and Ones” is, in every way, the type of film that people who hate art films think that all art films are. It’s a chore to sit through, and the video message from Hawke that officially ends the film after the end credits (just in case you weren’t sure, Hawke closes by saying, “this is part of the film, by the way”) feels like both an apology and a desperate attempt to win the audience back after losing them over the previous incomprehensible 85 minutes. Hawke admits that he didn’t understand the screenplay when he first read it and proceeds to pontificate on the film’s themes for what feels like forever. That he felt the need to end the message by explicitly stating that it was part of the film is the final nail in the film’s coffin. This is a pretentious piece of art made by people so in love with their own obfuscation and so convinced of their own genius that they don’t care about the audience. That’s not thrilling or audacious; it’s tedious.