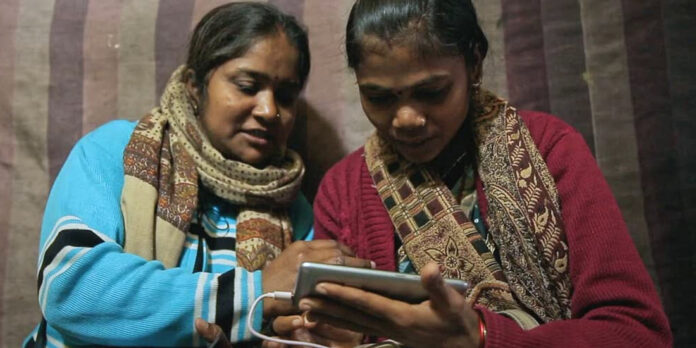 THE STORY – In a cluttered news landscape dominated by men emerges India’s only newspaper run by Dalit women. Chief reporter Meera and her journalists break traditions, redefining what it means to be powerful.

Journalism is under attack around the globe now more than ever. Even here in America, which is supposedly the freest country in the world, people in power routinely demean and degrade those journalists speaking truth to their power. The state of journalism is even worse in many other countries. In the Indian state of Uttar Pradesh, a group of women took it upon themselves to start their own newspaper. “Writing With Fire” is an inspiring chronicle of these fearless women and their fight for the truth. Captivating and riveting, this documentary never backs down, showing both the struggles and triumphs of the journalists.

Rintu Thomas and Sushmit Ghosh’s “Writing With Fire” centers primarily on Meera, the chief reporter and co-founder of Khabar Lahariya, an all-female-run newspaper, the first of its kind in Uttar Pradesh. Most who write for KL are Dalit women, considered the lowest in India’s caste system. Dalit women have been nearly invisible in this society, yet this group of reporters fights to be heard. Meera leads this grassroots team of reporters, challenging them to keep pressing into the truth of their stories, even when they hit roadblocks.

In addition to Meera, the film spends a great deal of time with Suneeta, a younger woman driven to journalism to fight corruption. “Power is very important. Being a journalist gives me the power to fight for justice, and that’s what I want to be remembered for,” Suneeta says. It’s stunning to watch Meera and Suneeta have such vision for their reporting, even down to explaining the concept of b-roll to a political candidate. Their vision is compelling compared to the other women on the team they’re teaching. They purchase smartphones for the whole team and go through training on how to film interviews and footage for their pieces. Most of these women have never used electronics and have to learn the basics.

Seeing Meera and Suneeta, along with their other colleagues, stand up tall amid direct challenges is nothing short of remarkable. In one scene, when Suneeta confronts an official with safety concerns, male reporters from more prominent outlets criticize her approach. One man “kindly” mansplains to Suneeta that she should praise the officials more so that they’ll respect her. “There’s enough praise from you all,” she responds.

In another sequence, Meera reports on a partially destroyed road. Amidst the large crowd of men gathered at the scene, one angry man confronts her, challenging her reasons for being there and accusing her of looking for bribes to report the news. The imagery is tense: one small woman quite literally surrounded by dozens of furious men. One expects the scene to break out in threats and kicking her out of the area, if not outright violence. Instead, Meera stands her ground without flinching and can eventually interview some of the others in the crowd.

These women aren’t only looked down upon by society; some of their husbands are outright abusive. One woman faces a husband who steals her salary and insults her work. “I will leave you, but not my job,” she declares. Their work speaks for itself. We see political candidates squirming when questioned by KL reporters. The film tells us that one week after reporting about a woman’s rape, the rapist was finally arrested. Real-world impact is happening because these reporters decided to stand up and use their voices.

Just as these journalists never shy away from the challenges in front of them, the filmmakers put the audience right in their shoes, letting us feel the tension the women experience every day. It’s an eye-opening and awe-inspiring film. This is the beauty and necessity of documentary filmmaking: exposing the rest of the world to specific and vital stories that we may never hear of otherwise. Seeing the fearlessness of Meera, Suneeta, and the rest of the reporters gives hope that journalism will survive as long as there are those that seek the truth to defend those less powerful.