Why “Malcolm & Marie” Should Be Rewarded 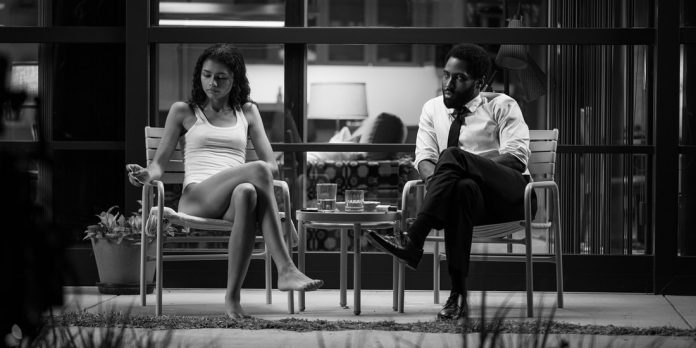 ​One of the last films of this awards year, “Malcolm & Marie,” is soon to be released on Netflix but has been screening to critics and voting members, gaining a positive-to-mixed reaction between this crowd. As of right now, “Malcolm & Marie” is my favorite film of this awards year, and I do not see any other film topping it this late into the season. While critics may be mixed on the film, this is one that many members of the Academy will support and love. There should be a strong campaign made for this film to do well during this awards season, and there are reasons why Hollywood will want to reward this film in this particular year.

​This film has many strengths and should contend in numerous categories. The most obvious of which is the acting categories, both Best Actor and Best Actress. Zendaya gives one of the best performances of the year as Marie, a complex character who lays it all bare for the audience to see. Zendaya is able to fully connect with the character, showing off a range of moments and having those big Oscar scenes that the Academy members will already fall in love with. After taking home an Emmy at the end of last year for another Levinson production, “Euphoria,” it is clear that her peers respect her and are willing to vote for her, and she deserves to be in the conversation.

While many critics and film pundits have already been discussing the possibility of Zendaya getting a spot for Best Actress, there should also be a discussion for John David Washington in Best Actor. While the Best Actor race is tougher with many men fighting for a place, Academy members are going to watch Washington in numerous films during the voting process as both “Malcolm & Marie” and “Tenet” are being campaigned this year. He nearly broke through in 2019 with “BlacKkKlansman,” so perhaps this is the year to reward the work he has done in the industry and give him that nomination slot for what is an incredible performance in “Malcolm & Marie.”

It is easy to look at the race for Best Original Screenplay and be overwhelmed by the number of films already contending in that category. However, there is a case to be made as to why “Malcolm & Marie” deserves one of those coveted spots. This is a film that is so reliant on its screenplay, purely focusing on the dynamic between a couple, only establishing other relationships and fleshing the leading characters through that tight dialogue that Levinson brings to life. There is no heavy use of visuals or music to distract the audience. There are no cuts away from this moment in Malcolm and Marie’s life. The difficulty of keeping an audience engaged with this relationship for over 100-minutes and the incredible writing of the dialogue should make this a contender for Best Original Screenplay.

​This awards season has been a weird one due to the pandemic and changing rules. With the Oscar eligibility period extending to the end of February 2021, it seems clear that there are two films that are going to benefit from this: “Judas and the Black Messiah” and “Malcolm & Marie.” Some people might be hesitant that waiting for the last minute to release, especially missing out on some critic groups, will hurt the chances of both of these films doing well. However, last year one of the biggest contenders for Best Picture, “1917,” waited until the last moment to release and it ended up performing well at numerous awards, taking home three Oscars at the end of it all.

This film has been in the public eye for a majority of the past year when it was reported that Levinson wrote the script during the pandemic after the set of “Euphoria” was forced to shut due to the pandemic. With that, he got to make sure the film could shoot during the pandemic but have all the safety measures in place. This was the first major film production to occur during the pandemic, and yet there was no drama around it. Nobody got ill, everyone was following safety procedures, and the final result ended in a strong film and staff getting a pay-check and having a job during an unstable time. If the Academy wants to make a statement and show that they support the film industry and those who are helping keep it going during these times and doing it safely, nominating “Malcolm & Marie” will undoubtedly make that message loud and clear.

Awards pundits may be looking at the mixed-to-positive scores on Metacritic and Rotten Tomatoes right now for “Malcolm & Marie” and questioning whether this a film that can actually make a statement this awards season. Firstly, this is not a film designed for critics, given Malcolm’s viewpoint and his disdain towards them. However, this is a movie that has the elements that the Academy loves: a movie about the film industry, the big monologue sequences and dramatic scenes from both Zendaya and John David Washington, and a film that was clearly made with passion and desire to keep the film industry alive during these tough times. Nothing about the awards season is certain, but I hope members of the Academy watch “Malcolm & Marie” and decide to reward it.

Have you seen “Malcolm & Marie” yet? Do you think it will do well with the Academy Awards, or no? Let us know your thoughts in the comments section below or on our Twitter account.