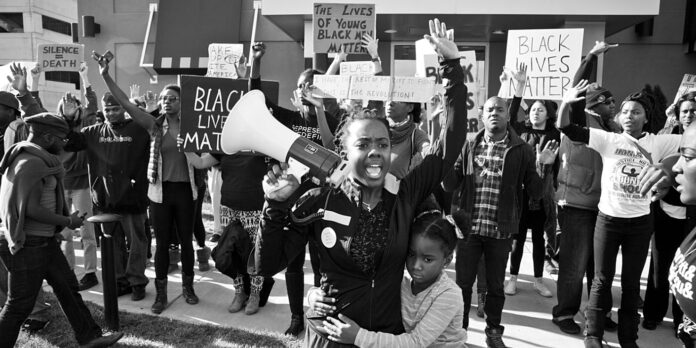 THE STORYAn account of the Ferguson uprising as told by the people who lived it. The filmmakers look at how the killing of 18-year-old Michael Brown inspired a community to fight back and sparked a global movement.

One year after “13th ” and “OJ: Made in America” cast an broad lens on the issue of police brutality in African-American communities, “Whose Streets?” provides a more specific case study. Sabaah Folayan’s new documentary focuses on the aftermath of the death of Michael Brown in August 2014 in Ferguson, Missouri. While “Whose Streets?” contextualizes the Michael Brown shooting and makes clear that it is part of a national epidemic of unarmed black men being killed by police officers, Folayan’s focus is on the particular experiences of the individuals who gathered on the streets of Ferguson to effect change.

“Whose Streets?” draws much of its power from raw archival footage of the protests in Ferguson. Folayan relies on camcorder and cell phone recordings of the confrontations between the police and activists, clashes marred by tear gas, attack dogs, and other forms of weaponized aggression. Whereas many documentaries use archival clips as a backdrop to the narration of the documentarian or the recollections of an interview subject, “Whose Streets?” gets out of the way of its video footage. The result is evidence of uncommon immediacy. The film gives no avenue of escape, no opportunity to detach oneself by latching on to the soothing sounds of a narrator. The film immerses the audience in the gunfire, the fear, and the broken promise of American justice; the haze of smoke and the desperate cries for humanity to restore itself.

These devastating scenes speak to the gulf that exists between the idea of police protection and the reality that this idea is too often neglected by law enforcement officials serving in African-American communities. “Whose Streets?” is hopeful, however, about the potential of direct activism to root out miscarriages of justice, and the documentary places its faith in the Ferguson residents who risked arrest and sacrificed their careers to fight back against the status quo. More specifically, “Whose Streets?” rests its hope in the advocacy of a young generation and in the potential of activism to be passed down from one generation to the next. Two of the film’s most moving threads involve parents awakening their young children to the challenges that they will face as black people in America and to the power and change that can come if they refuse to let society render them voiceless. When Brittany Ferrell, a 25-year old nursing student, takes her daughter to a Black Lives Matter rally, there is a familial bond and the hope that a new generation will build upon the foundation of standing up for freedom.

The strength of “Whose Streets?” is its humanization of the issues surrounding the Michael Brown tragedy. The movie’s weakness is its limited exploration of the competing visions at the heart of the Ferguson movement. No resistance movement is a monolith, and Folayan includes a few scenes that hint at the presence of dissenting tactics. In one scene, musician Tef Poe accuses the subset of protesters who rioted and looted of hindering the effort to win over the hearts and minds of skeptical white Americans. In another scene, Kayla Reed defends such behavior as a “revolutionary act” borne of desperation, an attempt to radically jolt society out of its complacent slumber. Unfortunately, “Whose Streets?” does not probe these contrasting tactical beliefs with a sufficient level of rigor. For a documentary that is essentially about the importance of social and political action, “Whose Streets?” is reluctant to dissect the consequences of different modes of protest. Nonetheless, “Whose Streets?” is a strong documentary that calls for those who are oppressed and those who view themselves as true allies of the oppressed to translate their grievances into a tangible response. Words alone, the movie argues, cannot break through the armor of the oppressors.

THE GOOD – A humanizing and specific look at a serious ongoing issue in our society today.

THE BAD – Limited focus on the competing visions within the Ferguson movement.
​
THE OSCARS – None