Which Of These Six Films Will Win best picture In 2022? 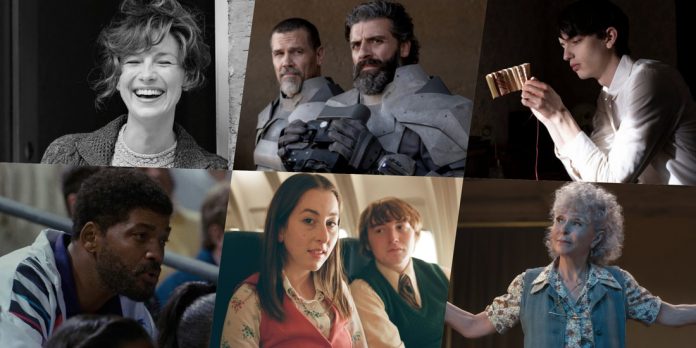 A new year has begun, and with it, the next stage of Oscar season. 2022 will bring about a new Best Picture winner in just under three months, and as of now, only six films can probably still see a path towards being that winner. Three of them have a far clearer and more plausible path, yet the other three still have pipe dreams that could bear fruit with a few breaks. At the moment, “Belfast,” “The Power of the Dog,” “West Side Story,” “Licorice Pizza,” “King Richard,” and “Dune” are the only films all but locked for Best Picture nominations. As such, they can afford to look ahead and figure out how they can win the big prize when they get there. Going into the new year, these are the most likely above-the-line combinations each film can use to take Best Picture on March 27th.

BELFAST
​Best Picture + Best Original Screenplay – or Best Picture + Best Supporting Actor + Best Original Screenplay
“Belfast” has been the Best Picture frontrunner since September 2021 after it premiered at the Telluride Film Festival to enthusiastic responses and might still be now, yet its path has become narrower. With Jane Campion stealing Kenneth Branagh’s thunder in the Best Director race, Ariana DeBose overtaking Caitriona Balfe as the Best Supporting Actress frontrunner, and “Licorice Pizza” becoming the new Best Original Screenplay favorite, “Belfast” could either have to settle for a mere Best Supporting Actor win as a consolation prize or get shut out entirely like past preseason favorites “The Irishman” and “The Trial of the Chicago 7.”

There is a way it can still win Best Picture after all, but it probably can’t be done without rallying in Best Original Screenplay. If it wins both Screenplay and Best Supporting Actor for either Ciaran Hinds or Jamie Dornan, it will probably use that combination to win Best Picture like “Moonlight” and “Green Book” did before it. But even if Best Original Screenplay is its only victory before Best Picture, that could well be enough, like it was for “Spotlight” in 2015.

Obviously, Campion was going to win at least one Oscar this season, which seemed most likely in Best Adapted Screenplay. But with Campion sweeping so far in Best Director as well, it is hard to imagine that “The Power of the Dog” won’t ride her coattails to Best Picture if she wins two Oscars on her own. And if “Belfast” can’t use a Best Original Screenplay win to make its own combinations work at the same time, “The Power of the Dog” would then have to win almost by default.

On the other hand, if Campion only splits Director and Adapted, the movie can still pull through with an acting win. Kodi Smit-McPhee is dominating the critics’ circuit in Best Supporting Actor, yet it seems unlikely he would do the same with the industry, at least until SAG weighs in. Likewise, Benedict Cumberbatch is dominating the Best Actor critics race. However, mostly everyone still thinks Will Smith will sweep the industry awards or Andrew Garfield has a better chance to upset him once we get to SAG and BAFTA for his performance in “Tick, Tick…Boom!.” However, if either Cumberbatch or Smit-McPhee pull through with the Academy, Campion might need only one Oscar to put “The Power of the Dog” over the top – and getting two would clinch it then and there.

If Campion can’t complete a season-long Best Director sweep and if there’s no room for Branagh after all, then Steven Spielberg will likely be next in line for his third Best Director trophy. Should that happen, and DeBose wins, then “West Side Story” can become the second straight Best Picture winner to win for Picture, Director, and an acting category. But even if Spielberg loses, then his musical can still win if Tony Kushner rallies over Campion in Best Adapted Screenplay instead. Stats are looking unlikely though after he missed a crucial nomination at the Golden Globes for Best Screenplay. However, should that happen, it can be the one to use the Picture/acting/Screenplay combo to victory instead of “Belfast.”

The last movie to win Best Picture with Supporting Actress as its only other above-the-line win was the last musical to win it all. But when “Chicago” did this in 2002, it needed four other wins below-the-line, so “West Side Story” would likely need a few of its own if DeBose is its only major individual winner.

It would likely need a bigger upset in Best Supporting Actor to complete its Best Picture menu. First, it needs to get Bradley Cooper in, to begin with, which is a tall order on its own, considering he has only three scenes in the movie. But if Best Supporting Actor is still wide open enough for him to get in, it could stay wide open enough for him to join Anderson as a long-overdue winner as well – and then anything is possible for the movie that finally got them there. A nomination for Alana Haim in Best Actress would also be a sign of support amongst the Academy, though, she does not need to win for the film to win Best Picture.

KING RICHARD
Best Picture + Best Actor + Best Supporting Actress + Best Song
“King Richard” looked like it would challenge “Belfast” as a populist, voter-friendly Best Picture frontrunner until “West Side Story” emerged as the true industry-friendly alternate. As such, it seems “King Richard” will just focus on keeping enough momentum to stay as a Best Picture nominee and to keep Smith on track to win Best Actor when the industry starts voting. In addition, it can also keep Beyonce on track to win a star-studded Best Original Song category for her closing credits song, “Be Alive.”

If those two wins still happen, they might not be enough to surge back in Best Picture. Yet it could be a far different story if Aunjanue Ellis surges back in Best Supporting Actress. Although DeBose looks like the favorite now, if she slips up and if “Belfast” doesn’t stay strong enough to get Balfe back on top, Ellis could well become “King Richard’s” second acting winner. And if it has that and a Best Original Song win on its resume, it would have as good a case as anyone for a Best Picture victory.

DUNE
Best Picture + Best Director + several below-the-line wins
Before “Spider-Man: No Way Home” had Best Picture buzz forced upon it, “Dune” looked poised as the one single solitary box office hit amongst the ten nominated Best Picture field. For a time, it looked like it could ride that buzz for much more, but it currently looks like it will have to settle for sweeping the technical awards.

However, if Denis Villeneuve gets an Oscar for bringing all those technical elements together, it might be another story altogether. If Campion, Spielberg, and Branagh all cancel each other out and voters don’t want to wait until “Dune – Part Two” to honor Villeneuve’s accomplishments, then an upset could be on the way. Should Villeneuve do what George Miller couldn’t in “Mad Max: Fury Road” and add Best Director to several below-the-line wins, then maybe “Dune” can do what “Mad Max: Fury Road” couldn’t do either and win Best Picture too. Nonetheless, a lot more of the right combinations and lucky breaks would have to happen first. But that can be said of almost every other Best Picture frontrunner still left in the race.

What do you think is winning Best Picture? What is the path for that film to win? Check out the NBP team’s current Oscar predictions here and let us know your thoughts in the comments section below or on our Twitter account.