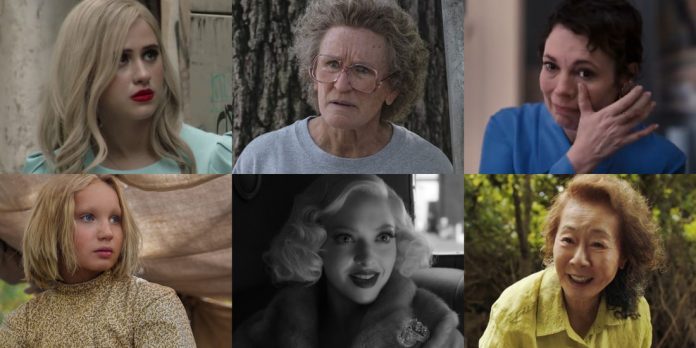 Welcome to awards season 2021. Now that the Golden Globe Awards and the Screen Actors Guild Awards have announced their official nominees, we have a real sense of how the legitimate Oscar race will play out based on hard evidence of precursors, rather than assumptions and critics associations. Since we have received SAG nominations in particular, in concert with the expanded acting categories at the Golden Globes, it is my contention that we have a clear insight into how each category will break down at the Academy Awards. This is part two of a series of posts analyzing the acting races’ state with the newly announced SAG and Golden Globe nominees (check out my other piece on Best Actress here).

Next up is Best Supporting Actress. This is the most complicated race to discuss because I can feel the hearts breaking (or becoming enraged) as you read my piece.

Here is where I see the category standing right now…

This is déjà vu, all over again. Glenn Close v. Olivia Colman. The last time these two actresses went head-to-head, Colman sneaked up behind all of us by discreetly winning the Golden Globe and BAFTA, and winning over the hearts of Academy voters in her portrayal of Queen Anne in “The Favourite” and bested the Oscar-less Hollywood icon hat is Glenn Close. And now, two years later, the same women are the two frontrunners for Best Supporting Actress, and really, they are the only two who can win. And yet, Olivia Colman, despite being phenomenal in “The Father” – really the emotional potency she conveys in this performance is truly something spectacular – will not win again, for she just won in a huge upset two years ago. This means, after seven unsuccessful nominations, Glenn Close will likely become an Oscar winner.

Close gives a transformative performance in “Hillbilly Elegy,” with an enormous amount of makeup and overt characterization that plays right into the hands of Oscar voters. Although this is probably not the role most people would have wanted her to win for, it’s the one they are going to get. The fact that Close was able to manage nominations both with SAG and Golden Globe – and was joined by her co-star Amy Adams for Best Actress at SAG – shows that this performance has the strength to rise above the controversy surrounding the film’s social commentary and politics. Strangely, Close could pull an Allison Janney for “I, Tonya” type of a win: a longtime veteran wins Best Supporting Actress for a controversial portrayal, and her film additionally received gets a Best Actress nomination and a below-the-line nomination (“Hillbilly Elegy” will likely receive and maybe win Best Makeup/Hairstyling).

Here’s where things begin to get complicated. Helena Zengel has really come out of nowhere over the past few days for her recognition for “News of the World.” Before her Golden Globe and SAG nominations, she was hardly on the radar in a big way. And yet, the reality is, she is now in a strong position since “News of the World” is likely going to be a Best Picture nominee, filling the traditional “dad movie” spot in the lineup. She is not locked for an Oscar nomination, but she is sitting comfortably.

Amanda Seyfried has accrued a strong base of supporters online for her old-fashioned, charming performance in “Mank.” These fans have been so passionate about pushing her as an alternative to Glenn Close for the win. And before the SAG nominations this morning, I would have said she is the only possible person who can beat Close. “Mank” is a Best Picture frontrunner and Gary Oldman has a strong position in the Best Actor race for the same film. Seyfried expectedly received the Golden Globe nomination. However, she was omitted from the SAG lineup. This is truly a shocking development and essentially nullifies a narrative for her to win the Oscar. (Oldman was nominated for “Mank,” so there is really no reason she should have missed today.) That being said, SAG and Oscar lineups never align 100% and this is one of the areas in which it is so obvious that there will be at least one SAG-nominated actress who is sacrificed at the Oscars. I really do believe Seyfried is in a good position to retain the Oscar nomination, as long as she hits the other precursors.

Youn Yuh-jung in “Minari” and Maria Bakalova in “Borat Subsequent Moviefilm” have dominated the critics’ groups for the Best Supporting Actress wins. Many, like myself, wondered how that would translate to the Oscar lineup. SAG answered that question today by nominating both of them. Youn Yuh-jung fits the mold of the type of character and performance we typically see nominated by the Academy. Combined by that with the overwhelming success of “Minari” at SAG with a Cast Ensemble nomination and a Best Actor mention for Steven Yeun, makes believe “Minari” has passed a certain industry test as a whole, in a way that even “The Farewell” did not last year, and will find Oscar success. Youn Yuh-jung will be one of the places where the “Minari” love will materialize into Oscar traction, along with Best Picture and Best Original Screenplay.

Maria Bakalova, who many fans of hers have considered to be the Melissa McCarthy in “Bridesmaids” of the year, is a different story. Her ballsy, gross-out performance has rocked the critics’ groups this season. She has a passionate group of fans online who want her to be in it to win it. However, many, like myself, remain hesitant that her character is one the Academy will embrace. The fact that she received the SAG nomination goes a long way for her campaign. And her probable Golden Globe win in Best Actress Comedy/Musical will give her an enormous amount of good press. Note: she is not competing in Best Supporting Actress at the Golden Globes, which could complicate her campaign/momentum to an extent.

However, I am still not convinced. Nominations like McCarthy in “Bridesmaids” come along once in a lifetime, and “Bridesmaids” was a contender for Best Picture and actually received a nomination for Best Original Screenplay nomination. “Borat Subsequent Moviefilm” is in neither camp. Additionally, Bakalova will surely receive a Critics Choice nomination for Best Supporting Actress. That’s guaranteed. However, I believe she will fail to win over BAFTA voters, and her snub there will be the sign of something greater. The original “Borat” did not receive a BAFTA nomination, despite receiving an Oscar nomination for Best Adapted Screenplay. It is an inherently American phenomenon. And the type and presentation of the humor is simply not the brand of BAFTA voters (and I would argue Academy voters).

Rather than McCarthy, perhaps a better comparison for Bakalova is Jennifer Lopez in “Hustlers” last year. Lopez was nominated by Critics Choice, Golden Globes, and SAG, like Bakalova, will have after Monday. She had a borderline leading performance, like Bakalova. And Lopez’s performance and character were a favorite of Film Twitter and critics groups, like Bakalova. And Lopez was eventually squeezed out of the race, for many deemed “‘Hustlers‘ is not an Academy movie.” The performance may be deemed to have merit, like Lopez, but sometimes that is not enough. Sometimes characters who are not Academy material cannot overcome the biases of the voters. If Zengel had not performed so well with Golden Globes and SAG, I would be less sure of this argument. But, here we stand. (I was a huge supporter of Lopez last year, so this is more of a cautionary tale and warning to fans who are fully invested in a Bakalova nomination. Sometimes the stars look more aligned than what they are in reality.)

A huge piece of information we gleaned this week was the fact that Ellen Burstyn is not as competitive as everyone once thought for “Pieces of a Woman.” The Oscar-winning titan of the industry was snubbed by both Golden Globes and SAG. This is a downright stunning development, considering the character has the gravitas with an emotional, fireworks monologue. Even if Burstyn receives Critics Choice and even BAFTA, I would argue this is almost impossible to come back from, unless the “Pieces of a Woman” buzz is renewed somehow. Many have used a comparison of Laura Dern in “Wild” to justify continuing to predict Burstyn. I understand that to an extent, but someone with as high of a profile as Ellen Burstyn should not have been ignored by both organizations, while her much less famous (in America) co-star managed nominations with both groups.

Additionally, here are a few other actresses whose campaigns have shifted this week:

For the time being, my formal prediction is going to be the following:

For now, I’m going to believe the Bakalova Oscar nomination when I see it. Realizing the parallels between Bakalova and Lopez put the race into perspective for me. If Zengel falls and Burstyn does not come back, then maybe Bakalova can achieve what Lopez failed to do last year. (Who are we kidding, Lopez did not fail the Academy; the Academy failed Lopez.) If “Minari” proved to be a SAG-only type of deal, we could see Burstyn come back or some other dynamic shift. However, if Youn Yuh-jung manages to be nominated by BAFTA, she will have put herself into a rare position in the new age of award seasons of leaping from critics darlings to real-deal Oscar contenders, unlike say Ethan Hawke for “First Reformed” or Lupita Nyong’o for “Us.”