What Will Be “CODA’s” Lasting Legacy After Its best picture Win? 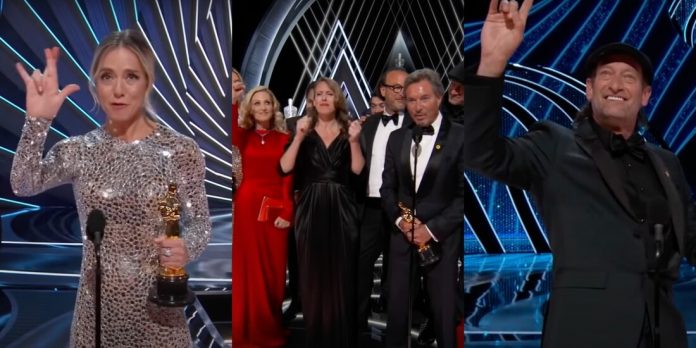 Much has already been written about the remarkable journey “CODA” has taken from its January 2021 premiere at the Sundance Film Festival to its Best Picture win at the Dolby Theatre on Sunday night. With “CODA’s” victory, the book of Oscar statistics that many of us prognosticators cling to every year when making our predictions has been thoroughly stomped on and thrown out the car window. For example, it’s the first film in nearly 90 years to win Best Picture with no nominations in below-the-line categories. With the exception of “Birdman,” “CODA” is the first film in over 40 years to win without a Best Film Editing nomination and its first in over 30 years to win without its director not receiving a nomination from the Directors Guild of America. Just amazing.

But that’s all about “CODA’s” past. Looking forward, what of “CODA’s” future? Here are five significant takeaways that I think we can draw from “CODA’s” Best Picture win.

1. Representation Matters
When “CODA” writer/director Sian Heder first approached actress Marlee Matlin with the film’s script, the Oscar-winning actress not only jumped at the chance to play Jackie Rossi but quickly became “CODA’s” fiercest advocate in getting the film made. In one famous story, when a studio executive suggested that Heder cast a hearing film star to play Matlin’s husband Frank, the actress put her foot down, saying that she would walk if a hearing actor were cast. As a result of her stand, not only did we get Daniel Durant but also Troy Kotsur delivering an Oscar-winning performance for the ages. Will the “CODA” win open doors? Who knows (it’s Hollywood)? But already, 2021 had brought us the first deaf superhero with non-hearing actress Lauren Ridloff in Marvel’s “Eternals,” as well as mute actress Park Yoo-rim whose character’s signing triggered the powerful climax of Best Picture nominee “Drive My Car.” The gains made in 2021 may only be the beginning.

2. A Streaming Service Finally Wins Best Picture
With “CODA’s” victory, yet another huge Oscar barrier has been broken: a streaming service has finally produced a Best Picture winner. While some may say that Netflix walked so that Apple could run, it wasn’t for want of trying from the world’s most popular streaming service. Since 2018, Netflix has produced five Best Picture nominees (“Roma,” “The Irishman,” “Marriage Story,” “Mank,” and “The Trial of the Chicago 7“) with two more (“Don’t Look Up” and “The Power of the Dog“) in this year’s race. It is often speculated that Netflix is resented in some quarters by Academy voters for its deep pockets, both for the cost and ubiquity of its Oscar campaigns and for the creative freedom that it offers to top Hollywood filmmakers who are then lured away from the studios. Apple, by contrast, might be seen as the blameless new kid on the block, despite its even deeper pockets. Netflix will likely soon see its day with a Best Picture winner, but if Apple’s victory with “CODA” means anything, it’s fair warning to Hollywood that to dismiss streamers as major Oscar rivals is at their own peril.

3. A New Crop Of Deaf Stars
Thanks to Matlin’s insistence on non-hearing actors in “CODA,” the world now knows both Durant and Kotsur for the extraordinary actors they are. Both are creatures of the stage — Durant won acclaim on Broadway for the 2015 revival of the musical “Spring Awakening” and Kotsur, a stalwart member of Los Angeles’ Deaf West Theater, appeared in the 2003 Broadway revival of the musical “Big River” — but now both are being introduced to a worldwide audience through the film, a breakthrough that will hopefully lead to equally substantive roles not only for those two actors but also for that small army of deaf actors who are chomping at the bit for the opportunity to bring to life equally three-dimensional characters. No “deaf best friend” roles, please. Matlin, Kotsur, and Durant have ably demonstrated that non-hearing actors can do so much more, and now it’s up to filmmakers to make it happen.

4. Film Twitter Will Likely Crucify It
For all of the adulation and goodwill that will be bestowed on the cast and crew of “CODA” over the next few weeks, there will also sadly be a hidden dark side waiting for them: social media. Already I’ve seen on Film Twitter a number of postings by film trolls dismissing “CODA” as “a glorified afterschool special” or nothing more than (gasp!) “a Disney Channel movie” (As someone who worked on Disney Channel movies for many years, I take particular umbrage at that!). “CODA” is the latest Best Picture winner to take a familiar genre — in this case, the aspirational film — and turn its familiar tropes upside down, finding ways to tell its story in a refreshingly unexpected manner. Still, “CODA” will likely have to undergo some of the scorn that such very good Best Picture winners as “Ordinary People” and “Dances With Wolves” have had to endure for the past few decades for having the audacity to win the Oscar over beloved Martin Scorsese movies. But years from now, it’s a good bet that “CODA” will be rediscovered and appreciated once more as the landmark film it is. Because, after all, “CODA” is nowc…

5. In the Select Company of 93 Other Best Picture Winners
Whenever the social media slime that gets thrown at it eventually dries and gets brushed away, “CODA” will still stand as the 94th film to win the Academy Award for Best Picture. It’s in the history books, and the film’s name will forever be enshrined on the staircase pillars that lead up to the Dolby Theatre. But what will be its long-term legacy? That’s too early to tell quite yet, as the country’s mood may change, and “CODA” might fall in and out of favor over the coming years. But one thing that will help “CODA” endure: its unabashed understanding and love of humanity, which will help it retain its power to move audiences for generations to come. Plus, we have one unexpected bonus: each week for the next year, our listeners will be able to hear every episode of the Next Best Picture Podcast begin with the words “And the Oscar goes to…CODA.”

What did you think of the Oscars last night? What do you think will be “CODA’s” legacy as a Best Picture winner? Where does it rank for you amongst other winners? Let us know your thoughts in the comments section below or on our Twitter account.