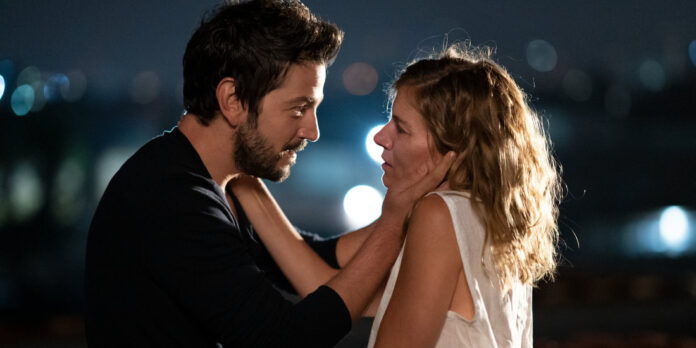 THE STORY – New parents Adrienne and Matteo are forced to reckon with trauma amidst their troubled relationship. They must revisit the memories of their past and unravel haunting truths in order to face their uncertain future.

​​​​“Wander Darkly” asks the question, “What would happen if you took ‘Eternal Sunshine of the Spotless Mind,’ but made the writing more on the nose and made it much more overtly sad?” That is to say, for a film whose execution is intended to be hyper abstract, it actually feels very derivative. However, with strong performances courtesy of Sienna Miller and Diego Luna, as well as Tara Miele’s clockwork-precise direction, elevate the film into something engaging and emotionally impactful by the end.

Most coverage of the film has remained vague so as to avoid spoilers. I will do the same here. As vaguely as possible, the film follows Adrienne (Miller) as she reflects on the aftermath of a traumatic experience and re-examines the entire course of her relationship with her long-term boyfriend, Matteo (Luna). Like “Eternal Sunshine of the Spotless Mind,” the film is highly dreamlike and surreal as it examines the past.

In order to sell the dreamlike illusion, director Tara Miele, cinematographer Carolina Costa, and editors Tamara Meem and Alex O’Flinn pull off an astonishing feat of choreographing every scene and location so as to seamlessly transition to another. The camera movement is fluid, the cuts smooth or hidden, and the actors are blocked so as to make each transition appear natural. Her execution is so impressive that it occasionally leads the viewer to start considering, “Wow, that was really cool! I wonder how they did that?” Which, of course, is something of a problem. But the craftsmanship on display is undeniable.

Beyond the filmmaking skills, what truly grounds the film are its two lead performances. Miller and Luna have undeniable chemistry, and they both sell some very on the nose dialogue. Their interactions feel so natural and believable that you completely believe they’re in love, and you also believe in the curveballs their relationship throws their way. Miller is especially impressive. She navigates comedy, anger, and raw sadness deftly, showing just how amazing her range is.

Ultimately, it’s the strength of these two performances that hooks you to the point that the ending hits hard emotionally. It’s a prime example of performers and technical craftsmanship elevating what’s on the page. Miele and her crew are undeniably talented, and have bright futures ahead, especially if they can work with slightly more refined scripts. Luna reminds us of how underrated he is, and Miller continues her current mini career “renaissance.” “Wander Darkly” is nowhere near as groundbreaking as it wants you to believe, but it’s well-executed, and ultimately, brings the tears by its finale.