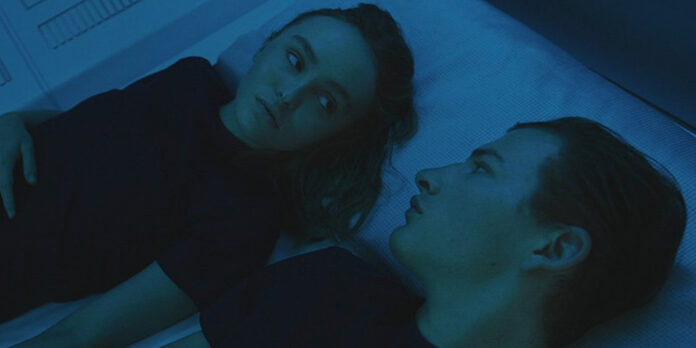 THE STORY – A crew of astronauts on a multi-generational mission descend into paranoia and madness, not knowing what is real or not.

Science-fiction has always been one of the most fascinating genres to explore. It houses a diverse array of stories that can range from introspective and meditative to basic entertainment with little intellectual substance. It can also be the place to examine a great deal of craft while presenting some engaging storytelling. The routes are seemingly endless for unique observations in this arena. Because of such abundance, it can be challenging to make one’s own particular vision stand out and become enrapturing. Undoubtedly, those are the ambitions of “Voyagers,” but unfortunately, it’s a rather tiresome effort to spin an uninspired narrative.

The film takes place in the far-off future, and humanity faces a global crisis that will soon cause Earth to become uninhabitable. The solution is to embark on an eighty-six-year mission to an uninhabited planet and begin a new human civilization. A group of children raised in isolation due to the grueling conditions are sent into space. Joining them is their caretaker Richard (Colin Farrell), who monitors their activity. However, things drastically change once they become teenagers. The young crew is forced to take command on their own, soon after discovering they’ve been drugged into suppressing their emotions. Factions start to clash, headed mainly by the more reasonable Christopher (Tye Sheridan) and the ruthless Zac (Fionn Whitehead). As tensions rise, the group must come to grips with the fears and anxieties that could tear them apart long before their destination is reached.

Neil Burger’s filmography conjures an impression of reliability if not wholly innovative. While one can find impressive creative touches in works like “Limitless” and “The Illusionist,” his skills seem more workmanlike than outright extraordinary. For much of the film, there’s a sleek design employed that serves the setting well. There isn’t much in terms of filmmaking that leads one to overpraise, particularly when the pacing can be pretty repetitive and stagnant. There are breaks when the style seems to overcompensate for the lack of flare with quick edits and a more jovial tone, and to the film’s credit, it is somewhat effective. The moments of suspense are expected but adequate for the material at hand.

Mostly the direction is simply serviceable, but it also can’t compensate for a poorly executed screenplay. Themes that comment on the violence of human nature when left to its own devices are a focus here, but the storytelling is so blunt and pedestrian. The set-up to this world isn’t well-conceived, hurt mostly by the clunky expositional dialogue, and the characters that inhabit it are flat and carry weak motivations. There’s potential in these conflicts to be intriguing, but most of them are incredibly mundane. These issues only become exacerbated as the film progresses, leading to a monotonous and repetitive finale that does little to make one invested in the stakes. The script fails to create a captivating plot and fills its landscape with shallow characters that are nowhere near compelling.

Given the sheer number of roles for this ensemble, it’s disappointing to see so many performances leave such little impact. Most of this, in fairness, is the fault of what’s written on the page. One can bemoan the monotone delivery of Farrell, but his character is intentionally reserved and constructed to influence the plot very little. Only a handful of the young cast gets any kind of moment to speak, let alone actually impress with their portrayals. The best is no doubt Sheridan, who can produce just enough depth in his screen presence to create one of the only relatable characters. Whitehead embodies what could have been a charismatic antagonist, but his delivery is mostly unremarkable. Lily-Rose Depp is the next most prominent of the group, but there’s little she does that is memorable. The whole cast is littered with such examples of actors who are not bad but try their best to succeed with weak parts. There are indeed moments that can be interesting, but nothing collective enough to be noteworthy.

There’s a lot of familiar ground covered in “Voyagers” that one has been accustomed to seeing in previous works. However, that’s not what ultimately lets the film down. Despite the occasional set-piece that manages to be crafted effectively, it’s the overall dull filmmaking and hollow script that leaves much to be desired. As such, not even the performances can save this piece as most are given very little to do, save for a few exceptions. The films that operate in this genre will always be at odds with what has come before, but genuine creativity can make the work far more appealing. Sadly, that is lacking here to a considerable degree.