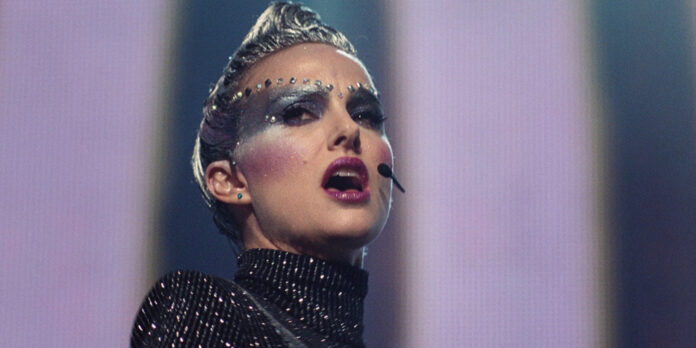 There’s a long list of Hollywood movies that aim to capture the rock star experience, though it’s been some time since interest has so radically peaked. Its modus operandi this time around– the female superstar and her psychological wrestling. Joining Bradley Cooper’s “A Star Is Born” and Alex Ross Perry’s “Her Smell,” is Brady Corbet’s “Vox Lux,” with what I suspect is the most thematically ambitious entry of the three.

“Vox Lux” spans 18 years in the life of Celeste (Natalie Portman), an international mega-popstar akin to Lady Gaga, with some Ziggy Stardust sprinkled in. Celeste’s popstar persona resembles a futuristic glitter-glam barbie, and she carries her hits (catchy, electronic-lite songs furnished behind-the-scenes by executive producer, SIA) with a voice auto-tuned to ethereal perfection. But Corbet’s latest film has very little do with talent or musical ability– in fact, its public knowledge that Celeste’s sister, Eleanor (“Nymphomaniac’s” Stacy Martin) has better singing chops. Corbet’s not interested in the rise to fame as a path to self-discovery, but how the cotton candy musical stylings of pop-stardom mirror dramatics shifts in American society in the age of the millennial. This is only Corbet’s second feature, but its safe to say the man is a daring filmmaker if anything.

The film opens by chronicling Celeste’s childhood with a detached narration from Willem Dafoe, who will occasionally step in throughout the first half of the film to contextualize her rise in relation to current events with an almost biblical authority. Like a big slap across the face, the first “scene” we actually get delivers us straight into a tragic, defining moment in the life of 13-year-old Celeste (Raffey Cassidy), in which she is remarkably the sole survivor of a brutal school shooting, with only a neck injury to show for it.

The year is 1999– same as the year of the massacre at Columbine– and from out beneath the bloody rubble of an event heretofore unseen on such a scale in American life, Celeste performs a self-composed ballad at the victims’ memorial service. Naturally, she blows up, thanks to a handy camera-crew televising the soft, hopeful tune to millions of Americans watching on their TVs. Shades of Faustian intrigue are aglow here, with Celeste seeming to renounce herself to the demands of a grieving American public in exchange for the glory of celebrity, all captured in an austere grey, blue, and brown color palette by the 35mm cinematography of Lol Crawley.

In comes a nameless manager played by Jude Law, who imbues his character with the sort of impatience expected of such industry-men– restless, greasy, but never hyperbolic-ly so. As an on-the-road father figure, Law does his best (and take that with a grain of salt) of chaperoning Celeste as she meets with producers and record labels in Copenhagen and LA, where she along with Eleanor, indulge in all the pleasurable callings of liberated young people: drugs, drinking, crazed, clothes-less nights with older men. Cassidy’s interpretation of the budding diva is steadfast, conveying a fixed dedication beyond her years while baring the loose seams of a vulnerable, naive young girl. A pivotal 24 hour period before her first music video shoot will coincide with the events of 9/11 and glimpses of the woman to-be come through as the Cassidy-led portion of the drama comes to a close.

The first half of “Vox Lux” is an altogether more effective, and interesting piece of filmmaking than the second, which sloppily handles all the thematic elements in play in favor of a straightforward, mad descent into a day in the life of Celeste 18 years later. It’s the year 2017 and the chapter opens on the eve of Celeste’s tour-opening show in her hometown of Staten Island. Continuing the film’s conceit of staging shocking world events simultaneously with key personal dates in Celeste’s life; Croatian terrorists outfitted in Celeste-ian cosplay are shown opening fire on a crowded beach. The world isn’t terribly different from the brutality that marked the opening act of the film, so much as these events no longer carry the same element of surprise. At least this seems to be the case for Celeste (now an ego-maniacal Natalie Portman), who barely bats a glitter-coated eyelash at the news. 18 years of fame and turmoil dumped onto a girl still raw from the horrifying events of her youth, and Celeste has devolved into a deeply unstable primadonna, dripping with bad-girl glamour, complete with an addiction problem and a neglected daughter (Raffey Cassidy again).

Natalie Portman plays Celeste with brilliant, insane energy– disturbing, uncomfortable, but hard to look away from. Her performance alone keeps the second act from sabotaging itself too egregiously with its shallow and didactic means of drawing connections between the power of celebrities and that of terrorists. Not since “Black Swan” have we seen Portman deliver so demonic a performance, though her take on Celeste isn’t metaphorical or expressed through supernatural horror; Portman instead conveys a possession rooted in trauma and fed by the very real corruption of money and fame.

That Corbet wants to knock you over the head with grandiose political commentary is evident, and this often feels overwrought– simply having a significant personal event take place on 9/11 doesn’t in and of itself make for a convincing allegory. One moment, in particular, has Portman proclaiming herself a new religion and crying out against the “commodification of everything,” evoking the delusional, arguably undeserving grandeur of Kanye West, who is also very on-the-nose and obvious when making his supposedly subversive remarks. Portman’s heavy Long Island accent, amplified thrice over from the barely perceptible twang of Cassidy’s rendering is another jarring flourish that doesn’t quite hit the intended note.

Nevertheless, Corbet captures Celeste’s exceptional coming-of-age with a dark prophetic tone. Her present day is channeled with comparable chaotic energy, occasionally veering into a fixed, scientific gaze. From fast-motion sequences of the sisters’ juvenile abandon in Europe, or the euphoric pre-show drug bender in the confines of a hotel room, to the final long tracking shot piggybacking Celeste as she strides towards the stage– “Vox Lux” is filled with bouts of inspired filmmaking, giving at times the sensation of a hard come-up, and at others a sardonic bent from the hidden side of an observation room.

When Portman finally graces the stage, decked out in a skin-tight glitter-blinding catsuit, we’re thrust into the cheering ranks of her fans, as we watch her perform several hits in a row in what feels like a sneak mini-concert. On the one hand, this feels dragged out, like Corbet never quite figured out how to end the whole thing. On the other hand, like Celeste’s sister and daughter looking in from the audience, the whole sequence sucks you in, nearly making you forget all the miserable, tragic events that have unfolded. All that’s left is pop music, and it’s a seductive proposition.