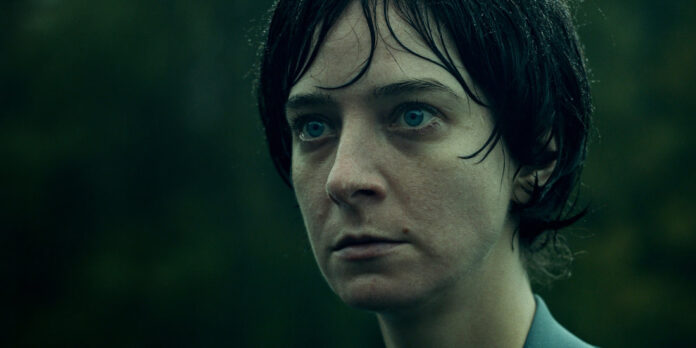 THE STORY – Unhappily married Miriam and Caleb join Miriam’s somewhat-estranged sister Greta and husband Dylan at a lakeside cabin for a weekend of relaxation and reconciliation. Feeling spurned in attempts to connect with both Greta and Caleb, Miriam increasingly retreats to the easy comfort of her friendship with the affable Dylan. After a transgressive act of sexual violence, the film’s narrative vividly fractures, disorienting audiences while inextricably tying their experience to Miriam’s as she embarks on a vicious crusade of revenge.

​​​​​​​​​The place: A picturesque cabin in the woods near a lake. The players: Sisters Miriam and Greta (Madeleine Sims-Fewer and Anna Maguire) and their respective husbands, Caleb and Dylan (Obi Abili and Jesse LaVercombe). It could be the set-up for a horror film or a romance and given the title, it should come as no surprise that “Violation” (co-written and directed by Sims-Fewer and Dusty Mancinelli) comes much closer to the former than the latter. But with its gauzy, color-coded cinematography and love of nature, you’d be forgiven for thinking it might turn into the latter at some point. Opening on a slow-motion shot of a wolf eating a dead rabbit set to an operatic score, it’s clear right from the start that this is not your average, everyday horror flick. More than anything else, Sims-Fewer and Mancinelli’s debut full-length feature feels like a Canadian spin on Lars von Trier’s “Antichrist,” perhaps even a direct rebuke to the director famous for torturing his leading ladies.

All seems well at first, but it quickly becomes apparent that Miriam and Dylan have a closer bond with each other than with either of their respective spouses. Dylan is an old friend and Miriam has an easy rapport with him that could make a lesser man than Caleb jealous. For her part, Greta doesn’t seem too fond of her sister in general, noting with the resigned acceptance that only a sibling can muster that Miriam doesn’t really think about other people. Before we know it, the film has jumped forward in time to another visit to the cabin and it’s clear that whatever animosity there was between the sisters has only grown, although we don’t know why. Sims-Fewer and Mancinelli keep skipping around in time but never in a consistent way, sometimes playing with the narrative like the flow of memory and other times going somewhere because a scene has ended and that’s what they’re doing. This style does pay off in some later scenes after we learn what the title act was. Still, it has the unfortunate side effect of making the first third of the film a bit frustrating and confusing, rendering the by-nature slippery characters almost completely unknowable for most of that time.

The bulk of the film’s middle section is dedicated to two scenes exploring the rape/revenge that the story revolves around, but it is presented in reverse order: We see Miriam’s revenge first and listen as she makes Dylan recount the story of what happened, from his point of view, as she strips him naked, seduces him, and arouses him. Then, we see the rape, from Miriam’s point of view. This scene, shot mostly in extreme close-ups, is where “Violation” does its best work, surrounding a heinous betrayal of trust with the light colors, soft lighting, and whispered soundtrack of a romance, even as it is painfully apparent that for Miriam, it is anything but. It is easy to see both sides of the story, even as Sims-Fewer and Mancinelli (both survivors themselves) clarify that this is indeed an act of violation. It’s a stunning scene, one that lingers in the mind long after the rest of the film has faded away.

Sims-Fewer’s performance radiates astonishing power, painstakingly detailing every emotional turn with remarkable clarity. Miriam is a complex character, one who starts the film with a certain mindset that the film goes almost out of its way to dismantle at every turn. Sims-Fewer makes you feel all the rage and pain that comes with that. More than anything else, it is her performance that gives “Violation” its raw potency. Miriam’s violative act of revenge, while gruesome, is not nearly as gut-wrenching to watch as is her reaction to it, both during and after, as she forces herself to power through her carefully thought-out plan, relieves herself of what pain she can, and makes the first hesitant steps toward the future, acknowledging that she will never be completely free.

It’s a pity, then, that Sims-Fewer and Mancinelli’s high art aspirations get the better of them. The wildlife symbolism, slow-motion, operatic score, and kaleidoscope-like transitions are all over-done to the point where it almost feels like a parody of von Trier’s work as opposed to a response to it. But the film’s tone is just serious enough throughout to make it clear that this is no parody. While the craft on display is of overall high quality, piling this many artsy elements on top of each other lends the film a pretentious air that is antithetical to the grounded honesty of the performances. Whereas von Trier’s pretentiousness feels like a genuine part of his films’ overall package, in “Violation,” it feels like something added on after the fact, as if the filmmakers were in some way unsure of the film as they had originally intended. In their own way, these added elements feel like a violation of the rough, raw story the film is telling, turning it into an art piece that pushes the audience away even as its performances work to bring the audience deeper into the story. The result is effectively unsettling throughout and genuinely heart-stopping in moments, but also uneven and needlessly overdone.