“VALERIAN AND THE CITY OF A THOUSAND PLANETS” 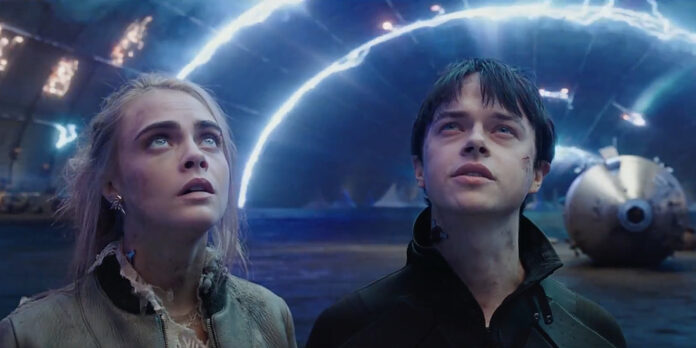 THE STORY – In the 28th century, special operatives Valerian (Dane DeHaan) and Laureline work together to maintain order throughout the human territories. Under assignment from the minister of defense, the duo embarks on a mission to Alpha, an ever-expanding metropolis where diverse species gather to share knowledge and culture. When a dark force threatens the peaceful city, Valerian and Laureline must race against time to identify the menace that also jeopardizes the future of the universe.

When “The Fifth Element” came out in 1997 Luc Besson was already well established after films such as “Nikita” and “Leon: The Professional.” With the sci-action-comedy hit, he hit a new plateau in his career and has been deemed a visionary ever since. “Valerian And The City Of A Thousand Planets” is what “The Fifth Element” would have been like if computer generated imagery was more prevalent as it is today. Which is to say this film is big on vision, visuals, and lore and low on basic storytelling fundamentals. It’s a big disappointment from the never doubtfully talented director who simply makes too many mistakes with this film to validate his level of ambition.

Due to the amount of lore built into “Valerian And The City Of A Thousand Planets,” it makes it very difficult to explain the plot in extreme detail, but here goes nothing. Set hundreds of years after the present day, special operatives Valerian (Dane DeHaan) and Laureline (Cara Delevigngne) are used by the government to restore peace and order to the different human territories within the galaxy. Working under the Commander (Clive Owen) the team/couple travel to Alpha, an ever-expanding city where diverse species gather to share knowledge and their history, for a new mission. An unknown enemy suddenly emerges which threatens the universe, forcing Valerian and Laureline into action while the two also try to work out their feelings for one another.

“Valerian And The City Of A Thousand Planets” already has warning signs going off within the first few minutes of the film as the time it takes for the story to introduce its two main characters (Major Valerian and Sergeant Laureline) is long and drawn out. Once the film does kick in with our two heroes we immediately find out that DeHaan and Delevigngne are devoid of any chemistry between one-another. These are two young (Or are they supposed to be older?) lovers who are attracted to one another but are not fully committed to one another which leads to some of the most laughable dialogue of the year. Now, to be fair, Delevigngne fairs better here than DeHaan. She shows a natural charisma that she did not get to show previously in “Suicide Squad” and as a result, she is one of the best aspects of the film. DeHaan however, is unthinkably bad in this film. With his soft spoken, whispered like line delivery, he fails to engage in every scene he is in further making me wonder what Hollywood sees in the young star. His character single-handedly also brings down the character of Laureline. She shows herself to be a confident, talented and independent woman capable of handling herself but it’s her desire to keep giving the cocky and arrogant Valerian second chances which stifles her own character’s growth and likability.

Say what you will about James Cameron and “Avatar” but that film also had the same level of ambition that Luc Besson’s film tries to have. Although the story of “Avatar” has been criticized for years as being too cliche and simple, it’s a story that worked and allowed “Avatar” to become one of the biggest films of all time. “Valerian And The City Of A Thousand Planets” does not have memorable dialogue, memorable characters or a memorable story. I spent half the film trying to understand what Valerian and Laureline were trying to accomplish with their mission and how all of the different elements fit together. And don’t get me started on the pointless Rihanna dancing sequence that takes up what feels like a full five minutes of the running time! Besson may nail the visuals and the set pieces with stunning imagery but the characters, their performances and the story which they are in service to is completely lacking.

Despite all of this, I still believe “Valerian And The City Of A Thousand Planets” is going to get a Best Visual Effects Oscar Nomination. The technical wizardry on display here is impeccable, along with the film’s art direction, makeup, and costumes. I really wish the score by Alexandre Desplat was more memorable though, as it adds absolutely nothing to the film’s emotion or sense of wonder. While Besson gets a lot of the technical merits correct “Valerian And The City Of A Thousand Planets” is missing many major storytelling essentials to make it a great movie. It may be an impressive film in many ways but only artificially so.