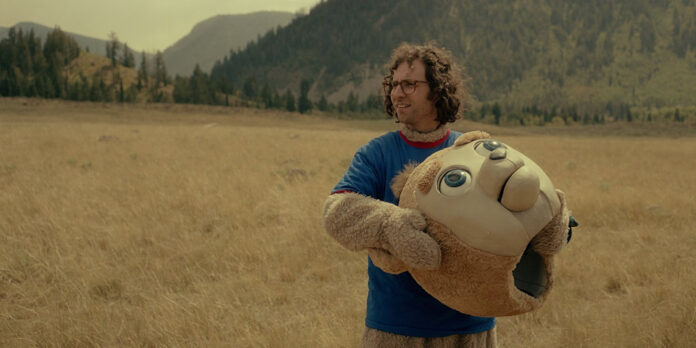 THE STORY – The show “Brigsby Bear Adventures” is a children’s television program produced for an audience of one: James Pope. When the series abruptly ends, Pope’s life changes forever as he sets out to finish the storyline himself. To do that, he must learn how to cope with the realities of a new world that he knows nothing about.

“Brigsby Bear’ stands as the one film so far in 2017 I saw with absolutely zero expectations. I had not seen the trailer. I did not receive a plot synopsis. I barely even knew who was in it. I was recommended to see it by a friend who saw it at this year’s Sundance Film Festival and I must say, I was pleasantly surprised. This off-beat, sometimes sweet, sometimes dark and sometimes incredibly awkward comedy film hit all the right notes for me on a personal level, making this one of the most informal reviews I have ever written.

James Pope (Kyle Mooney) is a twenty-something-year-old who lives with his mother (Jane Adams) and father (Mark Hamill) underground out in the desert. He’s not allowed to go outside of the compound where they live and if he does go outside, he must wear a gas mask to protect himself from the poisonous air, or so his parents tell him. The one thing that James looks forward to every day is watching the television show “Brigsby Bear Adventures,” which is a children’s television program focusing on a live-action bear that is based within the genres of fantasy and science fiction. James is the show’s only viewer, for his “parents” are the ones who manufacture every aspect of the show for their son’s development. After discovering that his parents are not his real parents at all and that they stole him from his biological parents when he was younger, James is reunited with his real family. He then learns the devastating news that the show which has defined his life is a lie. Attempting to cope in a world without Brigsby Bear becomes too much for the awkward young man to handle and so he sets off on an adventure of his own: to make a movie finishing the “Brigsby Bear Adventures.”

First and foremost, to understand how I feel about “Brigsby Bear” one must know a little bit about myself. I have a very odd view of the world, meaning I prefer to not necessarily view the world for all of its imperfections, despair, and horror. I understand that there is good in this world and that not everything is all that terrible. However, I choose to immerse myself in “other worlds” whether it be through film or television in an effort to escape this reality we call life. It has not only been beneficial for me in attempting to understand different perspectives of life, through art, but it has also provided me with great joy. It’s the reason that NextBestPicture.com exists today. When one immerses themselves in something they feel truly passionate about, one of the natural tendencies that comes along with that level of enthusiasm is your desire to share that with the world and this is what defines the character of James Pope.

James is a fan of a show that no one else has ever watched. It’s the only show he has ever seen and as a result, it has consumed his life. It would be like if only I had ever seen “Game Of Thrones” and no one else in the world had (Both are also “fantasy” shows). I would be not only in disbelief that no one else had seen this show, I would be doing everything in my power to get people to watch the show so they could see what I see, feel what I feel and experience the art within. This is what sums up “Brigsby Bear.” It’s a film about the communal experience of creating art and sharing it with the world. The film may start off dark and there were times while watching that I was afraid that the film would veer off too far into that territory. However, director Dave McCary and writers Kyle Mooney and Kevin Costello never lose the film’s playfully comedic and off-beat tone. In fact, “Brigsby Bear” may just be one of the most heart warming films I see all year precisely because it celebrates the joy of making movies. How could I not love this movie as a result?

Not only does Kyle Mooney co-write the screenplay but his damaged and joyful performance as James Pope is what anchors the movie. Isolated, closed off and unable to fully connect with people by regular societal standards, James is only able to fully engage with people through his love of the manufactured television show “Brigsby Bear.” His love for the show is seen as a negative character trait by his natural family as it may prohibit James from fully appreciating life through more conventional means. But James is enjoying life. James is living his life through the power of art. While “Brigsby Bear” is no “Citizen Kane,” it has enough lore and backstory to make it into its very own “Star Wars” or “Star Trek.” One character named Spencer (Jorge David Lendeborg Jr.) who befriends James in the film and helps him create the Brigsby Bear Movie, shows that he is a fan of these kinds of films and others such as “Tron” and “Heavy Metal.” He is what many would consider a “geek” in 2017. He still finds time to party with his friends, socialize and fuel his own creativity. He just happens to be a fan of these kinds of movies. James’ unfortunate circumstances have put him in a position where he is at the extreme end of this spectrum. Kyle Mooney’s performance may be childish at times but never in a false or distracting way. The performance feels real. It makes you feel. I connected with this character deeply and was rooting for him every step of the way.

Supporting performances are all solid also don’t distract from the story being told or the film’s message. Mark Hamill is perfectly utilized for his voice-acting skills while Greg Kinnear is warm and a welcome presence as the detective on James’ false family’s case. Also, Matt Walsh and Michaela Watkins as James’ parents, bring many different emotions to their roles as they desperately try to connect with their supposedly lost son. I was not prepared for how much I would be moved by “Brigsby Bear” and how much it would connect with me on a personal level. I cannot remember the last time that I fully understood a character as much as I do with this film. His enthusiasm, his energy, his love and desire to share that with the world through creativity is one of the most beautiful stories I have seen in the cinema this year and I am now in a position to do the same for you. You may not react to it the same way that I did but for all that it does get right in terms of its tone, characterization, and story, please do seek out “Brigsby Bear.”