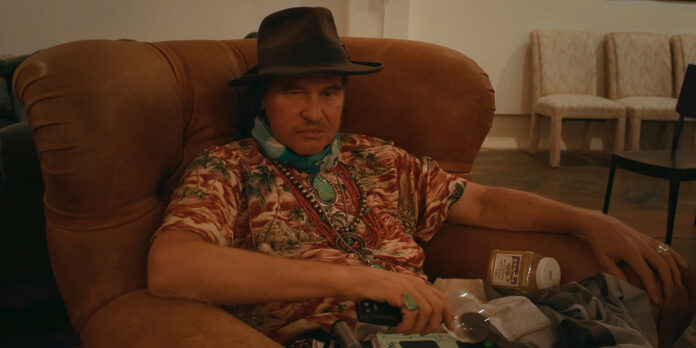 THE STORY – Forty years of never-before-seen footage chronicling the life of Val Kilmer.

​​Everyone wants to be Batman…until they get in the suit. That’s according to Val Kilmer, who played the titular role in 1995’s “Batman Forever.” It all looks cool on the big screen — the Batmobile, fighting crime and wearing the iconic suit — but when you’re in it, you find it’s hard to breathe, hear anything and even stand without toppling over, and all of that ultimately hinders a performance. Getting poor reviews is likely hard for any actor, but Kilmer never let them define him. Nor did he ever let anything stand in his way from being his unequivocal self at every stage of his life, and today, we have the footage to see it all.

Kilmer’s life is on display in the documentary “Val,” which features more than 40 years of footage he captured from his childhood to starting in acting to becoming a big name in Hollywood to ultimately what his life looks like today. He’s an actor who has always looked larger than life on the big screen, but getting this personal look into his ups and downs makes one feel like we can finally get to know him and relate to him on so many levels.

Today, Kilmer isn’t in the latest blockbuster hits, mainly due to battling throat cancer and undergoing a procedure on his trachea, which has left his voice raspy and often hard to understand. But this documentary isn’t made so that you feel pity for him. Instead, he continues to stand tall, show up for his fans, and be the jokester he’s always been. Despite losing his voice, “I want to tell my story more than ever,” Kilmer says in the documentary. With the help of his son, Jack, who narrates most of the film, we get to hear it.

Documentaries often don’t have all the footage you might want or need, but the videos Kilmer captured are a treasure trove. It’s sweet to see when his love of acting started while making home movies with his brothers. We see him come alive on stage and be his charismatic self, especially when hanging out backstage with Broadway costars and youngsters Sean Penn and Kevin Bacon. His audition tapes for roles he ultimately did not get are wonderful as well, making one wonder what “Full Metal Jacket” or “Goodfellas” would have been like had Kilmer been cast. These quiet moments, where he’s himself, make it easy to understand how he came to rule Hollywood for years. This footage also shows deeper sides to him, such as how his brother Wesley, passing away at 15 years old, has affected him throughout his life.

As Kilmer’s fame and prominence rose in Hollywood, the footage he captures gets more and more enjoyable. There are moments of him hanging out with Tom Cruise and the rest of the “Top Gun” cast, and he explains how on-screen rivalries carried over when the cameras weren’t rolling to evoke the high stakes environment seen in the film (but adds there was nothing but love and admiration across the board). Kilmer also reveals he initially didn’t want to do the movie, feeling it was “war-mongering,” but had no other option since he was contractually obligated. It’s a revelation most probably would never have expected. On the set of another film, “The Island of Dr. Moreau,” which allowed him to star alongside his acting hero, Marlon Brando, Kilmer’s footage shows tension with the director and how miserable other actors looked on set. His behavior on sets labeled him as a difficult actor, which the documentary briefly touches on. Still, thanks to all the footage we get to see from his career and personal life, full of the good and bad times, audiences will likely wonder how that label ever attached itself to him.

All of it leads to Kilmer in the present day. He’s typically dressed in wild color and pattern combinations, quite different from the stereotypical leading man, but what would you expect from this funny man at this point? But he gets honest about where he’s at, admitting he feels like he’s selling his “old self” and career while at a fan event for the 1993 film “Tombstone.” We also see him get sick at Comic-Con in London as he’s wheeled off with a red blanket over his body. But in both instances, Kilmer comes back with a smile, showing his strength, perseverance, and gratitude to fans. It’s a harsh reality to have to face, but Kilmer’s true spirit always manages to shine through. If there’s a slight criticism to this documentary, it’s that we didn’t get more of these moments. This is when the film digs deepest and reaches the reflective moments we expect from documentaries such as this. However, “Val” makes us sympathize with our protagonist and takes us on a journey, thanks to home footage, that many other documentaries can’t.

“Val” does a great job of showing us Kilmer’s rise and conquering of Hollywood and contrasting it to his life today. Though times have changed and life hasn’t always been easy, Kilmer is still cracking jokes and larger than life. Home footage can make a documentary stand apart. Seeing how well it worked with this film, hopefully, we will see more of it in the future.