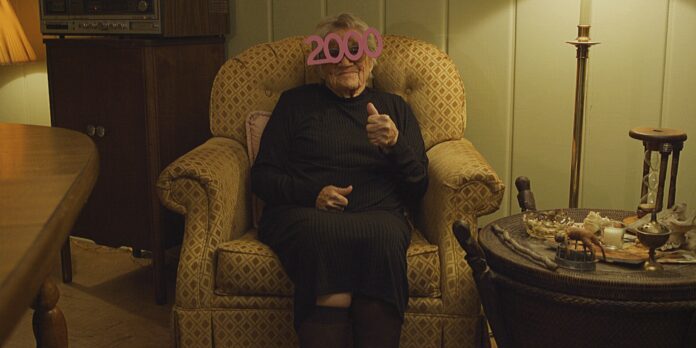 THE STORY – “V/H/S/99” marks the return of the acclaimed found footage anthology franchise and the sequel to Shudder’s most-watched premiere of 2021. A thirsty teenager’s home video leads to a series of horrifying revelations. “V/H/S/99” harkens back to the final punk rock analog days of VHS while taking one giant leap forward into the hellish new millennium.

By their very definition, horror anthologies tend to be a mixed bag. Often, only one or two segments will stand out while the rest struggle to tell a compelling scary story in such a short amount of time. In that sense, the “V/H/S” franchise is different. The first two films are fun exercises in short-form horror storytelling, and last year’s “V/H/S/94” was a welcome return to form after the disastrously bad “V/H/S: Viral.” Following the retro format of “94” is the newest entry – “V/H/S/99.” And while it does feature some memorable sequences, on the whole, it is a step down from the unexpected triumph of its predecessor.

The very structure of the film doesn’t allow for a typical overarching critique of the movie. Unlike the previous films in the series, there is no framing story to justify why exactly the audience is being shown these short films. Rather, we’re treated to seemingly pointless interludes showing a child playing with toy soldiers and animating them via rudimentary stop-motion. Thus, the film lacks cohesion and, instead, has a random and untethered feeling.

“V/H/S/99” kicks off with a segment called “Shredding,” about four wannabe-punk kids whose latest mischievous plan is to break into an abandoned rock venue that was the site of a grisly massacre after a fire broke out and caused a stampede. This chapter revels in the ’90s teenage dirtbag aesthetic that is currently seeing a revival on TikTok. Overall, the quartet is an unlikeable bunch (a theme that will continue throughout the movie). Regrettably, none of the actors are quite good enough to overcome the lackluster character writing. Outside of the punk energy, this segment is disappointingly empty.

However, it’s immediately followed by what’s easily the film’s best chapter. “Suicide Bid” is a tight and compacted tale about a young woman, Lily (Ally Ioannides), who is desperate to be accepted into a sorority at her college. Her would-be sisters reveal that they will allow her into their club if she can complete a final hazing ritual – in honor of a campus legend, she must spend the night buried alive in a coffin. The director, Johannes Roberts, wisely sets most of the short film in the actual coffin, and surprisingly, given the minuscule run time, it’s patient and painful. Ioannides helps ramp up the scare factor with a committed and terrified performance. She even manages to find distinct variations in the levels of her fear. This segment is a true stand-out.

Up next is “Ozzy’s Dungeon,” a tonally bizarre little story about a children’s game show that is clearly inspired by Nickelodeon’s “Legends of the Hidden Temple.” And while that is an intriguing set-up, this segment is confounding in its execution. This short film is, almost shockingly, given how little time it’s allowed, broken up into three distinct acts, and none of them seem to follow the other logically. Rather than being scary, it is merely perverse and gross, with (again) unlikable characters. Thankfully, the performances are maximalist enough to match the oddball energy, but this segment is more puzzling than anything else.

The low point of “V/H/S/99” is the penultimate chapter, “The Gawkers.” It’s a simple premise – a group of hormonal teenage boys spends their days getting into trouble and spying on their attractive neighbor. In fact, they’re so smitten with her that one of the boy’s brothers gets recruited into installing spyware on her computer so they can take their peeping to the next level. This part is filled with nothing but – you guessed it – unlikable characters. It’s also guilty of the greatest sin that a found footage movie can commit: it makes extensive use of sound effects and stings that are obviously not part of the footage actually being shown, ruining the illusion of the form. But worst of all, nearly the entire segment comprises the rowdy group’s misadventures and misdeeds, not approaching anything resembling horror until the very end. It’s an extremely unpleasant watch.

Wrapping things up is “To Hell and Back,” an unexpectedly ambitious short story that explores a location that feels antithetical to the very nature of found footage films: Hell itself. A documentarian duo is accidentally transported to the underworld while filming a cult’s demon-summoning ceremony. What follows is a gleefully nasty journey as the pair tries to get back to their mortal plane. It wisely employs a goofy tone, which contrasts surprisingly well with the foreboding setting. In fact, it’s somewhat reminiscent of ’90s comic adventures, as if “The Mummy” took place in Hell instead of Egypt. The set and creature designs are darkly fun, even if they look a bit cheap in execution. In addition, the choice to make this Hell an empty, desolate place rather than an overpopulated minefield of demonic activity is a smart one. The heroes, and therefore the audience, never know what horror is around the corner.

“V/H/S/99” is an uneven anthology film with more unsuccessful segments than successful ones. Overall, it seems more interested in creating a nasty, raucous vibe that evokes the time period rather than actually scaring its audience. The second chapter, “Suicide Bid,” is a high point, but otherwise, this is a VHS you’re better off ejecting.

Powered by JustWatch
Share
Facebook
Twitter
Copy URL
Previous article
“ALL QUIET ON THE WESTERN FRONT”
Next article
Everything Was Happening, Everywhere, All At Once, And We Didn’t Even Realize It

<b>THE GOOD - </b>The second chapter of this anthology film, titled "Suicide Bid," is genuinely scary and well-made. The film's grimy '90s aesthetic is a fun throwback.<br><br> <b>THE BAD - </b>The film seems more interested in creating a nasty, raucous atmosphere that evokes the time period rather than actually scaring its audience. The most common thread between the various segments is an abundance of unlikeable characters, which makes for a disconcertingly unpleasant viewing experience.<br><br> <b>THE OSCAR PROSPECTS - </b>None<br><br> <b>THE FINAL SCORE - </b>5/10<br><br>"V/H/S/99"