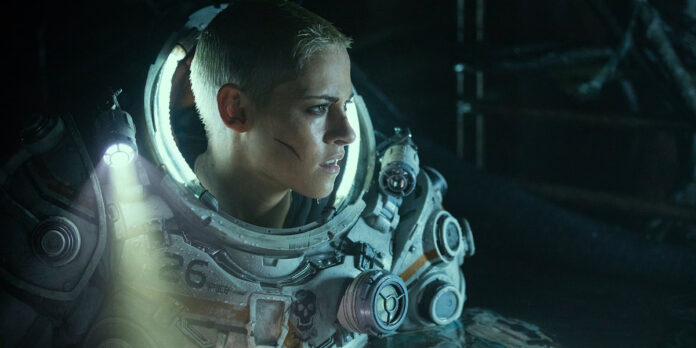 THE STORY – Mysterious creatures terrorize crew members aboard a research station located seven miles below the surface of the ocean.

​​​​In space, no one can hear you scream but in  “Underwater,” everyone can hear you drowning. Welcome to that wonderful time of the year for moviegoers known as January. Here, we are treated to some of the worst films you are likely to see all year with maybe one or two hidden gems in there. “Underwater” is not one of those gems. No, this movie for me was the cinematic equivalent of drowning, with no air to breathe, while the panic set in, took over and never let me go. Director William Eubank wants this sci-horror film to be “Alien” for a new generation but my guess is this one will be thrown back into the depths.

The Kepler Station is miles below the ocean’s surface with a crew of over 300 digging for oil deep within the Earth. Without warning, the station starts to take on serious damage. As pieces of the station begin to break apart, the water floods in and the pressure threatens to physically crush their bodies, the surviving members of the crew, Norah (Kristen Stewart), Paul (T.J. Miller), Rodrigo (Mamoudou Athie), Emily (Jessica Henwick), Liam (John Gallagher Jr.) and their Captain (Vincent Cassel), must fight their way to the surface if they are to survive. However, they soon find out they are not alone, as mysterious alien creatures they have awakened deep within the Earth are terrorizing them as their options for survival dwindle.

Right from the animated opening titles, I knew I was in trouble with “Underwater.” To the movie’s credit, it does throw us into the narrative rather quickly and wastes no time in getting straight to the action and thrills. However, character development is sacrificed in the process and nothing, especially a bunch of lame jokes from T.J. Miller, could get me to care about these characters. There is a constant theme of sacrifice that is woven in throughout the film for Kristen Stewart’s character Norah. However, the film is so fixated on moving at such a break-neck pace, that we’re never given a chance to get some oxygen and take in what the film is ultimately trying to communicate. Instead, we’re treated to forced lines of dialogue which have to overcompensate for the film’s rushed storytelling leading to some heavy morality lesson on harming the Earth for its resources or something. But hey! Why should we care when there are giant monsters…underwater!!

I wish I could praise the technical aspects of this movie since I’m sure the challenges of making an underwater film must’ve been draining for all involved. However, I cannot justify the film’s clunky sound mixing which constantly muffles dialogue or the dark and murky cinematography which makes the action frustratingly hard to follow. There are some jump scares in here but it’s really hard to be truly frightened when I’m not invested in a single degree of filmmaking on display in front and behind the camera.

With a cast that lacks any chemistry together, technicals that look like they’re trying to hide other more obvious flaws and a script that doesn’t care one bit about its characters, “Underwater” is exactly the kind of film that was built for the month of January. Such a wasteland of a cinematic month deserves a lifeless genre picture filled with this many implausible and laughable moments. The biggest proof of this movie’s flaws lies in one bit towards the end where the filmmakers would rather have Kristen Stewart punch Jessica Heniwck in the face to solve a problem rather than talk it out as normal and fully formed characters would do. Why? The answer and this film’s cinematic quality lie at the bottom of the ocean I suspect.