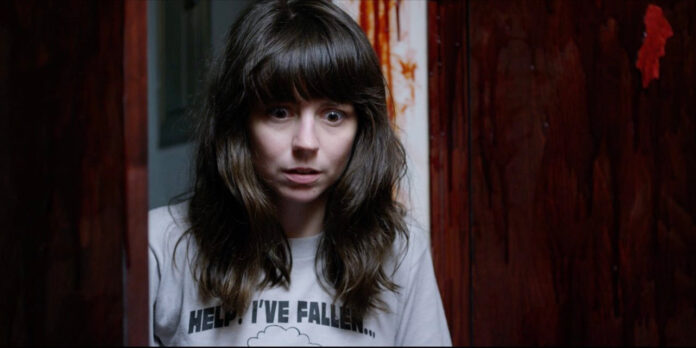 THE STORY – Terror strikes when a man-eating roadie joins a bassist and her punk-rock band on their first tour.
​
THE CAST – Chet Siegel, Ruby McCollister, Jeff Riddle & David H. Littleton

​​​​As this summer is winding down (not that it ever felt like it really began), I find myself already looking ahead to the fall, specifically, the best thing that happens in that season: Halloween. Like many horror fans, the second that August 31st passes, I like to begin cramming in as many horror movies as possible. The new horror-music-comedy film, “Uncle Peckerhead,” is exactly the kind of goofy, ridiculous, and fun movie that I would want to watch this time of year. It combines the easy, summer-esque feeling of a road movie with the horror-tinged antics of the perfect fall film.
​
The movie follows an up-and-coming punk band named DUH as they embark on their first tour. But before they can even hit the road, they run into a small problem: their van is repossessed. In a desperate attempt to acquire any sort of transportation, the trio takes a drifter named Peckerhead (or “Peck” for short, played by David Littleton) up on his offer to be their roadie in exchange for the use of his van. All seems well until they make a shocking discovery: Peck turns into an uncontrollable, flesh-eating monster every night at midnight. This may seem like the most punk rock thing that could happen to a band, but chaos, conflict, and hilarity quickly overtakes the touring musicians.

If this zany concept seems too “out there” to be scary, that’s because it is. This is a horror-themed comedy first and foremost, rather than a horror movie with comedic moments. All of the potentially terrifying moments are smartly over-the-top. There are gallons upon gallons of blood and dismemberments straight out of “Mortal Kombat,” and the sheer audacity of these moments of mega-gore are always hilarious. It may be a bit too much for some when other bodily fluids come into play, but if you’re already along for the ride there’s no reason you will be turned off at that point.

It’s not just the special effects that are broad and ridiculous. The script is unending in its character-based humor, and not all of it fully lands. The band is made up of three members: our main character Judy (an assured performance from Chet Siegel), Max (Jeff Riddle), and Mel (Ruby McCollister). Judy is a surprisingly grounded character who acts as the straight man to most of the humor, while Max and Mel are unending joke machines. The character traits of the latter two are anything but subtle, and while the performances of these actors are committed, the two bandmates sometimes come across less like characters and more like caricatures. But in a movie that features a head being ripped out of a neck, spine and all, subtlety is clearly not something they were aiming for.

The best performance in the film comes from David Littleton as the titular Peckerhead. Maybe the most challenging aspect of the film is the idea that we’re supposed to sympathize with a cannibalistic monster, and thanks to Littleton’s charming and charismatic performance, this isn’t hard to do. He’s funny and strangely sweet, and the film wouldn’t work if he weren’t so good.

If the specific vibe of this admittedly niche film sounds like something you would enjoy, I highly recommend it. But if gross-out gags, outrageous gore, and unrealistic characters (even by fantasy movie standards) would get in the way of your enjoyment, then obviously this movie isn’t for you. If only the world weren’t seemingly perched on the brink of apocalypse, this would be the perfect midnight movie to watch with some friends over a beer or four.