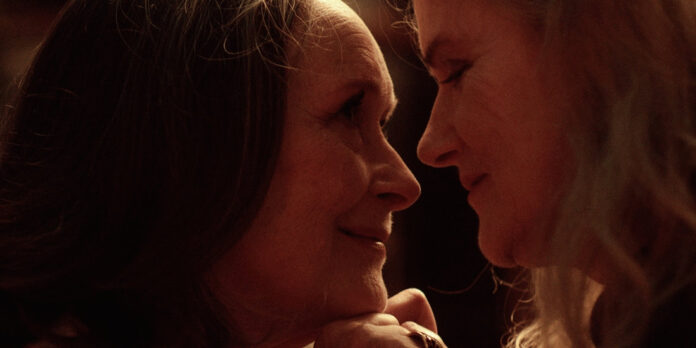 THE STORY – Nina and Madeleine, two retired women, are secretly deeply in love for decades. From everybody’s point of view, including Madeleine’s family, they are simply neighbours living on the top floor of their building. They come and go between their two apartments, sharing the tender delights of everyday life together. Until the day their relationship is turned upside down by an unexpected event leading Madeleine’s daughter to slowly unveil the truth about them.​
​
THE CAST – Barbara Sukowa, Martine Chevallier & Léa Drucker
​
THE TEAM – Filippo Meneghetti (Director/Writer) & Malysone Bovorasmy (Writer)​

​​​​​​Filippo Meneghetti’s narrative feature debut, “Two of Us” (or “Deux” in France), begins with a disappearance. As two young girls are playing hide and seek on a long, tree-lined stretch of road, one moves to hide behind a tree. Just as you think the other is about to find her, it becomes clear that the hider has vanished without a trace. This dream-like prologue does end up having a role in the film’s narrative, but its purpose feels more thematic – when all you care about is one other person, what does it feel like without them?

Pensioners Nina and Madeleine have been in a romantic relationship for many years. Madeleine (Martine Chevallier) is finally ready to come out to her adult children – who believe Nina (Barbara Sukowa) is just their mother’s neighbor – but can’t quite bring herself to do so. After Madeleine suffers a debilitating stroke, Nina finds herself locked out of the life she used to lead, confined to the apartment she used to only hide in for short periods. This literalization of the metaphorical closet is taken a step further by the production design. It’s clear as soon as we step inside Nina’s apartment that she never really lived there – there are more cardboard boxes than pieces of furniture and nothing in the refrigerator. The metaphor deepens by its connection to Madeleine’s mental state; it’s not that Nina doesn’t exist to her, but Nina and all Madeleine’s memories of her are locked away in some compartment in her brain, unable to be spoken. When Madeleine’s daughter hires a home health aide to live with her mother, Nina feels even more alone and becomes increasingly desperate to get to her love. But what will she do? How far will she go? Will she ever be able to reclaim the life she shared with Madeleine?

The pain of Nina’s plight is easy to empathize with even on paper but Sukowa’s performance makes the pain she’s feeling palpable. The pained expression as she looks out her apartment’s peephole, straining for any news of Madeleine’s condition, distills a lifetime of fear and hurt into one look. Meneghetti’s direction also helps to put the audience in Nina’s shoes, making smart use of editing and sound to keep us off-balance and feeling like we should be elsewhere. While Nina is our point of view character, Meneghetti makes sure to let us into Madeleine’s experience as well. Chevallier turns in a haunting performance as a woman trying to find her courage but can’t necessarily remember why; maybe she doesn’t even know who she is and cannot express herself in any easily understood way. Madeleine may not have control enough over her body to have anything other than a placid smile on her face, but Chevallier makes it clear that she is struggling to get something out.

The plot of “Two of Us” would seem to invite melodrama, but Meneghetti largely avoids it, choosing instead to keep everything grounded except for a couple of key moments. He lets the emotion come naturally instead of wallowing in it, mirroring Nina’s determination to take her life back and not just sit and wait in despair. Both Sukowa and Chevallier’s performances communicate the love and pain of a long romance that has been tested by both external and internal forces, and the great strength of the film is that it makes the audience feel like they’re in that relationship right alongside them. You feel everything these women are going through and understand every decision they make, even if you can see how it will backfire. The journey “Two of Us” takes you on may be one you’ve taken before, but the way this film makes you feel on that journey is entirely unique and a testament to the power of cinematic art to make us feel.