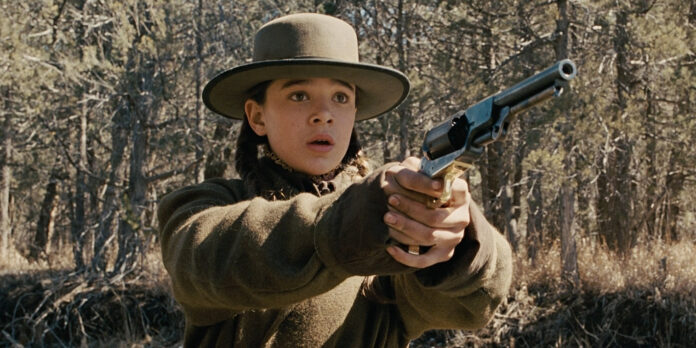 The western genre can always be a tricky one to take on, especially in today’s modern times. Its prolific status has severely diminished over the decades for a myriad of reasons, and one could point to the limited range in storytelling that has usually been presented. The moral quandaries are typically outlined in a strict presentation that leaves little room for nuanced approaches. However, when a film in this usually restrictive genre can indulge in more complex portraits of characters and themes, it can be an intriguing and engaging watch. “True Git” occupies a sort of middle ground between traditional and revisionist western tropes, and the results are a thoroughly entertaining experience.

The story revolves around Mattie Ross (Hailee Steinfeld), a spirited and headstrong fourteen-year-old girl dealing with the aftermath of her father’s murder. She is determined to see his killer, Tom Cheney (Josh Brolin), brought to justice and seeks to hire a bounty hunter to pursue him. She ends up choosing Marshall Rooster Cogburn (Jeff Bridges), a man described as having “true grit” and an ornery temperament that is seen as highly effective. However, her quest for justice also crosses paths with Texas Ranger LaBoeuf (Matt Damon) and his own pursuit of Cheney. All three have a contentious partnership that is repeatedly thwarted but also finds their bonds intensifying and growing to appreciate the tenacity of their inner strength.

Few directors have a filmography quite as strong as the Coen brothers. Their unique sensibilities always manage to find interesting stories to tell while also mining a darkly comic tone. Much of their trademarks can be seen here, even though they may not be as fully developed as seen in other works. The thematic weight of the material doesn’t approach the intricacies of their towering achievements, and that does make one feel as if this effort is somewhat slight. At the same time, one cannot deny the thoroughly entertaining expedition these characters find themselves in. Even though the script itself may present a relatively straightforward tale, the dialogue’s lyricism is wholly engaging and can’t help but bring a smile with so many witty retorts.

Even though this may not be one of the most outstanding examples of storytelling the Coens have provided, that doesn’t mean their usual hallmarks aren’t present that makes them such fascinating filmmakers. They are still finely attuned to a compelling plot that results in what is most likely the most accessible film they’ve ever made. With impeccable crafts on display, highlighted mainly by the gorgeous cinematography from Roger Deakins, the world feels detailed in its period representation and enthralling in the adventures it presents. Present still is the offbeat and darkly comedic tone that punctuates many scenes. It comes across as an example to showcase what makes the Coens so great while reconfiguring the balance for a more mainstream audience. It could have the effect of being a watered-down version of their more robust achievements. However, the product here is still a thoroughly engrossing tale of lost innocence and bittersweet resolutions. One may take issue with a slowed pace in the second act and a truncated epilogue, but most of what’s presented here is a fine piece of storytelling.

Films by the Coens are also usually marked by an incredible array of performances, and that is no different here. For many, Bridges is the headliner and it’s hard not to be taken in by a commanding turn that totally captures your attention. His rough drawl and obstinate demeanor have an infectious charm that’s difficult not to be won over by. It’s an acceptable performance that ranks as one of his most memorable turns, if not the most challenging. The real asset here is Steinfeld, making an astonishing feature film debut. The emotional weight that is expected of her is tremendous, and she heroically captures a character whose strength and determination are battling against a vulnerable insecurity. Her command of the language is impressive, and she carries so much of the film’s success on her shoulders alone. It’s a child performance that is so assured that it nearly feels unnatural, and proceeding roles have only shown her talent even more.

Damon is probably the least effective amongst the trio, but that is not to say he is delivering a bad performance either. In fact, he also manages to have a slick charisma that is effective for the role and has some genuinely emotional moments that are well captured. His character may not be the most captivating, but he does a fine job holding his own. Brolin is quite stunning here, offering more detailed character work that has been seen from him previously. Despite limited screen time, he actually is one of the best elements of a strong ensemble. With other notable performances from the likes of Barry Pepper, Domhnall Gleeson, Elizabeth Marvel and a slew of other perfectly suited character actors, the entire cast is worthy of celebration.

No film is ever perfect, and there are moments in “True Grit” where the pacing suffers slightly and some conclusions feel a bit rushed. It’s also difficult not to compare this to the much stronger films in the Coens’ library, and it doesn’t come near the quality level of those masterpieces. At the same time, it’s hard not to recognize just how entertaining these results are. With great lively dialogue, excellent crafts and a host of fantastic performances, nearly every inch of this film is to be celebrated. It doesn’t reach the heights of the more complex Westerns that have been made, but the film still manages to show that the genre can offer so much to enjoy.