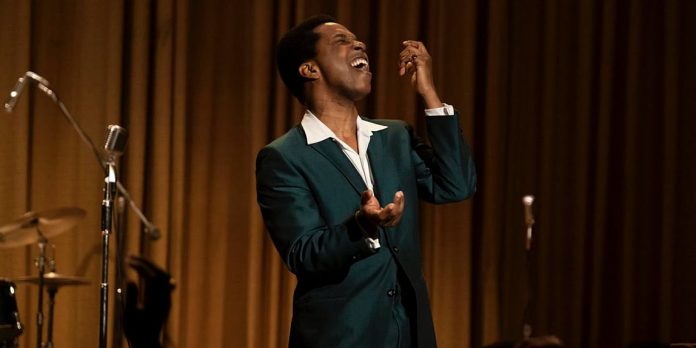 Best Original Song is always one of the most hit-or-miss categories at the Academy Awards. Some years, narrowing down a strong list of contenders is a tough task, with incredible songs eventually missing the cut. Other years, it’s a little harder to imagine which five songs the Academy will even be passionate about. 2020 seems like it might be a weaker year for the category. That said, there are still some great songs and some solid contenders. Let’s take a look at where Best Original Song stands now.​

​The clear frontrunner to win is “Speak Now” from “One Night in Miami….” Leslie Odom Jr.’s end-credits anthem is a powerful and timely track that pairs well with the film’s themes. It’s one of the few song contenders from a sure-fire Best Picture nominee, ensuring it will be heard by voters. Odom Jr. is also a formidable contender for Best Supporting Actor. The past three years have seen an actress nominated for both acting and songwriting (Mary J. Blige for “Mudbound,” Lady Gaga for “A Star is Born,” and Cynthia Erivo for “Harriet“). Odom Jr. is likely to continue this new tradition, becoming the first man nominated in both categories in the same year.

After “Speak Now,” we can’t forget about Diane Warren. The perennial nominee has a few songs in play this year, but it’s “lo sì (Seen)” from “The Life Ahead” that is most likely to garner Warren her twelfth nomination (and fourth consecutive nomination). Warren is one of the most nominated artists without an Oscar win, and she always campaigns strongly. With the overdue narrative and the power of Netflix behind her, there’s certainly a possibility that Warren finally snags a win, though the relatively low profile of “The Life Ahead” doesn’t do her any favors. The film wasn’t selected as Italy’s International Feature submission – a big miss. While Sophia Loren is still in the mix for Best Actress, the chances are looking less likely each day. Still, “lo sì (Seen)” should be safe for a nomination.

“The Life Ahead” is certainly not the only Netflix film looking for a nomination here. “Rocket to the Moon” from “Over the Moon” is the sort of soaring musical ballad that the Academy tends to nominate. Animated films often do quite well in Original Song, with two nominated just last year. “Over the Moon” is sure to land a spot in Best Animated Feature, and this song will come along with it. Another animated feature, “Trolls World Tour,” could snag a nomination for “Just Sing,” following up on the first film’s nomination.

After those three songs, the state of things gets much murkier. Numerous other Netflix songs could make up the other nominees. “The Trial of the Chicago 7” could be our Best Picture winner, so we should strongly consider the end credits song, “Hear My Voice.” It’s fairly traditional, so it’s easy to imagine it finding support. “The Prom” is one of the only true musicals in the mix, so “Wear Your Crown” shouldn’t be ruled out. Plus, who doesn’t want to see Meryl Streep rapping at the Oscars? Additionally, Taylor Swift has had quite a year, but it all kicked off with her Netflix documentary, “Miss Americana.” Her song from the film, “Only the Young,” could be in play – though releasing two full albums since then probably overshadows the song a bit.

​Another documentary that could easily score a nomination here is “All In: The Fight for Democracy” with Janelle Monae’s “Turntables.” After Stacey Abrams’ incredible work fighting voter suppression in Georgia, and with their Senate runoff underway, this song (and the documentary itself) could find lots of support.

A few comedies also have songs in play this year. “Wuhan Flu” from “Borat Subsequent Moviefilm” is intentionally incendiary, and it’s hard to see it being performed in the ceremony, but the film has support. “Eurovision Song Contest: The Story of Fire Saga” would be an unexpected presence at the Oscars, but “Husavik” is actually a fairly serious pop ballad that the Academy might actually go for. Radha Blank’s “Poverty Porn” from “The Forty-Year-Old Version” would make another inspired nominee, though the film’s profile is fairly low. Comedy nominations aren’t very common in Original Song, but “Ted” and “South Park: Bigger, Longer, & Uncut” were both nominated in the category.

The biggest question mark of the year remains “Judas and the Black Messiah,” but H.E.R. has a song called “Fight for You” in the film. With only a few critics who have seen the film, it’s hard to say if it’s going to be in play here.

My personal favorite of the year so far is “Green,” from “Sound of Metal.” The song isn’t available on music streaming sites yet, but composer Abraham Marder has confirmed the soundtrack is coming out soon. I’m doubtful that the song can snag a nomination, but I’ll be beating the drum for it the rest of the season.

This category is certainly in flux. I’m extremely confident in the first three picks getting nominated, but the remaining two spots could go in a dozen different directions. Here are my current predicted nominees:

Which songs are you predicting for Best Original Song? Do you think “Speak Now” is our winner, or am I getting ahead of myself? ​Let us know what you think in the comments section below or on our Twitter account. Be sure to check out our latest Oscar predictions here.