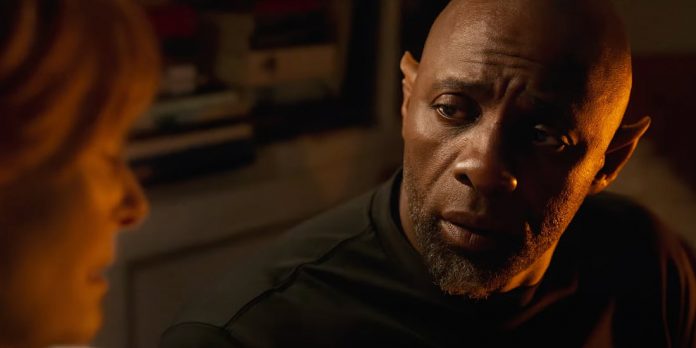 By Matt Neglia
​
United Artists Releasing and MGM have released the trailer for George Miller’s “Three Thousand Years Of Longing” starring Idris Elba & Tilda Swinton. The film will have its world premiere at this year’s Cannes Film Festival in a few days and will be released in theaters on August 31st, 2022.
​
​Click below to see the trailer.

​Plot Synopsis: Dr Alithea Binnie (Tilda Swinton) is an academic – content with life and a creature of reason. While in Istanbul attending a conference, she happens to encounter a Djinn (Idris Elba) who offers her three wishes in exchange for his freedom. This presents two problems. First, she doubts that he is real and second, because she is a scholar of story and mythology, she knows all the cautionary tales of wishes gone wrong. The Djinn pleads his case by telling her fantastical stories of his past. Eventually she is beguiled and makes a wish that surprises them both.

What do you all think of the trailer? Ever since we saw the first official photo of Idris Elba and Tilda Swinton, everyone has been wondering what kind of tone this film would take. Would it be a straight drama like MIller’s “Lorenzo’s Oil?” Would it be something as fantastical as “Babe: Pig In The City?” It turns out it’s a mixture of both of those, along with the creative ingenuity he and cinematographer John Seale (who returns as DP for this outing) brought to their action masterpiece “Mad Max: Fury Road.” The tone looks more fantastical than I previously thought, with lots of vibrancy and eye-popping visuals emitting from the highly imaginative mind of Miller. I’m not sure if it’s all going to come together, as a lot of that will depend on the screenplay. It might be too big for its own good, resulting in a giant mess in the end. The reactions and reviews out of Cannes will confirm whether this is yet another stunning masterwork from Miller or if it’s an ambitious, creative disappointment (*Update* Our review can now be read here). What do you all think? Let us know your thoughts in the comments section below or on our Twitter account.