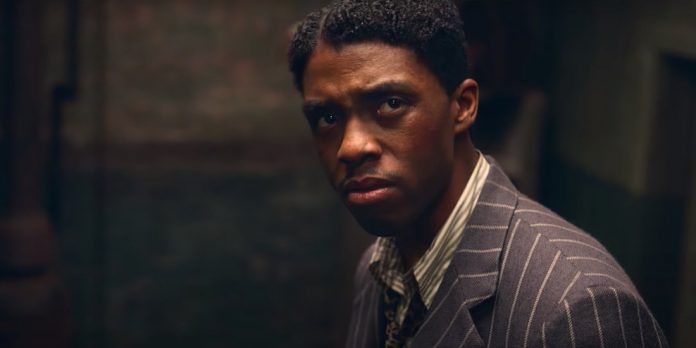 Plot Synopsis: Tensions and temperatures rise over the course of an afternoon recording session in 1920s Chicago as a band of musicians await trailblazing performer, the legendary “Mother of the Blues,” Ma Rainey (Viola Davis). Late to the session, the fearless, fiery Ma engages in a battle of wills with her white manager and producer over control of her music. As the band waits in the studio’s claustrophobic rehearsal room, ambitious trumpeter Levee (Chadwick Boseman) – who has an eye for Ma’s girlfriend and is determined to stake his own claim on the music industry – spurs his fellow musicians into an eruption of stories, truths, and lies that will forever change the course of their lives.

What do you all think of the trailer? Viola Davis looks to be delivering a transformative and commanding performance while Chadwick Boseman’s swan song looks to be lively and Oscar-worthy as well. The film appears more open and dynamic in terms of its cinematography and overall presentation, as it’s being adapted from the stage (based on an August Wilson play) to the screen. George C. Wolfe could be a threat for Best Director after having seen all of these wonderful elements (costumes, makeup, editing, production design, etc.) come together. Let us know your thoughts in the comments below or on our Twitter account.