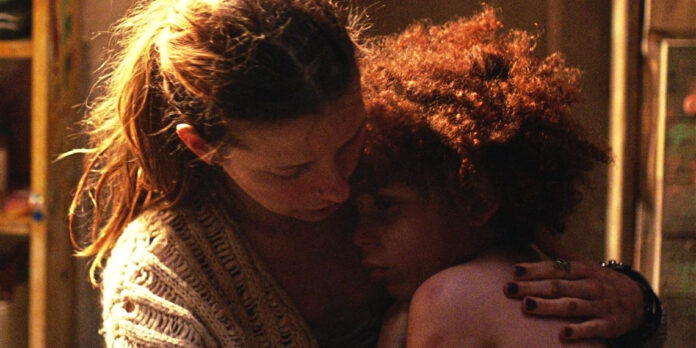 THE STORY – Deep in the underbelly of New York City, a five-year-old girl and her mother live among a community that has claimed the abandoned subway tunnels as their home.
​
THE CAST – Zhaila Farmer, Celine Held & Jared Abrahamson

​Coming straight from the underground and directly into our hearts, “Topside” was set to premiere earlier this year at the South By Southwest Film Festival but due to COVID-19, it recently premiered at the Venice Film Festival. Cast with mostly unknown actors and shot guerilla-style with a unique rawness that captures the poverty-stricken world that lies beneath any major city (but for the purposes of this movie, that major city is New York), “Topside” is not just a reflective look on the downtrodden. Rather, it’s a compassionate look at the bond between a mother and her daughter. Evoking memories of “The Florida Project” and “Room,” Logan George & Celine Held’s independent film is one you don’t want to miss.

Nikki (Celine Held) is a single mother living underground in New York City in abandoned subway tunnels with her 5-year-old daughter Little (Zhaila Farmer). When the authorities inform the people living down below that the subway is being renovated and that they’re now forced to relocate, Nikki has no choice but to bring her daughter topside. Seeing bright lights, birds, cars, and masses of people for maybe the first time ever, Little is overwhelmed by everything all at once as her mother tries to seek help for the both of them without running the risk of losing Little.

Logan George & Celine Held do a magnificent job at capturing the finer details that establish the home which Nikki and her daughter are inhabiting through excellent sound design and cinematography. We hear the rumbling of distant trains and the dripping of liquids from the surface. We see the faintest glimmers of light trying to pierce through the darkness. It’s all very well shot, backed by a delicate piano-based score that helps us to come to peace with this dirty and dark environment the same way our main characters are. it may not be much but it’s a life they’ve built for themselves within a community.

Directing, writing, and starring in her own film, Celine Held is a revelation as the irresponsible Nikki who is struggling to take care of her child, while refusing to let go of the life that she currently leads. She believes that being down below in the life they’ve built together is better than being up above in a life of uncertainty, where Little could be taken away from her by social services. It brings about an interesting debate on parental responsibility and what the best place for a child really is. Held is in a constant state of panic, exhaustion, and desperation as she tries to get help, even from her ex-boyfriend, played in a convincingly terrifying fashion by Jared Abrahamson who makes a big impact with very little screen time. It’s Held’s emotional connection as a mother though which pulls us in. Even though she’s imperfect and has made poor decisions that have led to her current situation, she still manages to get us to care for her plight. One scene in particular where she loses Little on the New York subway is horrifying in how it is shot and presented to the audience. We never break away from Nikki’s perspective while she’s searching for Little and we’re left wondering where her daughter is for what feels like an eternity. The anxiety becomes disorienting, not just to Nikki but to the viewer as well. This is only one of the many artistic decisions that Held makes which showcases what a wonderful talent she is both in front and behind the camera.

While Nikki is eventually forced to come to grips with the fact that Little never had a real home, “Topside” forces us to question “what is the best home?” Is it with the child’s mother? Is it with strangers, stuck in a system which will have psychological effects on the child later on in life? “Topside” beautifully examines this within its confined narrative to captivating effect, making the use of its small budget and its talented cast and crew to present a heartfelt story. The final few moments alone are enough to make anyone cry, as Nikki shows the audience and Little the kind of love that is difficult, the kind of love that breaks your heart, the kind of love that parents should be expected to give.