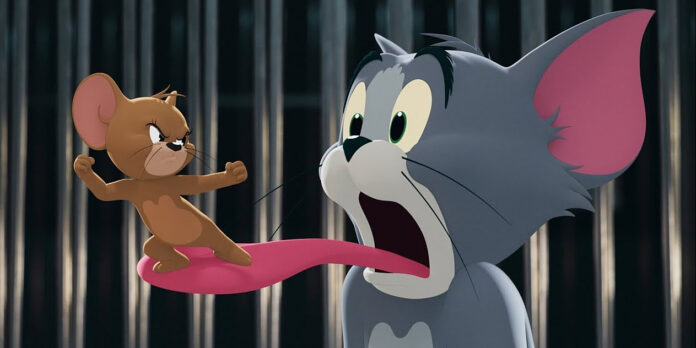 THE STORY – A legendary rivalry reemerges when Jerry moves into New York City’s finest hotel on the eve of the wedding of the century, forcing the desperate event planner to hire Tom to get rid of him. As mayhem ensues, the escalating cat-and-mouse battle soon threatens to destroy her career, the wedding, and possibly the hotel itself.
​
THE CAST – Chloë Grace Moretz, Michael Peña, Colin Jost, Rob Delaney & Ken Jeong​

​​​Many will undoubtedly walk into “Tom & Jerry” with a certain level of familiarity with the iconic animated duo’s previous outings on the big or small screen. In that sense, there is a nostalgic element to witnessing these two enemies going head-to-head once again. However, with an undercooked story, uncompelling characters and humor that never conveys as much life as its animation does, this latest outing for the cat and mouse is a disappointing waste of an opportunity.

Taking place in modern-day Manhattan, New York, cat and mouse frenemies, Tom and Jerry are both living separate lives. Jerry has recently started living in the Royal Gate Hotel, one of the city’s largest and most expensive hotels. His mere presence causes chaos for the staff due to a highly important Indian wedding planned for Ben (Colin Jost) and Preeta (Pallavi Sharda) at the hotel. Kayla (Chloë Grace Moretz) is a new staff member who is tasked by Terrance (Michael Peña), the hotel’s deputy manager, to come up with a way to dispose of Jerry. Her solution? Hire Tom, of course, because that’s always worked out so well before…needless to say, things don’t go as expected. Along the way, the two cartoon enemies must eventually set aside their differences to dispose of an even greater threat in the hotel.

The decision to see these cartoon characters realized on the screen in 2021 in 2D animation set against real-life backgrounds and actors is a refreshing one. It’s a style that we don’t see that often anymore in a world fully run by digital animation. All of the animals in “Tom & Jerry” are animated while all of the human characters are….well, played by humans. The film is working at its absolute peak, though when Tom and Jerry’s silly antics are at the forefront. The vibrant animation and old-school sound effects can’t help but bring a smile to your face as these two characters try to outmatch each other in a game of, you guessed it, cat and mouse.

While such silliness may work in a short format, for it to work in a feature-length film, there needs to be a great story and characters to guide us along that runtime. Sadly, “Tom & Jerry” has these two qualities in short supply. Rob Delaney, who plays the wealthy manager and owner of the Royal Gate Hotel, has a deadpan delivery of nearly every line of dialogue he is given. However, pretty much all of the human characters bring nothing meaningful to their individual roles. Michael Peña, who was previously hilarious in the “Ant-Man” films, can’t even make the material he’s given work in a memorable way. Chloë Grace Moretz has provided us with her fair share of impressive performances in recent years as she continues to grow in her acting career. While she’s light, likable and fun here as an ambitious and intelligent new-hire for the hotel who wants to make a good impression, the screenplay doesn’t give her enough opportunities to show us anything truly substantial. And the less that can be said about Colin Jost and Ken Jeong in their stale and uninspired roles, the better.

“I’m sorry. He’s a little animated,” says Jost’s character Ben at one point, about one of the animated animals in this movie. While I won’t go so far as to say that I demand an apology for this quasi-animated movie, it’s definitely far from what it could’ve been had the story or characters been fleshed out to be anything more than standard family-friendly fare. Flat cinematography and bizarre music choices (“Don’t Sweat The Technique” by Eric. B & Rakim and “Can I Kick It?” by A Tribe Called Quest….really?!) that don’t match the tone of this movie at all, also add to what amounts to getting hit over the head with an oversized hammer, or falling hundreds of feet till your body goes SPLAT!! Maybe the kids will love it but for the adults out there, these two legendary characters from our childhood deserved better.