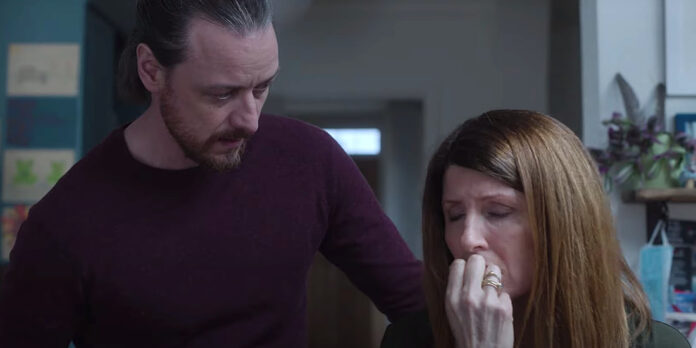 THE STORY – A couple are forced to re-evaluate themselves and their relationship through the reality of lockdown. She is a charity worker, a coordinator for all of Europe at a refugee charity. She’s the daughter of a dentist father and an `old socialist’ mother and the only grandparent still around. He, meanwhile, is a self-employed, self-made man who runs a boutique computing consultancy.

​We’ll inevitably see many projects set during the last eighteen months of the coronavirus epidemic over the next few years. What’s less clear is if any of them will be able to capture the feeling of being in quarantine as perfectly as Stephen Daldry’s comedy-drama “Together.” James McAvoy and Sharon Hogan play a couple stuck in their house with their son Artie (Samuel Logan), who experience all the highs and lows that this time had to offer, from learning how to grow food to dealing with the death of a family member. “Together” is able to replicate the emotional messiness of the year of lockdown for both its characters and its audience. “Together” is even more impressive considering it was filmed in Kensal Rise, London, for ten days. In June, the film was broadcast in the United Kingdom on the BBC and is now available for American viewers. While it definitely has a British feel to it and reflects the situation with coronavirus in the UK, the experiences are similar enough that American audiences will be able to relate.

The film is divided into segments by title cards with the date and a tracker of coronavirus deaths in the UK and checks in on the couple every month or so, starting at the end of March 2020. Each transition section also contains British news coverage from around that time to remind viewers of the growing status of the virus. The film opens with the couple arriving home from the shops with food and toilet paper to prepare for the lockdown beginning. They’re immediately at each other’s throats, both personally and politically. Here, directors Stephen Daldry and Justin Martin capture the confusion of those early days when it wasn’t even clear if people should be wearing masks. Over the months, the couple reminisces about their relationship, fight with each other, and worry about her elderly mother and how their young son is being affected by not being around other children.

The screenplay by Dennis Kelly is full of monologues, and both characters breaking the fourth wall to speak directly to the audience. In some ways, it makes it feel like watching an elongated YouTube vlog, despite the mix of static and moving shots. This format may turn some people off, but the monologues give a chance for the actors to really shine, and the dialogue is quick and witty. Both McAvoy and Hogan are excellent in their roles, running the gamut of emotions that people have experienced in quarantine. In particular, McAvoy’s character has a great arc of becoming more empathetic to people, particularly towards essential workers. The dynamic between the two of them is electric, and whether together or monologuing on their own, they’re enrapturing. They give the sort of performances that makes it difficult to look away.

The film occasionally has some trouble with pacing, but it does an excellent job balancing humor and pathos. A lot of the early humor draws from the contentious relationship between the couple and their banter. “Together” also includes many references to things that were popular during quarantine, from mentioning “Bridgerton” to using a song that went viral on TikTok in its closing. On the other hand, “Together” is genuinely very emotionally affecting, especially for anyone who has had a difficult time during the past eighteen months. Not only does it deal with the couple’s personal losses, problems, and the ups and downs of their relationship, but it also doesn’t shy away from criticizing the government’s poor response to the virus.

I didn’t realize that I hadn’t fully processed the events of the first year of quarantine until I watched “Together.” There were things that this film brought to the surface — my anger at people who weren’t listening to regulations, my frustration with the lack of information and the conflicting information, my disappointment in how governments around the world dealt with it — that I only now have realized I swept under the rug rather than dealing with them. But deeper than that, it wasn’t until watching “Together” that I finally started to process my uncle’s death from Covid-19 that occurred in the first months of lockdown. For some, it may be too soon to watch a project that deals with the events of the past eighteen months. But hopefully, some people, like me, will find catharsis through what we see play out on screen with McAvoy and Hogan.