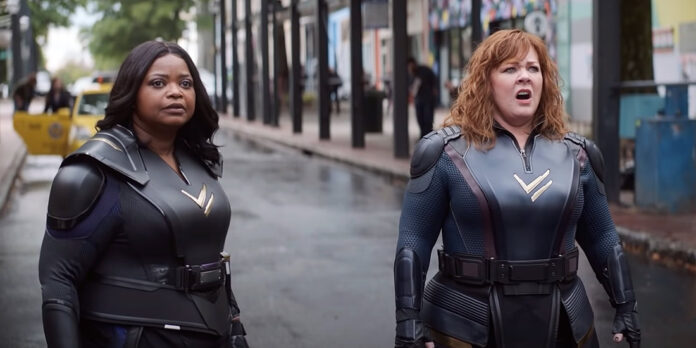 THE STORY – Two childhood best friends reunite as an unlikely crime-fighting superhero duo when one invents a formula that gives ordinary people superpowers.

​​​​Lately, there has been plenty of superhero content to choose from, whether you’re a DC or a Marvel fan. From the Snyder cut to the popular “WandaVision” and “The Falcon and the Winter Soldier” on Disney+ to the Sharkboy and Lavagirl follow-up, “We Can Be Heroes,” audiences are spoiled for choice. But Ben Falcone’s “Thunder Force” offers something a bit different. Octavia Spencer and Melissa McCarthy might seem like unlikely casting for a superhero duo, but this is McCarthy’s fifth collaboration with her husband, Falcone.

The film opens with a comic book panel-style introduction, explaining that in 1983, cosmic rays hit the earth and caused genetic mutations in a select few. It only affected those already given to sociopathic tendencies (the use of the word “sociopath” to describe the villains feels uncomfortable), who became evil superhumans known as Miscreants. Emily’s parents, scientists searching for a way to create good superheroes, were killed by the Miscreants, and she swore to one day complete their work and avenge them. It’s an exciting and somewhat original setup for a superhero film.

We first see Emily and Lydia as schoolchildren: Emily is an intelligent nerd, while Lydia is a slacker who stands up to bullies on Emily’s behalf. We then find them as teens, and Emily’s determination to “be something special” to make up for her parents’ deaths has only grown. When we next see the two, they’re adults who have been estranged since a fight in high school. Lydia (McCarthy) works as a heavy equipment operator but tries to fix things in her community broken by Miscreants.

She goes to try to convince successful scientist Emily (Octavia Spencer) to come to their 25th high school reunion but messes with something in the lab that causes Lydia to be injected with a super-strength serum that Emily had meant to use herself. The pair decide to team up and train to become the titular duo, Thunder Force. They begin to fight crime in the city, headed for a confrontation with the politician “The King” (Bobby Cannavale), who is the leader of a ring of Miscreants who wreak havoc for his political gain. Lydia also discovers a connection with The Crab (Jason Bateman), a man who has crab claws instead of hands in the midst of it all. (Yes, it’s as weird as it sounds.)

The best thing about the film is the new superhero representation that it offers. In movies, superheroes are primarily male and typically young, white, and thin. Meanwhile, Emily and Lydia are a middle-aged female duo. At one point, The King even asks, “How can we not stop two chicks in their forties?” The film is certainly aware of how rare this is but doesn’t focus on it too much. The superhero costumes by Jose Fernandez are also great as they’re practical and not overly revealing, like many female superhero outfits.

Another good aspect of the film is the female friendship that it portrays. Spencer and McCarthy have been friends for a long time, and that connection shines through on-screen. Emily also has a 15-year-old daughter, Tracy (Taylor Mosby), who bonds with Lydia over a shared love of video games and chatting about boys. The movie tries to delve into how Emily feels she has missed out on her daughter’s life because of her work but ultimately doesn’t have the time to flesh out this part of the plot.

While there is much to praise about the film, it, unfortunately, falls flat because of its humor. There are lots of scenes that feel unnecessary like Lydia drinking expired milk or making an Urkel impression. Many of the jokes don’t land, in particular an ongoing one about Lydia eating raw chicken, which only got more cringey each time it occurred. The camp approach to the action scenes, making them feel more like a children’s superhero movie than a Marvel or DC one, primarily works though sometimes it feels like there’s a lack of commitment to it.

“Thunder Force” has an interesting premise and is something refreshingly new for the genre. Both McCarthy and Spencer get to play roles that are a bit different from their standard fare and seem to be having fun. However, the side characters are underdeveloped, and the romance plotline fails to come together. Even in its action scenes, it feels like more of a buddy-cop comedy than a superhero film. While it certainly doesn’t stick the landing, it’s hard not to admire “Thunder Force” for putting a spin on an oversaturated type of story.