“THOSE WHO WISH ME DEAD” 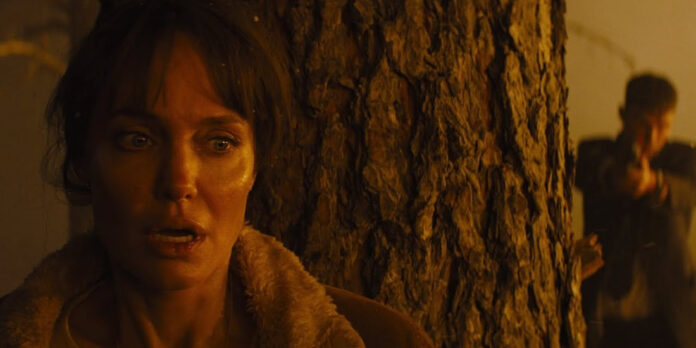 THE STORY – Still reeling from the loss of three lives, Hannah is a smoke jumper who’s perched in a watchtower high above the Montana wilderness. She soon encounters Connor, a skittish boy who’s bloodied, traumatized and on the run in the remote forest. As Hannah tries to bring him to safety, she’s unaware of the real dangers to follow: two relentless killers hunting Connor, and a fiery blaze consuming everything in its path.​

​​​​​​It’s been over ten years since we last saw Angelina Jolie in action movie star mode. After a long stretch which included more family-friendly films and her own directorial efforts, she has returned to team up with “Wind River” director and Academy Award-nominated screenwriter Taylor Sheridan (“Hell Or High Water“) for his adaptation of the 2014 novel “Those Who Wish Me Dead.” Sheridan has built a reputation for himself as a storyteller who is fascinated by the dark morality of the contemporary American midwest. He has often explored dramatic themes of class, war, poverty, the drug trade, and more in harsh neo-noir westerns that have captivated audiences and critics. While “Those Who Wish Me Dead” shares similar DNA to his previous films, it’s a leaner, bigger, and more straightforward feature from Sheridan that has nothing else on its mind other than to entertain. And in a climate that is sorely lacking mid-budget adult entertainment, that’s not necessarily a bad thing.

Taking place in the vast green mountains of Montana, “Those Who Wish Me Dead” is different in many ways from the novel it is based on, both in terms of its plot and its focus on the characters. Where the book focuses on the town’s sheriff, Ethan Sawyer (Jon Bernthal), Sheridan’s screenplay shifts towards Hannah Faber (Angelina Jolie), a veteran smokejumper who is suffering from PTSD following her failed attempt to rescue three little kids in a previous forest fire. One day, she comes across a young boy named Connor Casserly (A remarkably nuanced and emotive Finn Little) who is covered in blood by the creek. He is on the run from Patrick, and Jack Blackwell (Aidan Gillen and Nicholas Hoult, respectively), a father-son duo of highly trained and merciless assassins who previously murdered Connor’s father to protect specific special interests pertaining to their boss (Tyler Perry). And now, those secrets lay with Connor, who, if he escapes, will go to the press and leak the information that these men so desperately don’t want to get out. Armed and ruthless, the two assassins will stop at nothing, killing anyone in their path, including starting a wild forest fire to create a diversion to track down Connor and kill him.

Moving at a brisk 100 minutes, “Those Who Wish Me Dead” hits us hard and never stops its onslaught of brutal violence and escalating stakes throughout its entire runtime. We never find out what information Connor is carrying, nor do we ever get any additional commentary on the film’s central themes (is there meant to be a pro-environment message here?) or in-depth characters. The film wastes no time on any of that. Instead, Sheridan presents us with a heart-racing thriller that is meant to entertain us and nothing more. It’s rather refreshing as we don’t see films like this as much anymore when in the 90’s they were prevalent. What’s even rarer is to see an adult thriller like this with this sense of budget and scale. The raging fire that the characters find themselves caught in gives Sheridan a much larger canvas to play with (in this case, burn down) than he’s ever had before, both as a screenwriter and as a director. It’s a credit to Warner Bros. that they put up the money to back such a simple story.

An ample reason for that, I’m sure, has to do with Angelina Jolie being the film’s lead. Her name alone can still draw an audience, and her screen presence has not changed one bit in this kind of genre. She has a rugged natural sensibility that even when she’s playing an ordinary woman as she is here, you still very much believe she can go toe to toe with the Blackwells. And those two? Whoa! Sheridan does an excellent job of making these two genuinely terrifying in how efficiently cruel and meticulous they can be. It helps that they’re played by the naturally charismatic Aidan Gillen and Nicholas Hoult. Even though the screenplay doesn’t ever explore their characters to examine any deeper motivations, the two of them give their characters an attractively menacing quality that is irresistible. Where the screenplay lacks in character development, it makes up for it in making each character believable, resourceful, and intelligent. There is a real sense of cat and mouse being played between the Blackwells and everyone else, helping to drive “Those Who Wish Me Dead’s” plot forward. This propulsive quality is felt most with the characters of Ethan and his pregnant wife, Allison (Medina Senghore in a breakout role that will elicit more than a few cheers from an enthralled audience). They both could’ve been throwaway characters, but Sheridan incorporates them into the plot seamlessly and finds clever ways to keep them involved for dramatic purposes, which only fuels the tension as we grow to like these characters.

For those wishing for a straight-up action thriller made for adults, “Those Who Wish Me Dead” will provide the thrills and suspense they are craving. In a cinematic landscape dominated by franchises and superhero films, it’s refreshing to see a mid-budget movie with everyday people facing unimaginable obstacles in a real-world setting. It definitely does not go deep into any preachy themes or even explore the characters as thoroughly as I would like but in terms of sheer spectacle and entertainment? Sheridan delivers. One might wish for a little less CGI fire (Someone needs to tell studios that this will never look as good as real fire) and more introspective writing (there are more than a few dangling plot threads when the credits role). However, if you’re looking to turn off your brain for a bit to something other than the latest action franchise, this will be a fiery good time.