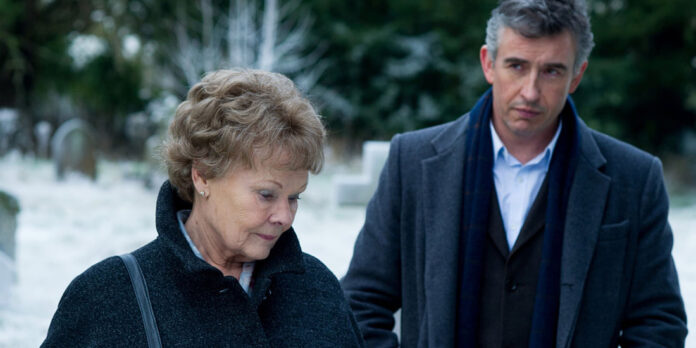 THE STORY – In 1952, Irish teenager Philomena (Judi Dench) became pregnant out of wedlock and was sent to a convent. When her baby, Anthony, was a toddler, the nuns took Philomena’s child away from her and put him up for adoption in the United States. For the next 50 years, she searched tirelessly for her son. When former BBC correspondent Martin Sixsmith (Steve Coogan) learns of the story, he becomes her ally. They travel together to America to find Anthony and become unexpectedly close in the process.

​”Philomena” is a curious film; a movie can rarely be so heartwarming and cozy, while it also makes me so angry on behalf of its characters. The 2013 drama directed by Stephen Frears tells the true story of a woman named Philomena Lee and her search for the son she was forced to give up fifty years earlier, with the help of government advisor turned writer Martin Sixsmith. The film stars Judi Dench and Steve Coogan, who both give excellent performances.

Based on the 2009 nonfiction book by Sixsmith, “The Lost Child of Philomena Lee,” it is the sort of story that would be hard to believe if it wasn’t true. As a teenage girl, Philomena became pregnant and was sent by her father to Sean Ross Abbey, a nunnery in a small town in Ireland. There, the nuns forced the young mothers to work in the convent laundry for four years after giving birth with only minimal access to their children who were eventually adopted, often by wealthy American couples, without their mothers’ permission. As an audience member, it is difficult not to react viscerally to the treatment of these young girls and their children at the hands of the Catholic Church.

In the film, we see flashbacks to Philomena as a young girl, but we also follow her and Martin on her search for her son, Anthony Lee. Martin, recently let go from his government job, plans to write a human interest story on Philomena and her child, but becomes emotionally invested eventually.

They’re an odd pair: she’s so warm and friendly, and he’s reserved and prickly. Dench gives a lovely and emotive performance and makes for a charming older Irish lady. But it is Coogan who is more of a surprise, as Martin beautifully transforms from someone rather detached and cold to someone more open through his friendship with Philomena.

The film raises interesting questions about the Catholic Church, religion, and forgiveness. In both the flashbacks and the modern-day, we see both cruel nuns and those who are kind. It is clear that the film doesn’t want to paint the entire Church as evil, particularly as Philomena herself has clung to her faith despite what the Church did to her as a younger girl. And yet, as an audience member, it’s easier to side with Martin, who is disgusted by what he discovers.

It’s difficult to watch the rhetoric used around sex, mainly aimed at these young girls. Even harder to fathom is that the Church got away with treating these girls so poorly, exploiting them for labor and taking their children away from them, through coercion if not outright force. But the message of the film is not bitterness and condemnation, but forgiveness. That is, perhaps, what makes the film so special.

“Philomena” did well when it was released, winning awards at Venice International Film Festival and TIFF. Eight years later, it holds up equally well as the sort of moving adult drama that we don’t see often enough. The story could seem overly dramatic, with its many twists and turns, if it weren’t based on truth. But with great performances and a touching story, “Philomena” will not only warm your heart but make you think about religion and forgiveness.