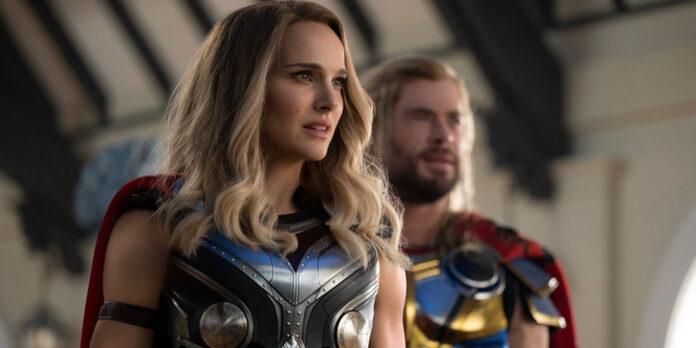 THE STORY – Thor embarks on a journey unlike anything he’s ever faced — a quest for inner peace. However, his retirement gets interrupted by Gorr the God Butcher, a galactic killer who seeks the extinction of the gods.
​
THE CAST – Chris Hemsworth, Natalie Portman, Christian Bale, Tessa Thompson, Jaimie Alexander, Taika Waititi & Russell Crowe
​
THE TEAM – Taika Waititi (Director/Writer) & Jennifer Kaytin Robinson (Writer)​
​
THE RUNNING TIME – 119 Minutes

​2017’s “Thor: Ragnarok” was an incredibly unique Marvel film. Under the direction of Taika Waititi, it was able to reimagine the character of Thor (Chris Hemsworth) while also breathing new life into the very formulaic Marvel Cinematic Universe (MCU). Waititi and Hemsworth brought color, creativity, and humor into the God of Thunder’s world, opening the door to avenues that weren’t originally possible when the character made his MCU debut in 2011 with Kenneth Branagh’s “Thor.” The film scratched an inch for a general audience and MCU fans: they crave more than the typical, predictable superhero movie they receive once every few months.

“Thor: Love and Thunder” takes that concept up a notch. Back in the director’s chair for the second time, Waititi tackles Thor post “Avengers: Endgame,” a common place for most Phase 4 entities to begin. Thor has teamed up with the remaining Guardians of the Galaxy members and claims he is doing ‘great.’ But in reality, he is incredibly lonely. After all, during his time in the MCU, Thor has lost his father, brother Loki (several times), girlfriend, and fellow Avengers. He is one of the characters in the MCU who has suffered a tremendous loss, which has led him to be closed off, afraid to connect with others in fear of what might happen to them.

But Thor soon hears word that Gorr, ‘the God Butcher’ (Christian Bale), has been killing all the Gods he can find and has attacked New Asgard. He returns to help King Valkyrie (Tessa Thompson), where he also finds his ex-girlfriend Jane Foster (Natalie Portman). But here, Jane is wielding a reconstructed Mjolnir and, as a result, has possessed Thor’s powers. Together, the three, along with Korg (Waititi), go on an adventure to defeat the God Butcher and, maybe, reconnect and correct past mistakes.

Director and now co-screenwriter, Waititi has what seems like complete creative control over the God of Thunder for his second outing. Or at least the most creative control Marvel has given a director in recent times. Together, Waititi and Hemsworth create magic and continue their successful collaboration, enhancing the character and his world to levels never before seen in the previous Thor films. In a universe where the superhero genre has become so serious and weighted down in a predictable display, it is refreshing to see a cast have so much fun with this kind of material. Hemsworth continues to shine brightly in this adaptation of the character. Thor is hilariously funny yet also empathic to the point that the comedy never undermines the dramatic moments. After playing the character for over a decade, he can still find nuance and depth to make his performance feel fresh and engaging every time. Hemsworth’s Thor is a charming and lovable superhero. Plus, his chemistry with Waititi’s Korg and Thompson’s Valkyrie is magnetically endearing, even though Valkyrie, unfortunately, doesn’t have much to do on her own this time around.

Natalie Portman also makes her return to the MCU after nine years as Dr. Jane Foster. With the 2015-2018 ‘The Mighty Thor’ comic as one of the film’s major comic influences, Portman now has much more to do with the character than before. She is no longer just a love interest but an actual, fully fleshed-out character. Here, Foster has her own issues and battles instead of just supporting Thor’s journey as she did in the first two films. There is a specific reason she wants and is able to wield Mjolnir, and it is wonderful to watch Portman play Jane’s internal conflict while also figuring out how to be a superhero as Mighty Thor. It is as if Portman has never left. She is invigorating and empowering, much like Linda Hamilton’s Sarah Connor in “Terminator 2: Judgment Day.” Even though Jane has undergone a massive transformation, she is still the character we love and know, and Portman is phenomenal at balancing that duality as she and Hemsworth have some of the film’s best emotional moments.

Another standout is Bale as Gorr the God Butcher, Marvel’s best villain since Thanos. He is astonishingly terrifying, which is a true rarity for the MCU and Disney. Waititi and Bale embrace the tragic nature of a true supervillain, resulting in a frightening but sympathetic portrayal. It might lean a little bit into camp at times, but Bale’s spectacular performance is key to believing that there are significant stakes at hand in the film. Even with a general light tone, Bale’s Gorr reminds the audience that there are severe risks at hand, strengthening the story and making him a worthwhile adversary to such powerful heroes.

Just when you think the story is becoming too bleak, Waititi is constantly throwing a joke or two in for good measure to keep the story light enough for all audiences to enjoy. While the cast all receive their moments to make us laugh, the bulk of this humor comes from Russell Crowe, as the Greek god Zeus, who Thor and his friends come to seek help against Gorr. It’s a sequence unlike anything else the Academy Award-winning actor has ever done. It is likely to generate howls of laughter for his outlandish, over-the-top portrayal that wouldn’t fit in any other film except under Waititi’s direction. And if that doesn’t get you laughing, the usage of a pair of screaming pet goats who help Thor and his friends travel across different worlds surely will.

It’s evident that Marvel Studios and Disney trust Waititi and it is so exhilarating to see a director at Marvel Studios have an active, visionary say in their filmmaking process. Like “Thor: Ragnarok,” it is as much of a Taika Waititi film as an MCU film. “Thor: Love And Thunder” isn’t looking to set up another franchise or universe; it just focuses on the characters at hand, making it stand out in a post-Endgame MCU. But it still manages to expand stylistically on what a superhero film can look like, with one sequence featured in black and white standing out as some of the most striking imagery ever conjured up in an MCU film. Nevertheless, having a film focus on the character’s journey instead of expanding the world and overpopulating it with cameos results in a much more entertaining and engaging viewing experience.

“Thor: Love and Thunder” is one of Marvel’s strongest films. The set pieces are grand, creative, and stimulating. The soundtrack filled with classic rock n’ roll music is awesome, and the screenplay balances the romance, comedy, and dramatics exceedingly well for an under two-hour runtime. The stakes are felt, most of the jokes land, and the character’s journeys, notably Thor, Mighty Thor/Jane, and Gorr’s, are well-written and performed. “Thor: Love and Thunder” is a step-up from “Thor: Ragnarok” in terms of exhibition, wit, emotion, and maturity. It’s exactly what a superhero movie should be: full of spectacle, heart, inspiration, escapism, pure magic, and most of all: fun. It is an exceptionally enjoyable time at the movies and a perfect summer blockbuster, reminding us in this oversaturated market why we fell in love with these films in the first place.