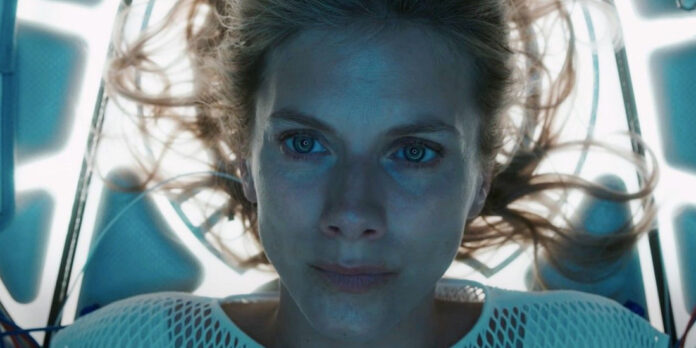 THE STORY – A woman wakes up in a cryogenic chamber with no recollection of how she got there, and she must find a way out before running out of air.

Two years ago, director Alexandre Aja took on quite a daunting task by choosing to solely set his aquatic horror thriller “Crawl” – starring Kaya Scodelario and Barry Pepper as a father-daughter duo dueling with alligators during a category five hurricane – in one singular location, centering all the action around his leads’ flooded home and deriving as much suspense from this site as possible. In lesser hands, such a call could’ve cheapened the film’s fear factor considerably, limiting the fright we felt as Scodelario and Pepper fought for their lives while remaining relatively confined to such specified surroundings. Thankfully, with Aja’s acute attention to detail, he was able to amplify the anxiety of this atmosphere significantly and still deliver a thoroughly terrifying creature feature. With his latest film, “Oxygen,” Aja puts even more physical restraints on the scope of his storytelling, but he continues to be just as capable at inducing alarm in his audience, no matter how “small” this situation may seem.​

“Oxygen” wastes no time getting to the “meat” of the narrative, almost instantly opening on our lead Elizabeth (Mélanie Laurent). She awakens in a cramped cryogenic chamber with no memory of how she arrived there whatsoever. Before long, she is greeted by MILO (voiced by Mathieu Amalric), an AI meant to assist in any medical matters, who unfortunately informs her that parts of her cryo pod have been damaged, and her oxygen is set to run out in a little over an hour. As Elizabeth works with MILO to make contact with anyone in the outside world who can potentially rescue her from this horrific fate, she simultaneously attempts to piece together the fragments of her frazzled memories that briefly recall a professional background in scientific studies and recognizing recollections of her husband (Malik Zidi). Most of all, she strains to search for any reason she would’ve been caged in this chamber in the first place, potentially unearthing sinister secrets about her past in the process.

Though Aja deserves appropriate accolades for rarely, if ever, letting this narrative lag despite the limitations placed on its scale, it must first be noted that screenwriter Christie LeBlanc provides the film with a formidable foundation thanks to her skillful and sturdy script, which also happens to be her first for a full-length feature. “Oxygen” isn’t without a few occasional lulls, especially while we wait for revelations to reinvigorate the story at the start of the second act; however, for the most part, the picture moves with punctual pacing, and much of that is due to how LeBlanc dutifully doles out the many twists and turns. With savvy structuring, she slowly peels back the layers of the movie’s mystery, refusing to resolve its central conundrums with haste and instead, keeping us consistently involved in Elizabeth’s confusion. As a result, we only gradually piece the puzzle together, always anxiously awaiting any further tantalizing teases as LeBlanc faintly foreshadows future reveals waiting in the wings.

Aja’s decisive direction cunningly complements LeBlanc’s storytelling sensibilities. He accentuates Elizabeth’s anguish with his claustrophobic camerawork and assures that we palpably perceive her mental and physical pain as she exerts all her energy to escape either the confinement of the cryo chamber or the mania of her mind. The ever-present threat of time is apparent in LeBlanc’s script as well. Still, it’s Aja who truly highlights this hazard, often concentrating on close-ups of Elizabeth’s panicked panting or erratic expressions to detail her dread and the impending doom that awaits should she not succeed at finding a way to withstand her current woes. Aja is assisted appreciably by Robin Coudert’s sonorous, synth-based score that imbues the film with supplemental stress and Jean Rabasse’s pristine production design, depicting Elizabeth’s cryogenic coffin as a technological triumph that would be admired in awe, were it not now the potential cause of the catastrophic calamity.

Besides flashes of faces from her past glimpsed as Elizabeth sifts through her scattered memories, Laurent is the only actor responsible for holding our attention throughout “Oxygen’s” 100-minute runtime (much like Ryan Reynolds in 2010’s “Buried” or Tom Hardy in 2014’s “Locke”). And yet, the “Inglourious Basterds” actress is more than capable of accomplishing such a feat, inhabiting the role with raw realism and persuasive physicality and truly immersing herself in the intensity of Elizabeth’s endeavors. As her survivalist instincts kick in throughout the latter half of the film, Laurent tackles this transition with truthfulness, and, as a result, every one of Elizabeth’s emotions feels earned – from the crushing concern that follows a failed plan to the ecstatic elation that occurs after an effective effort to outwit her cryogenic captor. Even while being limited corporeally and forced to lie down for most of the film, Laurent anchors “Oxygen” with her forceful face acting alone. And thanks to this convincing commitment, there isn’t a single scene where we aren’t wholly invested in her fight for freedom.

When all is said and done, “Oxygen” may not leave much of a lasting impression, but in the moment, it’s virtually impossible not to be entirely engaged in Elizabeth’s spine-tingling struggles, constantly craving a beat of reprieve to catch your breath as the suspense becomes utterly suffocating. With a script that thoughtfully integrates the story’s twists and turns for maximum emotional impact, direction that comprehensively captures the lead character’s consuming claustrophobia, and a central performance that places us right in the thick of our protagonist’s turmoil, “Oxygen” is genre filmmaking at its finest and a sterling start to this summer of scares in cinema.