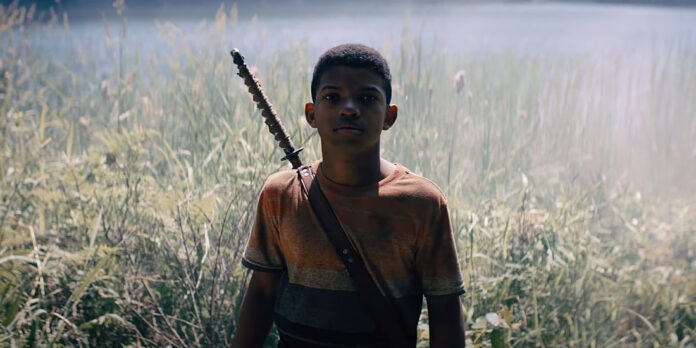 THE STORY – Gunner (Chavis) sets out on a quest to save his ill mother (Dawson) by searching for a mythic figure who possesses the secret to immortality, the Water Man. After enlisting the help of a mysterious local girl, Jo (Miller), they journey together into the remote Wild Horse forest — but the deeper they venture, the stranger and more dangerous the forest becomes. Their only hope for rescue is Gunner’s father (Oyelowo), who will stop at nothing to find them and in the process will discover who his son really is.
​
THE CAST – David Oyelowo, Rosario Dawson, Lonnie Chavis, Amiah Miller, Alfred Molina & Maria Bello

​​It is always interesting to see the directions that actors’ careers take when they make their directorial debuts. Some like Bradley Cooper (“A Star Is Born“) and Kevin Costner (“Dances With Wolves”) have made films that presented them with roles that would allow them to showcase their acting abilities. Then there are some like Paul Dano (“Wildlife”) and Robert Redford (“Ordinary People”) that made their directorial debuts because they simply had a story or message that they wanted to share. “The Water Man” is in the latter camp. Although actor-turned-director David Oyelowo (“Selma”) does star in the film, “The Water Man” clearly is more interested in telling a story and studying grief than it is in showcasing Oyelowo’s acting chops. Far from a vanity project, “The Water Man” is a simple, earnest film that aims to speak to children and families during times of grieving, and to simply, tell a good story.

Running only about 90 minutes in length, Oyelowo’s debut is lean and efficient. 12-year-old Gunner (played by “This Is Us’” actor Lonnie Chavis) is adjusting to a new town while his mother (Rosario Dawson) battles leukemia. He buries himself in books and drawing, and acts out in macabre ways like visiting the funerals of strangers. Meanwhile, his father (Oyelowo) struggles to relate to his son and accept the fact that he might soon become the sole parental figure for a child he doesn’t entirely understand. When Gunner stumbles across a local legend involving a legendary figure of folklore known as The Water Man, who reportedly holds supernatural healing powers, he runs away on a journey to find this mystical figure, alongside fellow runaway named Jo (“War for the Planet of the Apes’” Amiah Miller) who purports to know the location of The Water Man.

Narratively, there is very little uniqueness going on here. The plot beats go as expected, as does the inevitable third-act reveal. We’ve seen similar stories about fantasy and reality merging in children’s minds in order to cope with grief before in films like “A Monster Calls,” and we’ve seen too many “kids set out on a wilderness adventure” stories to count. Indeed the script is the film’s weakest part across the board. Aside from a few moments of natural dialogue describing a local Chinese restaurant that only plays Country Top 100 music, most of the film’s writing feels clunky.

Of course, Oyelowo isn’t aiming his film at film snobs who parse dialogue relentlessly. He’s making a film that can be accessed first and foremost by children. And the writing is sufficient to accomplish that goal. Where the film truly excels is with Oyelowo’s direction. He has a natural eye for dynamic images as scenes are well lit and framed with dynamic camera movement. His background as an actor lends itself to a keen understanding of blocking interior scenes. He even inventively incorporates 2-D animation at times to heighten the film’s feel of magical realism.

The film’s sound design stands out especially, as scenes in the wilderness involving forest fires, wild horses and startling flocks of birds are immersive and even allow for a jump scare or two. The score, courtesy of Peter Baert (“Facades”) is gorgeous, as are a handful of songs written specifically for the film. Depending on which studio acquires the film, they could even contend in this year’s Best Original Song Oscar race.

Finally, Oyelowo, Dawson, and Chavis deliver strong performances, despite having to sell some on-the-nose dialogue. Their work allows Oyelow’s directorial debut to have an emotionally invested & successful conclusion. In short, the film’s writing holds it back from greatness, but Oyelowo’s direction compensates. It marks him as a promising director, who shows an ability to care far more about storytelling than promoting himself as a star. As a family film, it is excellent, and will likely perform well with kids on any streaming service that eventually acquires it.