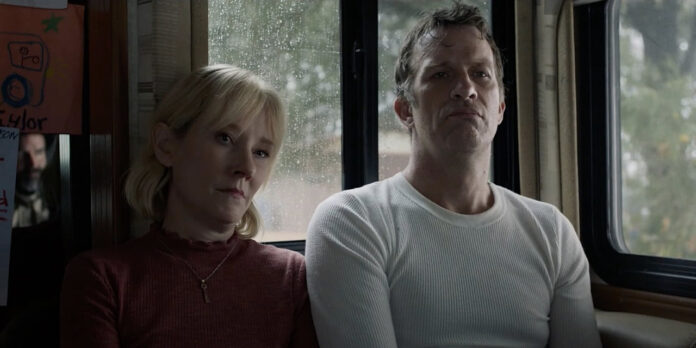 THE STORY – A family vacation takes a terrifying turn when a couple discover their young daughter has vanished without a trace. Stopping at nothing to find her, their desperate search for the truth leads to a shocking revelation.

What would a year be without a mystery film about a missing child? “The Vanished” is just that, as it tells the story of Paul (Thomas Jane) and Wendy (Anne Heche) whose daughter vanishes without a trace after they arrive at a lakeside campsite. From the beginning, the film sets up suspicious suspects: the extremely hostile owner of the site, the young drug addict groundskeeper, and the couple staying next to Paul and Wendy who seem to have relationship troubles. The film spins down a long and winding road of mysteries that are solved as quickly as they appear – in this mundane and abysmal thriller that ends with a baffling plot twist.

Once Paul and Wendy find their daughter to be missing, they’re immediately on opposite ends of the grief spectrum. Paul tries to reason with Wendy as she quickly begins to spiral, her aggravation with the police not allowing them to join the search for their child soon consuming her. There’s word of an escaped convict milling around the surrounding woods, so the couple decides to take matters in their own hands and disobey the orders of the police. They come across a sleeping man in the woods who they assume to be the convict, and after a quick scuffle – matched with a gorgeous fire-lit shot – they accidentally kill him. This propels the couple into a world of madness and grief that threatens to not only destroy their relationship, but everyone who comes in contact with them.

The film quickly falls apart as it tries to juggle its thriller aspects and family drama themes, with Jane and Heche giving subpar performances. Heche tries her best – there’s a scene where she finds out the person in the woods was not the convict she thought he was, and she slowly breaks down while trying to hide her emotions from the officer delivering the news. But along with this are strikingly awful instances of acting where it’s obvious the script is giving the actors nothing to grasp on to. The emotions these two actors try to set up don’t work because the characters they’re playing are unbearably bad people. Grief is hard to process, but by ostracizing everyone in sight and taking matters into their own sloppy hands, Paul and Wendy become the villains of their own story.

There’s finally an explanation for the couple’s actions and a conclusion to the film’s loose ends, as in the last 15 minutes, the film halts with a jarring plot twist. “The Vanished” sets itself up to be a straight forward film: Is the missing child alive or isn’t she? And if she isn’t, then who took her? To give the viewer a staggering twist made for a blockbuster thriller abandons the lacklusterness of the film’s first 80 minutes, and clearly tries to desperately push for an ending that will have audiences talking. But if an audience is talking about this plot twist it’s because it takes you by so much surprise that the only thing you can do is laugh. It’s an unfathomable writing choice that fully propels the film into absurdity.

In the end, “The Vanished” has nothing that sets it apart from any other thriller you’d find at your local convenience store. It’s sloppy and downright boring at times, which makes it all the more disappointing when a gorgeously lit shot – a lake illuminated by the lights of police cars – arrives and takes you by surprise. There are two stunning shots that the film delivers, but they both occur in the first 25 minutes, and any artistic vision is completely abandoned from here on out. What was obviously a film trying to be about the impact of grief and trauma on the mind, quickly turns into a schlocky and unimpressive sophomore feature with its most memorable moments also being its most absurd.