“THE UNITED STATES VS. BILLIE HOLIDAY” 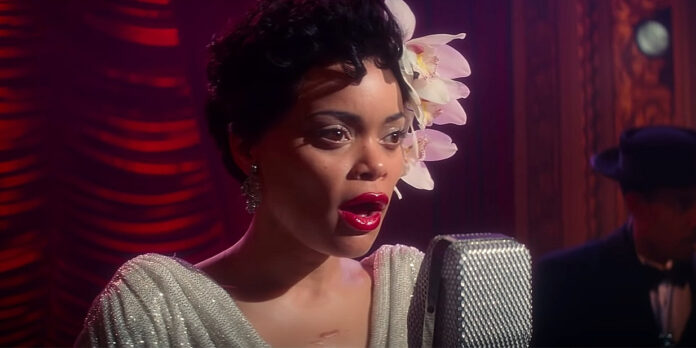 ​​”The United States vs. Billie Holiday” opens with title cards stating that in 1937, a bill went before the Senate to ban the lynching of African-Americans but was not passed. It is an interesting way for a film about Billie Holiday to start, considering that the government pursued her for continuing to sing a song about lynching, “Strange Fruit.” Unfortunately, Lee Daniels’s film doesn’t live up to its intriguing set-up and falls into standard biopic conventions.

Suzan-Lori Parks’s screenplay is based on Johann Hari’s book, “Chasing the Scream: The First and Last Days of the War on Drugs.” The film focuses on Holiday’s drug usage and how the government persecuted her for it in lieu of being able to imprison her for singing a controversial song. It seems like the film’s focus should be clear, but it meanders during its over two-hour runtime and seems to get lost in unnecessary side plots.

The film is framed through Billie (Andra Day) giving an interview in 1957 with the older white Reginald Lord Devine (Leslie Jordan), who asks her questions like “What’s it like to be a colored woman?” and calls her “silly” and “a troublemaker.” This framing device gets in the way more often than not and also isn’t entirely logical considering that the film follows all the way through to Billie’s death.

The film flashes back in time to ten years earlier. We see Billie looking glamorous while performing onstage, meeting fans after the show, and taking drugs. Despite the advice of those around her, she’s determined to continue singing “Strange Fruit.” Meanwhile, government agents meet to plan how to keep her from singing the song and decide that the easiest way to stop her will be to put her in jail for drug use. (There are so many scenes of her using drugs in the movie that “Billie Holiday used drugs” almost feels like an accidental main takeaway from it.)

Jimmy Fletcher (Trevante Rhodes) befriends Billie to get close to her when in reality, he’s a federal agent. The way that they try to humanize him, even as he continues to work against Billie, is somewhat uncomfortable in a biopic about her, particularly as they become romantically entangled.

There are so many characters introduced throughout the film that it is somewhat difficult to keep track of Billie’s relationships. The film attempts to cover too much and ends up jumping around a lot. It gets a bit lost in exploring Holiday’s relationships. Though we see Tallulah Bankhead (Natasha Lyonne) get questioned about Billie’s bisexuality, we don’t see enough even to have our own opinion on it. The movie cyclically goes over the same issues without ever finding any new revelations.

Despite this, Day gives an outstanding performance and does a fantastic job capturing Holiday’s distinct voice. A bit reminiscent of Renée Zellwegger in “Judy,” Day’s performance is so pivotal that the film suffers anytime she is not on screen. Whether she’s in the throes of drug addiction or crying in the church over the death of her dog, Day does her best to show the complex woman that Holiday was. It’s a shame that the film is so unmoored by the time it reaches the end as Day is particularly moving as Billie nears the end of her short life.

Paolo Nieddu’s costumes do a lot of work in recreating Holiday’s presence, especially the beautiful gowns that are recreations of Holiday’s actual dresses. The hair and makeup are also impressive, as is the production design. However, there are some strange cinematography choices, particularly in the scenes of drug usage. At times, it seems like it is trying too hard to be artistic without much payoff.

Day performing “Strange Fruit” is arguably the best part of the film. It’s just a shame that the hour and a half of the movie before it is such a slog. Even Day’s fiery performance cannot save the unfocused script that fails to give us a true insight into Holiday’s life or the government’s pursuit of her. You’re probably better off watching Audra McDonald in “Lady Day at Emerson’s Bar & Grill” (a live performance that was filmed for HBO and is available on BroadwayHD). “The United States vs. Billie Holiday” tries to be something different, but this too-often dull biopic fails to live up to the legend it’s about.