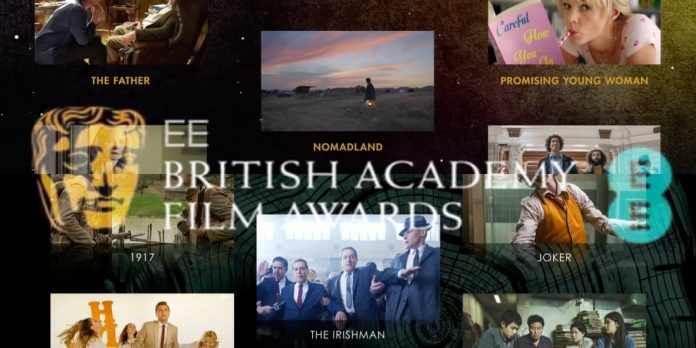 When many Oscar pundits turned on the stream for the 2021 BAFTA nominations reveal, there was hope that specific categories would be clarified. However, this year some new rules have shaken up the nominees and given some names that none of us could have predicted. After the drama of last year’s nominations, it is time to look at the rule changes and analyze the impact of this year on the BAFTAs going forward.

Two significant changes that have come about between the past year are how certain categories are voted in. To start, there was a shortlist created of 15 contenders for every single category this year, and members were asked to watch every single contender to be able to vote in the category. Instead of considering hundreds of films for every category, this brings the list of films down. The BAFTAs then use an online logging system to verify that members have watched every contender to create a fair voting system.

Not only that, but for this year, the Director and Acting categories were decided by a small jury of 7-12 selected members to make the nomination line-up. This is different compared to last year, in which every eligible member was allowed to vote for the nominees in those categories. The rest of the categories, including Best Picture, are still decided on by the entire voting body, and as a result, fewer drastic nominees were seen across the board.

In 2020, the films that got the major nominations were the same ones that were sweeping awards season. Looking at the top nominations for the show, “Joker” earned the most nominations with eleven, followed by “The Irishman” and “Once Upon a Time in Hollywood” with ten before the big British contender of the season “1917,” claimed nine nominations. Aside from categories such as Outstanding British Film and Outstanding Debut by a British Writer, Director, or Producer, there was no strong voice for the British film industry outside of “1917.”

This year, the BAFTA nominations do a much better job representing the British film industry, steering away from predicting the Oscar nominations. Two of the five films for Best Picture, “The Father” and “The Mauritanian,” are British films. Not only that but British film “Rocks” tied with “Nomadland” for the most nominations at 7, while “Calm with Horses” also got some major nominations. This led to the underperformance of several major Oscar contenders, with “Promising Young Woman,” “The Trial of the Chicago 7” and “Mank,” all missing out on big nominations such as Best Director and the Acting categories.

Some people were surprised at the nominations for “Another Round,” “Rocks,” and “The Mauritanian,” which both had great showings and strong nominations across the board. Still, those films make sense for the British voting body to nominate looking back over the past five months. Out of the films that showed at the London Film Festival, including “One Night in Miami,” “Small Axe,” and “Wolfwalkers,” it ended up being “Another Round” that took home the Best Film prize. Not only that, but the London Critics Circle embraced “Rocks” and “The Mauritanian” with several major nominations, with “Rocks” taking home Best Picture.

One other important rule that came into play for this year, due to the pandemic, is that a film that was meant to be released but couldn’t due to the closure of cinemas could still contend for this year’s award. This has led to frustration as it has meant that distributors have held back on distributing the films to the public, with Best Picture contenders “The Father,” “Nomadland,” and “Promising Young Woman,” potentially winning a BAFTA before the British public can even view the film. This is a reason why seeing nominations for films such as “Rocks” and “The Mauritanian,” both available to watch right now, may also help benefit the viewings for the BAFTA awards as fans will be able to actually say whether the nominations were worthy.

The reason why the new rules were put into place, specifically for the Acting categories, was down to the backlash of last year’s nominations. In a year with many fantastic performances from black and Asian actors and actresses, not a single non-white person was nominated. While the Oscars weren’t much better, nominating only Cynthia Erivo for her role as Harriet Tubman in “Harriet,” it started a conversation of #BAFTAsSoWhite, highlighting the fact that Margot Robbie was nominated twice for Best Supporting Actress when Jennifer Lopez and Zhao Shu-zhen were both contenders that could have diversified the category.

This rule change has undoubtedly made a difference when looking at the nominations in the acting category. In every category this year, there are only two white nominees, and the rest are made up of black or Asian actors and actresses. Being able to see Youn Yuh-jung and Alan Kim make it in for “Minari” is wonderful to see, and yet BAFTA was still able to reward British films in the process by having nominees from “Rocks” and “The Mauritanian.” It doesn’t feel forced for diversity, but it truly feels like they were awarding some stunning performances that weren’t noticed by any other voting branch this year.

What will be interesting to see now is how these nominations impact the voting process for the winners. Voters are still required to watch every film when voting on a category, but there will not be a special jury to decide on the winner. With the voting opened up to every member, is there a chance that we will go back to seeing more predictable winners such as the “Nomadland” sweep for Chloé Zhao and Frances McDormand?

I feel some categories are still going to follow the pattern of every precursor, particularly Chadwick Boseman and Daniel Kaluuya. The Actress and Supporting Actress categories have been quite unpredictable this season, so there is room for the BAFTA voting body to reward a different performance and show off some more fantastic British talent. I would be more than happy to see Vanessa Kirby get her first important precursor win here for “Pieces of a Woman,” and I do think it is possible that the voting body connects with that performance and rewards it. If not, keep your eye out on “Rocks” to perform well, considering the wins it got at the London Critics Circle.

I am still unsure if I love the idea that a tiny group of people decides the Acting and Director categories’ final nomination list. However, the decision is innovative, and it has led to the result that we got with the BAFTA nominations being diverse and representative of British audiences. Not only that, but the system of checking the films that members watch is something that should become a standard, as voting members of any organization should consider every film they watch and not just the major contenders. I hope that more voting bodies learn from the BAFTAs and make sure that they have a distinct voice that truly represents them, as not everyone has to predict the Oscar nominations.​

What do you think is going to win at the BAFTAs this weekend? What do you think of the nominations this year? Do you want to see the same process used next year? Let us know your thoughts in the comments section below or on our Twitter account.