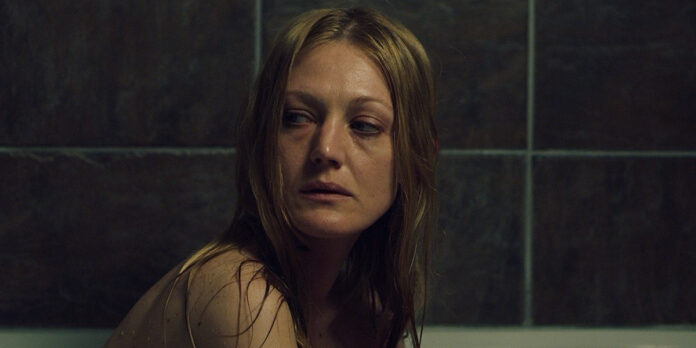 THE STORY – Holly seems to have it all: two kids, a nice house, a good job as a teacher, and a husband with his career on the way up. But there are troubling signs that all is not right in her world. The insomnia. The medication for the insomnia. The dreams from the medication for the insomnia. (Are they even dreams?) And then there’s the mouse that appears in her home. Upsetting her already delicate balance, it sends her spiraling out of control. Writer/director Dean Kapsalis’ feature debut explores a week in the life of a woman on the verge in this haunting meditation on mental illness.

​​​​“The Swerve” is something of a paradox. It is both a hyper-specific portrait completely focused on one individual’s life and a purposefully vague look at her struggles. It paints a detailed picture of her existence while still holding the audience at an arm’s length when it comes to giving a name to what exactly she is struggling with. This narrative clash helps to make the story of our main character’s downward spiral even more tragically realistic. Aided by an incredibly harrowing lead performance from Azura Skye, “The Swerve” confidently and unsparingly puts the audience in the headspace of its troubled protagonist.

The woman at the center of “The Swerve” is Holly. On the outside, it would seem that her life is fairly picturesque: a good teaching job, two sons and a husband whose career is on the rise. But something is missing for Holly. When the story begins, she is obsessing over an invasive mouse that’s been spotted in their kitchen. Combined with an apparent case of insomnia, her fixation activates a mental spiral that is exacerbated by her tense relationship with her troubled sister and signs that her husband may have a wandering eye. Things come to a head one night when, after a confrontational family dinner, Holly has an aggressive encounter while driving before abruptly waking up in a disoriented state at home. What exactly happened that night? Did Holly imagine a terrible accident or did it actually occur?

The combination of Holly’s fully fleshed out life and history with the non-specificity of her mental troubles works to both put the audience in her head while not entirely letting us in on all of her secrets. This mirrors the way that her family looks at her – even those who know her best can’t know all that she contains. And the fact that the film never puts to exact words what is bothering Holly actually works to its benefit. Is it merely insomnia? Or an all-encompassing depression? Could her briefly-mentioned past history of eating disorders be coming back to haunt her? It’s possible that not even Holly knows the answer. This narrative choice adds believability to an already brutally grounded story that offers little cause for optimism. Unfortunately, this purposeful vagueness may be why the story does at times feel a bit meandering, but that untethered quality only further helps to put the audience in Holly’s headspace.

Writer/director Dean Kapsalis effectively captures his characters in a bleak and desolate light, both in terms of the film’s color palette and with the slow-paced editing and lightweight camera movements. He has essentially crafted a biosphere of melancholy for Holly to live in. Everything about the film is meant to make us feel as hopeless as Holly, and most importantly, Skye portrays the character with an unflinching quality that permeates in every moment she’s on-screen. We are with her for nearly the entire runtime of the film and Skye never makes the same choice twice. She devours the film while simultaneously giving off the impression that Holly views herself as a supporting character in her own life story. It’s an impressive feat of both technical skill and emotional depth. If nothing else, Skye makes the film worth watching.

“The Swerve” is a handsomely made and thoroughly engrossing look at the darkest possibilities of the mind. It’s reminiscent of the gripping character studies that Hollywood used to make and it’s not hard to imagine that this would star a powerful actress like Jill Clayburgh or Ellen Burstyn if it were made in the heyday of adult-minded studio cinema. Luckily, this film is anchored by a ferocious performance from Azura Skye that even those legendary actresses would be lucky to match. This film is unyielding, unforgiving and an impressive visual depiction of how a mental spiral can truly feel.

Powered by JustWatch
Share
Facebook
Twitter
Copy URL
Previous article
The Next Best Picture Podcast: Episode 213 – What Can The Oscars Learn From The Emmys? “Sound Of Metal” & “Supernova” Trailers
Next article
“DICK JOHNSON IS DEAD”