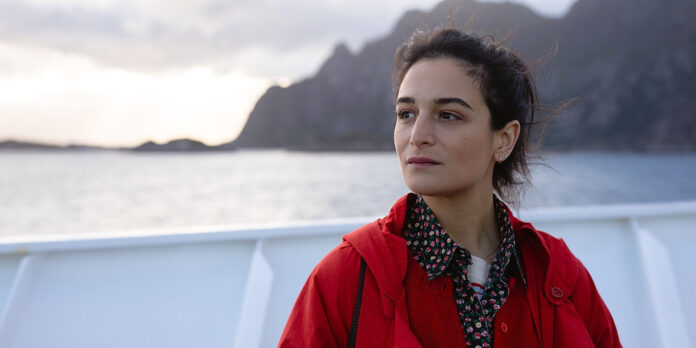 THE STORY – Frances is an aspiring painter who decides to take on a role as an assistant for a Norwegian painter in Lofoten – a place where the sun doesn’t set. There she meets eccentric locals and a fellow New Yorker, all the while trying to find herself as an artist. ​
​
THE CAST – Jenny Slate, Alex Sharp, Zach Galifianakis, David Paymer, Jessica Hecht, Fridtjov Såheim & Gillian Anderson
​
THE TEAM – David Wnendt (Director) & Rebecca Dinerstein (Writer)

It is rather unfortunate that the first words we hear in “The Sunlit Night” are, “It’s lazy,” because “lazy” is certainly one of the words that come to mind when thinking of this film. “Uninspiring” is another. In fact, there is a list of words that can describe “The Sunlit Night” and “original” doesn’t appear on it. The film currently has an 8% rating over at Rotten Tomatoes, and reading the reviews from other critics is far more exciting and enjoyable than actually sitting through the entire film. You would expect from a film featuring some real comedic talent, like Jenny Slate and Zach Galifianakis, that there would be some redeeming aspect of “The Sunlit Night,” but there really isn’t.

Jenny Slate plays Frances, a quirky twenty-something living in New York who’s an aspiring artist trying to make it big in the art world. You know Frances is quirky because she still lives at home with her parents (David Paymer and Jessica Hecht) and she shares a bunk bed with her sister. With her parents separating, and her sister moving out and getting married, Frances decides to take up a role as an assistant to a Norwegian painter named Nils (Fridtjov Såheim) who’s based in Lofoten. Nils is in the process of painting a barn yellow as part of an art exhibition. “It’ll put me on the map,” he says to Frances, and he means that literally because that’s the level of humor here.

The film earns its title from Lofoten, an archipelago so far north that the sun never sets during summer. The location is stunning which allows for some beautiful wide, landscape shots (but it would be impossible to shoot this place and make it look ugly). Of course, Frances is a right “fish out of water,” but she quickly adjusts to life in Lofoten. As you can probably predict she begins to find herself as an artist. All of this accompanied by the most indie/alternative soundtrack that you can imagine, as if someone had simply pressed play on an ‘I hate Mondays’ playlist from Spotify.

There are some really puzzling elements in this film that simply don’t work. The quick, sudden friendship that blossoms out of nowhere between Frances and Nils feels unearned. They bond over cheese and wine and the next thing you know he’s inviting her for a fish supper. However, this is nothing compared to the strange romance between Frances and a Brooklyn baker, Yasha (Alex Sharp), who has traveled all the way to Lofoten to give his father a traditional Viking funeral. In fact, it’s Yasha who has a far more interesting storyline, especially concerning his relationship with his father and his estranged mother (Gillian Anderson). A film about a young Russian boy who goes on an epic journey to give his father a Viking funeral is far more original than the tale of a young, quirky artist trying to discover her talent. In complete honesty, Frances’s art is just so ordinary and Slate presents us with a character who already seems fully formed and knows herself.

The other minor characters are another aspect of this film which seems puzzling. Anderson plays a Russian woman with a very dodgy accent that belongs in a James Bond parody, and Zach Galifianakis plays an American who has reinvented himself as a Norse chieftain (but he really has very little to do with the plot). Aside from Sharp’s Yasha, the only other remotely interesting character is Såheim’s Nils, but we never discover why he’s so distant and moody. For a film about quirky characters, it seems a shame that none of them are allowed any space to grow and develop.

The fault may lie in the fact that the writer (Rebecca Dinerstein) of the book that the film is based on penned the screenplay. Sometimes it can work to bring on the author as a screenwriter, more often than not it seems to be more of a hindrance. Perhaps there’s more character development in the book, but here we care so little about the lives of the people depicted on-screen. The film’s tone also shifts dramatically from serious drama to almost slapstick humor, but none of the comedy works. Not even Slate and Galifianakis can deliver their lines with enthusiasm and energy, and all the actors seem to phone it in as if they’re simply there for the paycheck.

The use of voiceover narration is excruciating as Frances refers to famous pieces of art that remind her of the people she encounters, but aside from this, the film never illustrates her passion for art, the key piece of her character. She’s also perhaps one of the most unlikeable, uninteresting, and annoying characters that you’ll come across this year.

Luckily, the film’s runtime is rather short which is an absolute blessing. The cinematography by Martin Ahlgren is fairly decent, and as mentioned earlier, the location shots are impressive to gaze at. However, there’s the use of montage and time-lapse that feel overplayed. There’s nothing particularly wrong with David Wnendt’s direction but you get the impression that he’s hardly thrilled by the material. Overall, you’ll have a more enjoyable time going off to paint your own barn yellow.