“THE SPINE OF NIGHT” 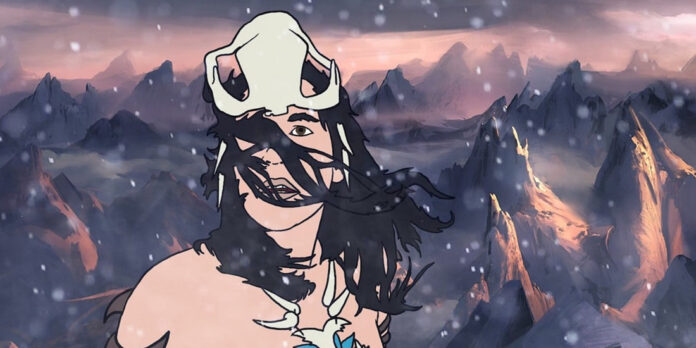 THE STORY – When ancient, dark magic falls into sinister hands, a group of heroes from different eras and cultures must band together to defeat it at all costs.
​
THE CAST – Lucy Lawless, Richard E. Grant, Patrick Breen, Betty Gabriel, Patton Oswalt & Joe Manganiello

“The Spine of Night” wears its nostalgia firmly on its sleeve. It’s a throwback to the sword and sorcery epics of the 1980s when teenage action was intermingled with sex, violence, and ruthless villains. Of course, the trick with throwback films is one has to thread the needle between obvious homage and innovation. Engaging with the tropes and aesthetics and of an outdated style suggests that there’s something to be added.

On the aesthetic front, there’s plenty that “The Spine of Night” brings to the table. The rotoscope animation is strikingly fluid, especially when set against the gorgeous backdrop paintings. There are tons of great shots littered throughout the film, particularly when the characters are forced to rough it in the wild. The application of textures like smoke and fire enhance these backdrops further, pulling us into a world that feels, at all times, compellingly frightening.

Directors Morgan Galen King and Philip Gelatt and their animation team deserve to be commended for what they were able to accomplish. The animation feels indebted to the past (the works of Ralph Bakshi are an obvious touchstone here) while maintaining the benefits of modern technology. It utilizes the benefits of both while doing away with the flaws they inherently bring.

The plot is told in a loose anthology format, as Tzud (Lucy Lawless) and the otherworldly Guardian (Richard E. Grant) reflect on various instances of human corruption. These stories are effective on their own, especially when they lean into the blood and guts mayhem lurking underneath the civility of each confrontation. Still, the overarching theme of corruption loses its weight after an hour and a half of reminding.

Despite clocking in at a slim 94 minutes, “The Spine of Night” overstays its welcome. The narratives are broad and obvious, which is not a sin in and of itself, but they are broad and obvious in all the same ways. The film may have fared better had it stayed the course with a single story or pursued stories that riff on different elements. As it stands, it’s caught in dramatic limbo, where it can only figure out ways to restate the same cautionary message.

Another area in which “The Spine of Night” falls short is the cast. There are certainly some inspired choices here, with Lawless, Grant, and Betty Gabriel being ideally suited to their cutthroat roles, but others feel disjointed or even distracting at times. It’s the same to assume that Patton Oswalt is an enormous fan of the animated films that inspired “The Spine of Night,” but he voices his sadistic king with the same caustic delivery we’ve heard from him in dozens of comedies. It releases the tension from his scenes and pushes them alarmingly close to feeling like an Adult Swim sketch. Joe Manganiello fares a bit better (he also has a less recognizable voice), but his delivery feels similarly at odds with the material.

Ultimately, your enjoyment of “The Spine of Night” will vary depending on your expectations. If you’re hoping for a multilayered anthology story that emphasizes world-building, then you will come away disappointed. If you’re going into the film wanting an uber-violent (I cannot stress this enough, the film is impressively gory) and action-packed throwback, then you will be thrilled.