“THE SECRETS WE KEEP” 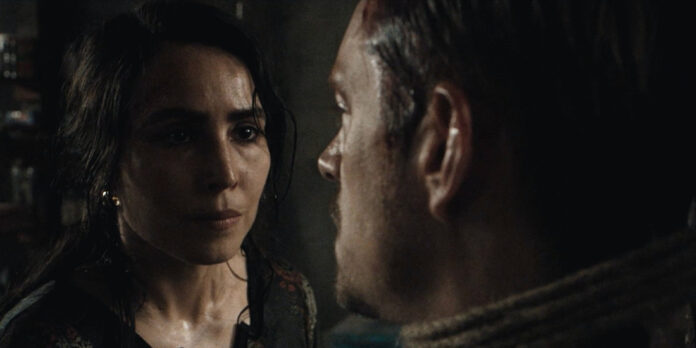 THE STORY – In post-World War II America, a woman, rebuilding her life in the suburbs with her husband, kidnaps her neighbor and seeks vengeance for the heinous war crimes she believes he committed against her.
​
THE CAST – Noomi Rapace, Joel Kinnaman & Chris Messina
​
THE TEAM – Yuval Adler (Director/Writer) & Ryan Covington (Writer)
​
THE RUNNING TIME – 97 Minutes

A truly great film has the possibility of not only being immensely entertaining but also bringing an interesting thematic discussion to the table. These films can present a somewhat challenging subject matter that engages in a fascinating dialogue which only makes them more worthy to be seen and debated. It’s the mark of great storytelling when subjects that are spotlighted offer a unique perspective that is worth prodding. There is no doubt that much of “The Secrets We Keep” aims to do just that, but it is unfortunately marred by a poor execution that doesn’t recognize the true complexity of its premise.

Set in a small American town in the 1950s, the film follows Maja (Noomi Rapace), a woman who is attempting to rebuild her life after surviving the horrific events of the Holocaust a few years earlier. She is married to the town’s doctor (Chris Messina) and is successfully maintaining a somewhat stable lifestyle for herself. That is until she crosses paths with another man (Joel Kinnaman) who she is convinced is actually a German soldier that tortured her and killed most of the group she was fleeing with, including her sister. She ends up incapacitating and holding him hostage in her basement. Thus begins the difficult task of keeping their crime hidden from the neighborhood as well as questioning if Maja’s suspicions are truly accurate.

At the center of this story is the premise of an intriguing mystery. Not only is there the complication of maintaining the secrecy of this plan but also a question as to whether or not the validity of the claims holds any merit. It’s ripe for an intriguing discussion on moral ambiguity that sadly isn’t delivered. Yudal Adler’s bland and unassuming direction struggles to make the tension feel poignant and therefore, much of the interest in the story is lost. Not much of the filmmaking makes an impact in getting an audience invested in the unfolding of this story.

However, the true failures here lie in the screenplay by Adler and Ryan Covington. While interesting ideas are weaved throughout, it’s the poor execution that sinks most of this potential. The characterizations all feel weakly developed with murky, opaque motivations. The ethical dilemma has some promise, but also comes across as quite shallow in its commentary and is now well explored. Very little is given a proper setup and the entire story is built upon the weak foundation. There is a somewhat interesting analysis of the effects of trauma and the psychological aftermath it leaves behind, but the script rarely finds the right moments for these observations to feel compelling.

Most of the actors do their best to save the film, and to their credit, there is a decent attempt to do so. Rapace does showcase depth and complexity in her portrayal of a woman desperately seeking a resolution to her past pain and regrets. However, all of that is because of her performance and very little comes from the character as written. As such, despite her impressive efforts, she feels constrained by the limitations of the writing. Kinnaman actually provides what is probably the best performance as he manages to find the complex layers of empathy and distrust with his characterization. He finds a way to elevate the material and create a fascinating character to watch. It’s not groundbreaking, but it is by far the most intriguing element the film has to offer. Messina is a reliable player for sure, but his role is unremarkable and therefore doesn’t leave much impact either. There is also an appearance from Amy Seimetz as the captive man’s concerned wife, but it is another example of a good performer being wasted by a nothing role.

The performances are certainly doing the heavy lifting in “The Secrets We Keep” and that is greatly appreciated, even when other elements of the film are nowhere near as successful. Despite some capable turns from some members of the ensemble, the story never finds a truly provocative method of exploring its premise and ideas. What is on display is a shallow examination of a moral quandary that never finds the dialogue worthy of much exploration where it all ends up feeling tedious and unfilled by the end. It’s a shame that such promise in this story ends up failing to deliver and that missing potential of such alluring ideas is what makes most of the film such a flat exercise.