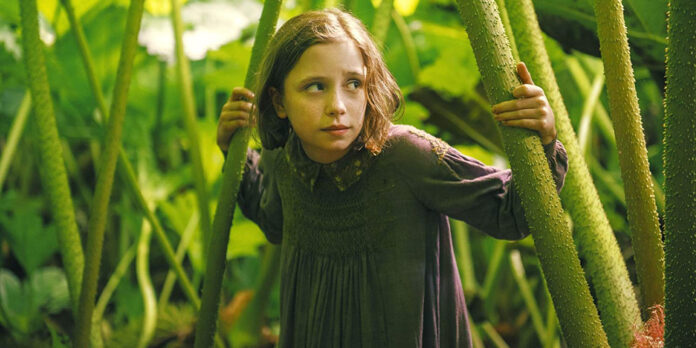 THE STORY – When Mary Lennox’s parents suddenly die, she is sent to live with her uncle, Archibald Craven, on his remote country estate deep in the Yorkshire moors. While exploring, she discovers a hidden magical garden.

​​​In the newest film version of the classic English children’s novel, “The Secret Garden,” the word that most accurately sums up the general feeling and purpose of this adaptation is “wonder”. Seen through the eyes of our main character Mary Lennox (Dixie Egerickx), the dual settings of a gothic manor and the enchanting titular garden are portrayed as contrasting play areas. The foreboding hallways of the mansion and the lush greens of the garden are shot with a similar sense of awe, albeit in different senses of the word. Unfortunately, the choice to focus on feeling rather than story makes this interpretation of “The Secret Garden” disappointingly hollow.

The famous story follows Mary Lennox, a recently orphaned young girl who is sent from India to live with her distant uncle (Colin Firth) in his estate in northern England. Upon her arrival, she discovers the manor to be ornate but bleak and poorly kept. She spends her days exploring the vast grounds of the estate until she finds the titular secret garden. With her new friend Dickon (Amir Wilson), Mary hopes to use the garden’s restorative powers to help her sickly cousin Colin (Edan Hayhurst), who has spent his days shut away in his room. The trio finds a private haven in the garden, and they seek to explore its many mysteries.

The garden itself is appropriately wondrous, featuring plants from disparate climates and with magical appearances. Whether the otherworldly powers on display in the garden are real in the world of the story or merely figments of our characters’ imaginations is ultimately unimportant as the children’s impressions of their private world are what matter. There are seemingly endless montages of the children (first Mary by herself, and eventually joined by her two playmates) running through and exploring the garden. And similarly, in the eerie manor. Mary is seen in wordless montages walking through the halls and exploring the rooms. The repetitive mood-setting montages can only work for so long, and after a bit, it isn’t hard to wonder when the plot is actually going to make an appearance. These dialogue-free moments are expected to do a good deal of heavy lifting on the screenplay’s behalf in terms of establishing character and fleshing out backstories – a bit surprising given the literary background from which the story is derived.

This isn’t to say that these filmmaking choices don’t look great. It’s hard to be entirely bored by these moments when the art direction and cinematography are both excellent. The manor is properly spooky and sparse, and the garden is almost extraterrestrial in its lushness. We’re also treated to occasional visualizations of Mary’s reminiscences of her past with her parents, and these flashbacks are often melded to the present in ways that constantly surprise.

Perhaps the smartest decision the film makes is to anchor the narrative with Mary. We see nearly the entire movie from her perspective, which means adults are often overheard in other rooms or seen from a distance. These stolen moments of observation are indicative of how children often make discoveries about the lives, both past and present, of grown-ups around them. We learn things as Mary does, and as such, we’re quickly bonded to her.

For fans of the source material’s famous story, this version of “The Secret Garden” may disappoint with its focus on mood and emotion rather than plot. Still, these moods and emotions are captured handsomely, and even in their hollowness, they’re engaging to watch.