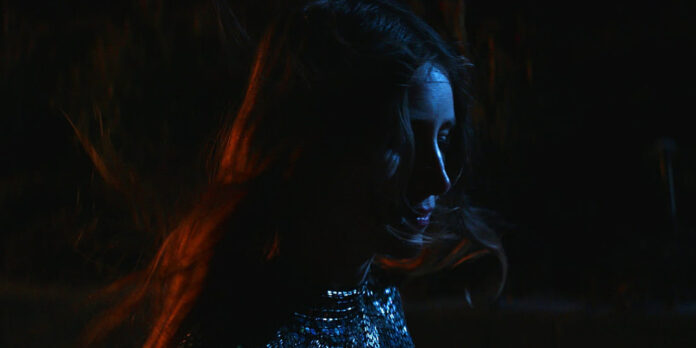 THE STORY – A woman’s conviction that she will die tomorrow spreads like a contagion through a town.

​It’s a strange thing to be writing about a film entirely produced before the COVID-19 pandemic that focuses on a sort of contagion passed from character to character. It’s also strange to write about that film after its SXSW premiere was canceled due to the pandemic. While none of this impacts the film itself or the filmmaker’s intent, it’s impossible for that to not impact my viewing of “She Dies Tomorrow.” Curiously, our present circumstances add a layer of surreality to an already surreal film, making its themes all the more impactful.

There’s nothing traditional about “She Dies Tomorrow” from writer-director Amy Seimetz. The premise is simple, and summed up perfectly with the movie’s official logline: “Amy thinks she’s dying tomorrow… and it’s contagious.” Kate Lyn Sheil stars as Amy, full of existential dread and certain she’ll be dead tomorrow. She tries to convince her friend Jane (Jane Adams) of her impending doom, but Jane thinks Amy is just relapsing into alcoholism. Jane can’t shake off Amy’s words though, and soon, the creeping dread comes for her as well. This contagion begins to pass from person to person as Jane then tells of her fear to her brother Jason (Chris Messina) and sister-in-law Susan (Katie Aselton), who in turn pass it to others.

In a sense, this is a disaster movie. It’s about some form of destruction that our characters must survive, or at least come to terms with. There’s a world in which this story would take on a similar tone to thrillers like “Contagion” or “The Grey.” Instead, Seimetz crafts this film with a methodical tone, filling the viewer with some of the same dread that the characters experience. Rather than explosive action or fits or terror, Amy appears calm as her apparent fate dawns on her. She’s fearful but almost resigned to death. The film is restrained and quiet, with long stretches without much dialogue. This may prove trying for some viewers, but it makes for a much more introspective and riveting experience.

In “She Dies Tomorrow,” death isn’t brought about by a virus or meteor crashing to earth. For the doomed characters, they see their fate revealed in visions of flashing colors and lights, beautiful abstract imagery that almost hypnotizes the victims and implants them with their internal doomsday clock. This slow-motion apocalypse spreads slowly but surely through in-person visits from victims – yet another reminder of the actual pandemic we’re living through in the real world.

There are none of the clichéd answers to the question, “If you have one day to live, what would you do?” These characters don’t go and live out wild fantasies. While telling Jane that she’ll die tomorrow, Amy lays on the hardwood floor of her house. “I wanna be useful in death,” much like the trees that died to make that floor. Rather than panic, the characters become introspective, each eventually sifting through their lives. Two friends of Susan’s are eventually infected as well, and use this moment to have an open conversation about their stagnant relationship. Seimetz’s screenplay shines in these moments, allowing her characters to naturally reveal themselves in their most honest state.

“She Dies Tomorrow” is bizarre and otherworldly, but that somehow creates a more believable and haunting experience. It’s a tragic and unsettling film, but also somehow freeing. There’s freedom in mortality and in knowing your fate. There’s even more freedom in accepting it. Seimetz shows tremendous restraint with this film, focusing more on the internal effects of their doom. It’s quiet but packs a powerful punch that you won’t shake off quickly.